Beterbiev picks Bivol over Canelo for next fight

By Sean Jones: Artur Beterbiev says he wants WBA 175lb champion Dmitry Bivol next, NOT his victim, Canelo Alvarez, for his next fight for the undisputed after his sparkling second-round knockout victory over WBO champion Joe Smith Jr. last Saturday night in front of a large crowd at Madison Square Garden in New York.

A fight against Canelo hasn’t been mentioned for a good reason. He’s scheduled to fight Gennady Golovkin on September 17th.

As bad as Canelo looked against Bivol in his recent thrashing, it’s not a forgone conclusion that he’ll defeat the 40-year-old Golovkin. I wouldn’t be surprised if GGG does a number on Canelo, finishing the job Bivol started last May.

Losing to Golovkin wouldn’t be all bad for Canelo. At least then, he could have more time on his golf, which seems to be his main focus, rather than boxing.

Canelo looked like he’d lost a significant portion of his game, which may have been well disguised due to his choice of opponents since late 2018.

Before fighting Bivol, Canelo had mainly focused on facing paper champions at 168 and 175 from this bunch:

Fighting those lesser belt holders arguably helped Canelo hide the deterioration in his game. Unfortunately, when Canelo got in with Bivol, he put a spotlight on the wear & tear on the Mexican star, exposing what’s left of his game to the light of day.

“Yes, because they always talk, they always talk like they want to fight for next. Okay, let’s do it,” said Artur Beterbiev to K.O. Artist Sports when asked if he wants WBA 175-lb champion Dmitry Bivol next after his second-round destruction of WBO champion Joe Smith Jr. last Saturday night.

“Yes, I want this fight,” said Beterbiev when asked if he wanted Bivol over a fight with Canelo Alvarez.

I can’t say I blame Beterbiev for wanting to fight Bivol over Canelo because it would be a no-win situation for the talented two-time Olympian if he chose Alvarez. Even if he beats the living daylights out of Canelo as Bivol did, he won’t receive any credit. Alvarez looked washed and one-dimensional at this stage of his long career.

Boxing fans will point out that Bivol already got to Canelo before him, showing that the Mexican star’s game has gone downhill, perhaps due to his preoccupation with his hobby, playing golf.

In what was the worst performance of the Mexican superstar’s career, Canelo was recently battered around the ring by the unbeaten Bivol on May 7th.

Even Floyd Mayweather Jr. didn’t make Canelo look as bad as Bivol did in his dominating victory over the former four-division world champion.

“Nobody ever talk about the other yet to us, but, of course, we have to focus on Joe Smith. That was a very serious challenge. We’ll see. We’ll take maybe a week or two. We’ll speak with Top Rank about what is going to be the next step for Artur,” said Beterbiev’s coach Marc Ramsay to K.O Artist Sports when asked about his reaction to Anthony Yarde being at ringside.

“Of course, Artur is 37, and what he wants to do is unify the titles. Even if you ask him if he prefers to fight Canelo, even if Canelo brings more money still today, he would like to fight Bivol. It’s not for the money.

“It’s not for the name that we have something against Bivol. It’s just that he has one belt, and Artur wants the fourth. That’s the end of the story. It’s not about money for him, and it’s nothing personal. It’s very legacy. He wants to be the best he can,” said Ramsay. 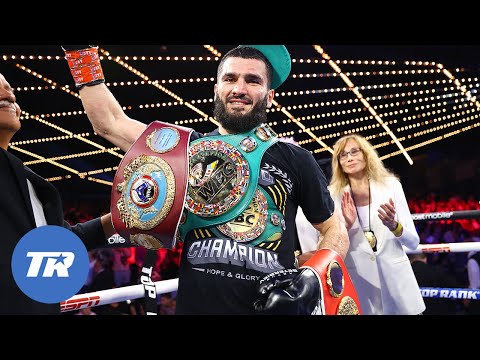 Robeisy Ramirez not interested in Shakur Stevenson rematch, wants to become undisputed at 126 »