Morrell (7-0, 6 KOs) has already expressed interest in facing Benavidez (26-0, 23 KOs), and now it’s just a matter of the promoters for the two fighters putting the match together.

Both fighters want to battle undisputed super middleweight champion Canelo Alvarez, but it’s unlikely that either will be given a shot in the next year.

Canelo has got his plate full with fights against Gennady Golovkin in September, a stay busy match in December, and a likely rematch against WBA light heavyweight champion Dmitry Bivol in May 2023.

The unbeaten Morrell (7-0, 6 KOs), who comes from Cuba, has quickly snatched a world title with the WBA after just four fights and has already successfully defended it three times.

“All the trash you were talking. No more running let’s make this fight happen. no more ducking let’s give the fans a great fight, grow some balls,” said Jose Benavidez Sr, calling out WBA ‘regular’ super middleweight champion David Morrell to face his son, Benavidez.

There would be a lot of interest from hardcore boxing fans in a fight between Benavidez and Morrell. However, the casual fans wouldn’t pay attention to this fight in the same way, and it wouldn’t attract the same amount of interest.

The former two-time WBC super-middleweight champion Benavidez has been blasting through his opposition since losing his WBC 168-lb title on the scales in his fight against Roamer Alexis Angulo in 2020.

It hasn’t been easy for Benavidez to be given a chance to win back his World Boxing Council 168-lb with Canelo holding the belt.

With Canelo showing no interest in fighting Benavidez, the only way the fight can happen is if the WBC orders the match, but they’ve been slow to make that move for obvious reasons.

If the WBC orders Canelo to face Benavidez, he’ll likely vacate the strap in the next instance, as they tried to force him to fight Gennadiy Golovkin in 2016.

The southpaw Morrell looks pretty good, but we haven’t seen him fight any live bodies yet since he turned professional in 2019. Although Morrell is a secondary champion with the WBA, holding the ‘regular’ 168-lb title, he’s beaten mostly, fringe-level guys. He hasn’t fought anyone solid yet.

Benavidez is viewed as the #1 fighter at 168 right now, and he’s been trying to get Canelo Alvarez to fight him, but the superstar hasn’t shown much interest.

While Canelo does hold all four titles at 168, he picked them up off the paper champions Caleb Plant, Billy Joe Saunders, Rocky Fielding, and Callum Smith. 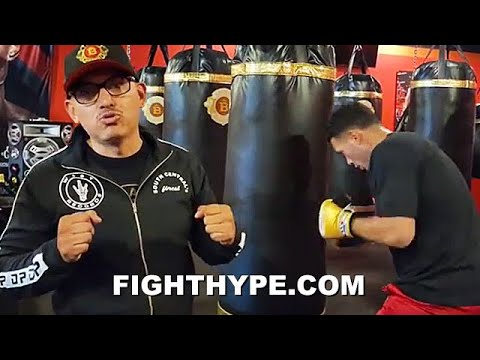