Anthony Joshua thought he was winning in Oleksandr Usyk fight

By Charles Brun: Anthony Joshua admits that he believed that he was winning his last fight against Oleksandr Usyk and was surprised when it was announced that he’d lost the fight.

How Joshua (24-2, 22 KOs) could be so disconnected from the reality inside the ring is strange because he should have known that things were going badly for him.

It’s the trainer’s job to let their fighters know when things are going badly for them, and it’s uncertain whether Joshua’s former coach, Rob McCracken, had been giving him updates on how the fight was progressing.

If not, then it’s perhaps a good thing that Joshua has swapped McCracken out for American trainer Robert Garcia for his rematch with IBF/WBA/WBO heavyweight champion Usyk (19-0, 13 KOs) on August 20th in Jeddah, Saudi Arabia.

“I swear I thought I was [winning],” Joshua said of his first fight with Usyk, via Michael Benson.

“I thought I was looking like Muhammad Ali in there… I didn’t get any impression I was losing. That’s why, when they announced [Usyk’s] name, I was kind of like: ‘Huh?’

Wow, talk about a fighter being lost. It sounds like Joshua had no clue what was happening inside the ring against Usyk, making his loss look even worse.

For Joshua to be so disengaged from the process tells you he cannot make adjustments. If you don’t know what’s going on in a fight, as Joshua reveals, how can you make adjustments when things are falling apart?

“You need to have good defence,” Joshua continued, “but I moved away from the ferocious side of boxing where I knew I could hit and stun people.

“And I do miss the days of slicing people’s faces open and hurting them, for sure, so I am looking forward to getting back to that,” said Joshua.

Joshua is failing to point out that the fighters that he was “slicing” up and “hurting” was essentially a mediocre bunch that any decent top ten heavyweights would ruin from this era.

Even a defensive-minded Joshua would be “slicing” up his past foes:

“He’s in camp now, and he sees what we’re about. I always felt that Americans didn’t respect UK heavyweights for years. So, I always wanted to change that narrative and bring the glamor division to the UK.

“As much as you believe he’ll come back, let’s respect his decision as well,” Joshua said about Fury’s decision to retire. 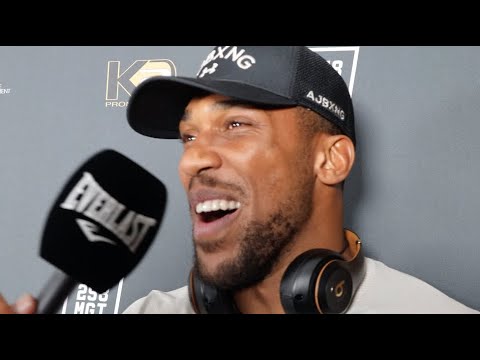