After Haney vs. Kambosos Jr. II, Then What? 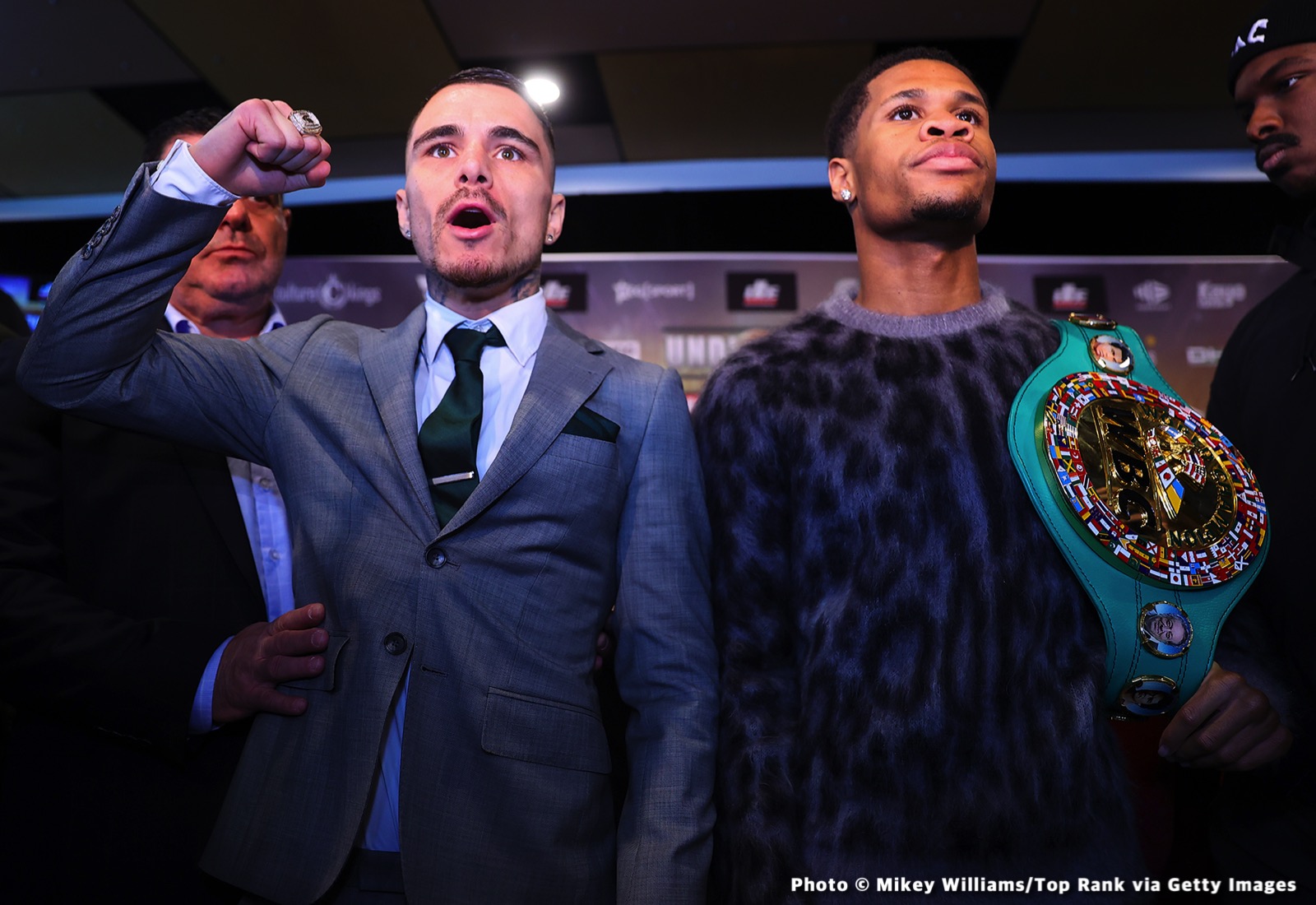 By Rory Hickey: After years of debate as to whether Devin Haney (28-0, 15 KO) deserved his WBC lightweight championship or if he was just an email champion, Haney ended all discussion. Haney went into Australia, the home country of George Kambosos Jr., and dominated Kambosos Jr. to earn an undeniable unanimous decision victory and take home the undisputed lightweight championship.

Even Kambosos Jr. (20-1, 10 KO) knew he was beaten by Haney, saying, “His timing was just a little bit sharper than my timing… I gotta go back to the drawing board with my team.” Kambosos Jr. does have a contractual rematch clause which he says he has exercised. So he will have one more chance to prove he has some answers for Haney.

The lightweight division is one of the eight original weight classes in boxing. The division’s longest title reign of the modern era (roughly the last century) belongs to Roberto Duran; he made twelve successful defenses of his lightweight title. There is currently a lot of intrigue in the 135-pound weight class with new champion Devin Haney and challengers such as Vasyl Lomachenko, Kambosos Jr., Gervonta Davis, and Ryan Garcia, among others. One of boxing’s historically premier divisions is teeming with talent.

The new lightweight king Devin Haney is one of the top young fighters in boxing. He was born in San Francisco, and though he is just twenty-three years old, he has already become the undisputed lightweight champion. When he turned professional at seventeen, Haney did not meet the US federal age requirement of eighteen and had to travel to Mexico for his first four pro bouts. Haney won those four bouts plus his next twenty-four to accumulate his current 28-0 record, with fifteen of those 28 wins coming by knockout. His skill level and technique are advanced before considering his young age.

At twenty-three years old, Haney has all the lightweight titles and now holds all the cards- assuming the rematch with Kambosos Jr. goes on as planned, it is hard to see how it would go differently. Once Haney moves past Kambosos Jr., what could the future hold for Devin Haney?

Vasyl Lomachenko (16-2, 11 KO) is regarded by many as one of the top pound-for-pound boxers in the world. Lomachenko is from the southwestern part of Ukraine in the Budjak region and won two boxing gold medals for his country in 2012 and 2016. His father, affectionately nicknamed Papachenko, served as the coach of the Ukrainian national boxing team. After an outstanding amateur career, Lomachenko began his professional campaign fighting mostly at featherweight or super featherweight, where he quickly became a multi-time world champion. He recently moved up to the lightweight division and was performing well; until he faced Brooklyn-native Teofilmo López in a championship unification bout when Lomachenko lost his belts to López in October 2020. Following the loss against Lopez, Lomachenko underwent surgery on his right shoulder. It was the second surgery Lomachenko had on his right shoulder after tearing his labrum in 2018. A rematch between López and Lomachenko did not occur as financial demands, Lomachenko’s shoulder surgery, and disdain between the two camps made a rematch untenable.

At the end of February, when Russia invaded Ukraine, Lomachenko returned home and joined a defense battalion. He was engaged in preliminary discussions for a fight against George Kambosos Jr. for the undisputed lightweight crown. Though Lomachenko likely would have been granted a waiver to leave the country, he decided to stay in Ukraine with his country under siege. So Kambosos Jr. then began negotiations with Devin Haney, and the rest is history.

Following Teofilmo López’s win over Lomachenko in October 2020, he ended up taking a fight against the aforementioned Australian George Kambosos Jr. The Aussie was seen by most as a lesser opponent who would keep López in shape for a potentially more lucrative bout. Between the multiple date postponements, venue changes, coronavirus tests, and promotional switches, it seemed like this fight would never actually happen. But López and Kambosos finally squared off on November 27th, 2021, thirteen months after López became the undisputed lightweight champion. Kambosos took the opportunity and won an exciting bout inside Madison Square Garden to pull off the massive upset and become the undisputed lightweight champion of the world.

Following his unexpected loss to Kambosos Jr., López has opted to move up to the junior welterweight weight class and compete within its 140-pound weight limit. He will make his junior welterweight debut on August 13th against Pedro Campa. This move makes sense for López as he had increased difficulty making the 135-pound lightweight weight limit.

As for Kambosos Jr., he got outclassed in his first bout with Haney- once Haney solved his Plan A, Kambosos Jr. had no idea what to do with Haney’s jab, and he went down pretty quietly in front of a raucous Australian crowd. For things to go differently in the rematch, he will need to be in better shape. Kambosos Jr. needed three attempts to weigh in under the 135-pound limit before his showdown with Haney, narrowly avoiding losing his titles on the scales before losing them to Haney in the ring. While Kambosos Jr. may have reached his career ceiling, the confident, hard puncher has relished proving the doubters wrong throughout his career.

Any discussion of the lightweight division in boxing would not be thorough without addressing the proverbial tank in the room. Gervonta “Tank” Davis (27-0, 25 KO) maintained his undefeated record by successfully defending his lesser version of the WBA lightweight championship by knocking out Rolando Romero in the sixth round of their fight in mid-April. Davis is one of the most exciting fighters in boxing, as evidenced by Madonna of all people being in attendance at his last fight at the Barclays Center. He sells a lot of tickets. Outside of the ring, Davis has had various legal issues recently that limit his marketability and palatability to a certain extent. Hopefully, Davis can stay on the straight and narrow path so that his tremendous boxing ability is the only point of discussion.

Many have accused Davis of ducking top-level competition throughout his career. The validity of that opinion will now be put to the test, as Davis’s promotional contract with Mayweather Promotions expired following Davis’s bout with Romero. Davis has indicated he would like to take his career a fight at a time rather than being locked in with a single promoter, following the model Canelo Alvarez has used after his split with Golden Boy Promotions. Davis can take his career fight to fight and take on whoever he would like rather than be at the mercy of a promoter who wants to either protect a fighter to preserve their marketability or not deal with a rival promoter. Now we will see if that is what Davis wants to do. If he does want to take on the best, there are a lot of interesting lightweight fights available to Gervonta Davis.

In July, Ryan Garcia and Javier Fortuna will be facing off in a welterweight clash, and if Garcia wins, he has already said he would love to fight Davis in December. While Fortuna is a top-ten lightweight, on paper Ryan Garcia should be able to win without too much trouble. Of course, boxing matches take place in a boxing ring, not on paper.

Ryan Garcia (22-0, 18 KO) could be the most intriguing name in the lightweight division. While he does not have any championships, the Los Angeles native almost certainly holds the title of the most marketable fighter at 135 pounds- he has a large following on Instagram and currently features in a national Gatorade commercial with Trail Blazers guard Damian Lillard.

Garcia has shown the skills in the ring to put him in conversations not just in Twitter threads; but for title shots. For most of his pro career, Ryan Garcia’s trainer was Eddy Reynoso, who gained prominence for his work with Canelo Alvarez. In February, Garcia opted to switch trainers and begin working with Joe Goosen. Garcia explained why he made the switch by saying, “Eddy didn’t have the time to work 100%. He’s a very busy trainer, and I understand.” Garcia has taken time away from the sport to recover from hand surgery and focus on his mental health, but he looks ready for his matchup with Fortuna in July. Joe Goosen is a great trainer in his own right, and now only time will tell how Garcia’s career progresses.

Ryan Garcia is intriguing as a potential challenger for Devin Haney. The two fought each other multiple times in the amateur ranks and have maintained a mutual disdain in the years since. If Haney and Garcia end up facing off in the pro ranks, their boxing quality combined with their history could make for an exciting fight.

There are some other possible fights in the lightweight division that would be appetizing if they can get made. Lomachenko vs. Haney would be a high-speed chess match. Kambosos Jr. vs. Davis could be an exciting fight between two hard-throwing southpaws. Ryan Garcia has the network appeal to convince any top name to take him on and the talent to compete with them.

The lightweight division has always been a preeminent weight class in boxing and right now is no exception. Devin Haney is the undisputed champion at twenty-three years old and has the talent to hold the belts for a while. Vasyl Lomachenko is superbly skilled and as healthy as he’s been in years but is dealing with circumstances beyond his control. George Kambosos Jr. went from little-known to the king of the mountain, but after being knocked off his perch, will he be able to scale to the top of the lightweight division once again? Gervonta Davis is an exciting fighter with the punching power to compete with any of the lightweight division’s top fighters, but will he take those big fights and keep his focus on the fight game? Ryan Garcia has the complete package to become a boxing superstar: the look, the fanbase, and the talent; now comes the hard part, putting it all together.

Now that George Kambosos Jr. has triggered his rematch clause, we will see him face Devin Haney again. It probably isn’t needed, but it is the necessary catalyst to see the sparks fly in the lightweight division.