A superstar was born. WBO junior lightweight world champion Shakur Stevenson outboxed and outfoxed WBC champion Oscar Valdez via unanimous decision (118-109 2x and 117-110) Saturday evening in from of 10,102 fans at the MGM Grand Garden Arena. With the win, Stevenson earned the Ring Magazine title and status as the division’s top dog.

Stevenson (18-0, 9 KOs) established the southpaw jab in the early going, and Valdez (30-1, 23 KOs) could not get his offense going outside of pockets of success in the third round. In the sixth, Stevenson spun Valdez into the ropes and knocked him down with a right hand.

It was all Stevenson in the second half of the fight, who built an insurmountable lead on the cards. Valdez won the 12th round on all three judges’ cards, but it was too little, too late. Stevenson asserted his dominance and is now the 130-pound king.

“I want to collect all the belts at 130 and become undisputed. I deserve to be a superstar, so that’s what I gotta do.” 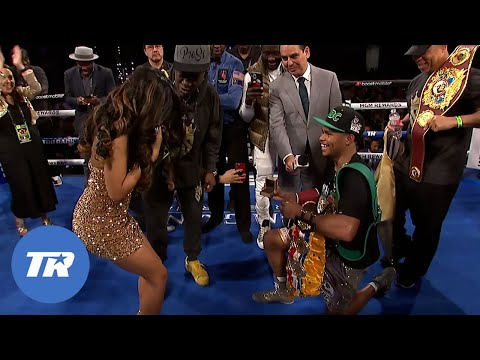 The future of the lightweight division, Olympic silver medalist Keyshawn Davis, battered Mexican veteran Esteban Sanchez (18-2, 8 KOs) en route to sixth-round TKO in the co-feature. Sanchez provided some resistance, but Davis (5-0, 4 KOs) wore down his foe round by round. He landed 56.8 percent of his power shots, including 34 of 53 in the sixth round.

“I just kept staying steady, staying with my rhythm. My coach, {Brian McIntyre}, kept telling me to go the body. I was trying to stab him a lot in the rounds, and honestly, I was just picking up round after round. I loved this fight because it challenged me. I felt challenged in the ring. I was happy I got a great performance and the stoppage.”

The youngster with the famous last name, middleweight prospect Nico Ali Walsh, ignited the MGM Grand with a brutal first-round knockout over Alejandro Ibarra (7-2, 2 KOs). Ali Walsh (5-0, 4 KOs), the grandson of The Greatest, ended matters with a sweeping right hand.

Ali Walsh said, “I was setting him up with the right hand. I noticed his left hand was going down when he threw the jab. I was trying to counter it, and that’s what I did. I wish the best for him and his team. He’s a true warrior. But I just waited for that setup, and I saw it and I took advantage.”

Junior Lightweight: Andres Cortes (17-0, 10 KOs) KO 6 Alexis del Bosque (18-6-1, 9 KOs). Cortes, a Las Vegas, native, put on a show for the hometown fans, knocking down Cortes twice in a brutal power punching display. A three-punch combination dropped del Bosque in the sixth. After rising to his feet gingerly, the fight was halted.

Middleweight: Troy Isley (5-0, 3 KOs) TKO 2 Anthony Hannah (3-3, 2 KOs). U.S. Olympian Isley savaged Hannah with body blows, putting his overmatched foe down for the count with a right hand to the gut. Earlier in the second, he knocked down Hannah with a left hook to the body.

Lightweight: Abdullah Mason (2-0, 2 KOs) TKO 1 Luciano Ramos (1-3), 2:32. The 18-year-old Mason, from Cleveland, Ohio, showed why he is one of the sport’s young prodigies with a first-round blitzing of Argentina’s Ramos. Referee Tony Weeks stopped the carnage after an assortment of lefts and rights left Ramos defenseless.