When the two fighters came together for the face-off on stage, the unbeaten Russian talent Bivol (19-0, 11 KOs) looked like he meant business, staring down at the shorter Canelo, making it clear that he’s not going to let him take his WBA 175-lb title.

Although the 31-year-old Canelo is a 4:1 favorite, many boxing fans believe Bivol will beat him soundly on Saturday night, and take the judges out of play.

For Bivol, beating Canelo would likely earn him a lucrative second fight against the Mexican star, giving him an even bigger payday the second time around.

Bivol has looked rusty in his last two fights against Umar Salamov and Craig Richards. The Russian fighter was out of the ring for 19 months after beating Lenin Castillo in October 2019.

In Bivol’s two fights since that long layoff, he’s struggled with his stamina. For Bivol to beat Canelo, he’s going to need to put in the kind of effort that we saw from him when he beat Joe Smith Jr in March 2019.

“I feel really happy to be here in Las Vegas once again, and I’m really excited,” said Canelo Alvarez during today’s grand arrival in Las Vegas for his fight this Saturday night against WBA light heavyweight champion Dmitry Bivol.

“Motivation but no pressure,” Canelo said when asked if there’s pressure for him fighting on the Cinco de Mayo holiday this Saturday, May 7th. “I like what I do. It’s motivation.

“The greatest fighter of this generation against an excellent undefeated world champion [Dmitry Bivol]. We’re going to have a great fight in Las Vegas, and a great party this weekend,” said Hearn. 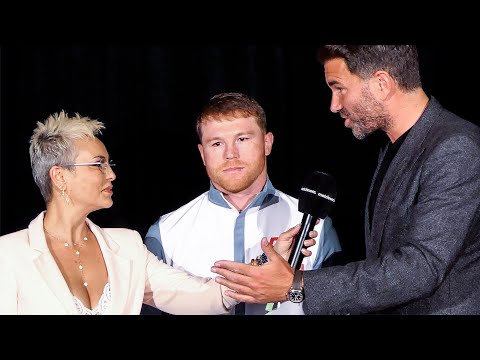