By Sam Volz: Dillian Whyte quickly responded to news of Joseph Parker being interested in fighting him next by telling him, “Let’s go” for a rematch.

The ‘Body Snatcher’ Whyte (28-3, 19 KOs) is game to fight the former WBO heavyweight champion Parker (30-2, 21 KOs) in a battle that would surely be on pay-per-view and bring in significant numbers.

Parker, 30, wants to avenge his loss of four years ago against Whyte in 2018 when he was roughed up and outfought by ‘The Body Snatcher.’ Whyte looked like he wanted it more in that fight, resulting in him edging Parker by a narrow 12-round unanimous decision.

Whyte lost to WBC champion Tyson Fury by a sixth-round knockout last month on April 23rd at Wembley Stadium, and he needs a big win to put him back in position to challenge for a world title.

The loss for Whyte dropped him from #1 to #7 in the World Boxing Council’s top ten rankings at heavyweight. Parker is ranked #2 WBO and #3 WBC.

Beating Parker would move Dillian into an excellent spot to get a quick title shot against the Anthony Joshua vs. Oleksander Usyk rematch winner.

“I just want the biggest fights at this stage in my career. Let’s go. I put hands on you once, and I will do it again,” said Dillian Whyte on social media, reacting to Joseph Parker expressing interest in a rematch.

Parker had been in the process of fighting Joe Joyce in July, but that match has been pushed to September.

Rather than sit around and wait, Parker wants to get back in the ring against Whyte in a meaningful fight that will put the winner in an enviable position to challenge the winner of the July 23rd Joshua-Usyk 2 rematch.

Parker’s manager David Higgins told Sky Sports today that Joseph wants the rematch with Whyte next, and they’re hoping they can make the fight happen.

“There’s no better time for a rematch between Joseph Parker and Dillian Whyte,” said manager David Higgins to Sky Sports.

“Joseph was showing me videos of the Dillian fight this very morning, and Joseph has wanted a rematch ever since,” Higgins continued.

Whyte dropped Parker twice in their 2019 contest, going down in rounds two and nine. In the twelfth, Parker finally showed some life, knocking Whyte down.

“It was a war. It was the heavyweight fight of the year.” 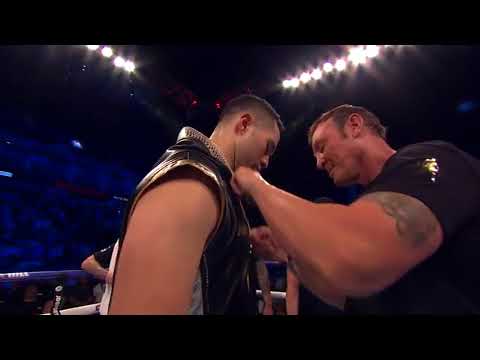