Bill says he’s been denied entrance into Australia because of a 1992 drug conviction that led to serving time. As a result, he won’t be working Haney’s corner for the important fight of his career against the Australian Kambosos Jr (20-0, 10 KOs) at the Marvel Stadium in Melbourne.

Haney isn’t going to let this stop him from defeating Kambosos in front of his own fans on the night. If anything, Devin will be even more motivated than ever to send Kambosos Jr. down to his first career defeat in the first of two fights.

Kambosos is coming off a huge upset win over four-belt 135-lb champion Teofimo Lopez last November in New York. That was a fight in which Teofimo had everything going against him. He was injured, weight drained and coming off a long layoff eleven months.

Poor Teofimo had everything you could imagine going against him that night, and yet he still came close to defeating Kambosos. If not for a careless moment in the first round, Teofimo likelyu would have won.

“I did some mistakes at 22, 23-years-old that Devin is now that hopefully, he’ll never have to make the mistakes,” said Bill Haney to Trill Boxing Talk.

“It states to the Australian government that any conviction that you serve a year or more is what stops you from getting into the country. I’ve only been in prison one time and served prison time for over a year in 1992.

“I have a felony on my record that goes back to 1992, a federal drug conviction that I served time on. I was open and honest about that. Top Rank and DiBella Entertainment knew about this as well, and we thought we would get the support that we needed from the Australian government pertaining to it.

23 years old, agreed to everything they wanted, to make the fight, travelled across the world, to their backyard, without his coaches, to fight for the Undisputed title. Champions mindset! @Realdevinhaney 👑👑👑👑👑 pic.twitter.com/85TXXiiw2c

“Hopefully, that’ll happen in the next couple of days or two or in the weeks before the fight that I’ll be able to go. I do want the world to know that as a dad, I’ve prepared Devin for this moment.

“We weren’t going to let anything get in the way of this moment of Devin showing up and showing out and doing what he does best.

“As a father, and that’s what I consider my job first and foremost in preparing him for the day that he’ll no longer have me. I no longer have my dad. I lost my dad around the same age as Devin.

“It was devastating for me to lose him physically and not be able to talk to him anymore,” said Bill. 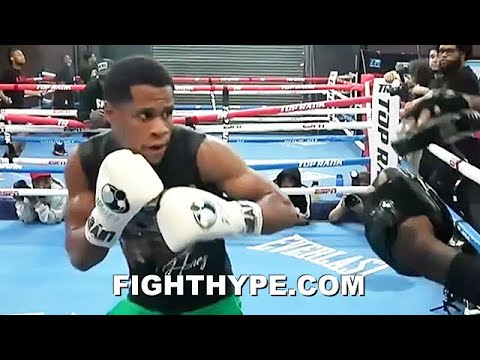