Haney’s meme showed an actor getting knocked out in a similar way that Rolly had been by Tank in the sixth round.

Tank caught Rolly with a left hand to the head that put him down, and he was deemed too hurt to be allowed to continue fighting by referee David Fields.

In fairness to Rolly, he was getting the better of Tank during the entire fight up until a big shot caught him in the sixth round. It’s not like Tank was dominating the 26-year-old Rolando last Saturday night.

For months, Rolly has been trashing Haney (27-0, 15 KOs) during interviews, calling him a “boring fighter” and saying he’s a weak champion. 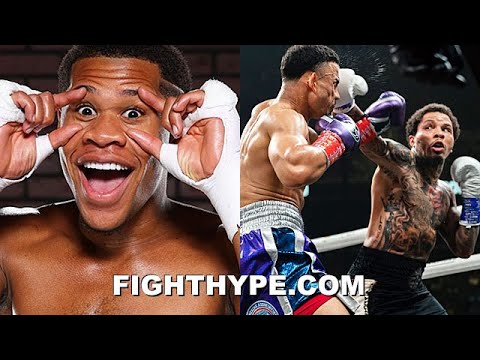 Finally, Haney got the opportunity to get the last laugh with Rolly suffering his first career defeat at the hands of Tank Davis (27-0 25 KOs) at the Barclays Center in Brooklyn, New York.

Of course, what comes around goes around. We could see Rolly gleefully enjoying himself at the sight of Haney losing next month if he gets beaten by unified lightweight champion George Kambosos Jr. in their undisputed 135-lb championship on June 4th at the Marvel Stadium in Melbourne, Australia.

“It was a great performance, a shutout, of course, by Rolly. He made a mistake and got a little froggy,” said Rolly’s trainer Bullett Cromwell to Fight Hub TV after Rolando’s sixth-round knockout loss to Tank Davis.

“He showed the world that he could outbox the champion,” Bullett continued. “He outboxed him, but Tank is a champion for a reason. I told him he has timing and experience.

“Timing & experience are two dangerous weapons, and all the other weapons, Rolly has them. So it was like four elements to two elements.

“He [Rolly] got caught with a shot, a clean shot, a shot that I teach to some of my southpaw fighters,” said Bullet about the left-hand KO punch that Gervonta stopped him with in the sixth.

“I tried to explain to Rolly, ‘Control the distance, don’t follow him.’ If you hear me coaching, you’ll see what I’m saying.

It’s just kind of disappointing to walk away from an opportunity of a lifetime for one of the most underrated fighters in the history of boxing. Floyd Mayweather Jr, Leonard Ellerbe, and Showtime gave us a chance. It’s not over.

“I’m very proud of Rolly. Congratulations to Tank. They were quiet, very quiet,” said Bullett about the crowd at the Barclays Center not making noise during the first five rounds during the time that Rolly was in control of the fight.

“When you’re in somebody else’s home, and there are no cheers during the fight, it just proves itself,” said Bullett.