De La Hoya has concerns about whether Al Haymon will get in the way of making the Ryan vs. Pitbull Cruz fight.

While De La Hoya is confident that Cruz’s promoters at Manny Pacquiao Promotions want to do the fight with Ryan (22-0, 18 KOs), he isn’t sure about Haymon.

It’s a difficult fight for the 23-year-old Ryan, and it could mess things up for WBA ‘regular’ lightweight champion Gervonta ‘Tank’ Davis. There’s a lot of money to be made in the Tank vs. Garcia fight later this year.

If Ryan didn’t look so shaky in his last two fights against Emmanuel Tagoe and Luke Campbell, Pitbull Cruz (23-2-1, 16 KOs) wouldn’t be a problem to take the fight with him.

Feeding Ryan to a dangerous puncher like Pitbull Cruz is a really bad idea because this guy is too advanced for the level that the popular social media icon has been fighting at.

It might be too risky to let Ryan take this fight, given his last two performances and the huge money at stake in a battle with Tank Davis that he’d be risking.

“The WBC ordered Ryan vs. Pitbull, so now we get to work,” said Oscar De La Hoya to Fighthype. “Hopefully, this can push to becoming a reality. Look, our side still wants it.

“I’m sure Pitbull wants it, but it’s their side. I don’t believe it’s Pacquiao’s side, who I believe is the promoter for Pitbull. I don’t think it’s Sean Gibbons. The problem here is Al Haymon.

“We want it; there’s no doubt about it. We want it 100%. If the fight is ordered by the WBC, it should be easier to make. Yeah, if it’s going to become a purse bid, let’s go. Let’s make it happen.

“There’s nobody that can hide now. If we take it to a purse bid, nobody can hide. Let’s make the fight happen. It’s a great fight. Styles make fights; it’s an exciting fight,” said De La Hoya about the Ryan Garcia vs. Isaac Cruz fight.

“I like Pitbull; I really do. I like his character, and I like the way he fights. He’s a humble kid who is working hard and living the American dream.

“Obviously, Ryan Garcia, he’s my guy. I’m with him 100%. Look, Ryan is getting better; he’s getting confident and went through what he went through, which is a blessing because now he’s focused and determined to get to the top.

“I think this fight with Pitbull, he wins. If Ryan has the right game plan, he beats him hands down,” said De La Hoya. 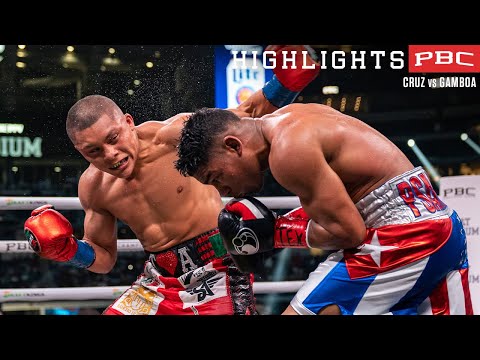