By Allan Fox: Five years after his first fight against Canelo Alvarez in 2017, Gennadiy Golovkin will be attempting to pick up his first win over the Mexican star when they meet live on DAZN PPV on September 17th for their trilogy match.

It will be tough for Golovkin to defeat Canelo  (57-2-2, 39 KOs) without changing his fighting style. If Golovkin can’t change the same approach to his offense that he’s used in his first two fights with Alvarez, he will lose the trilogy match. 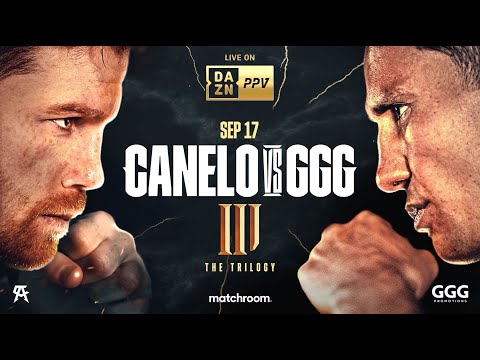 Golovkin has tended to load up on every shot in the past, throwing single punches instead of combinations. That didn’t work well for him in his two fights with Canelo, and he failed to adapt by switching to combination punching.

However, Dmitry Bivol showed that the way to defeat Canelo is by NOT loading up and instead concentrating on throwing combinations that overwhelm his ability to counter punch.

Alvarez, 31, threw fans for a loop by choosing to fight Golovkin next instead of facing Bivol to attempt to avenge the one-sided 12-round decision he suffered on May 7th.

While some fans are pleased that Canelo has chosen to fight Gennadiy again, more than a few see this as a weak ducking move by the Mexican star to avoid a near-certain second loss to Bivol.

Why did Canelo choose Golovkin?

Many boxers naturally do the easy thing, choosing not to take risks with their careers and step out of their comfort zones, especially after a bad experience like the one Canelo just dealt with in being embarrassed by the undefeated WBA 175-lb champion Bivol (20-0, 11 KOs).

For that reason, it’s not surprising that Canelo has chosen the safer fight against Golovkin.

You can argue that if Canelo didn’t have his back against the wall with pressure from fans to fight Bivol or David Benavidez next, he wouldn’t have picked Golovkin.

Canelo Alvarez says he’s pushing ahead with the trilogy fight vs. GGG rather than a rematch with Dmitry Bivol. Sources tell ESPN Canelo had 30 days to decide his Sept. 17 opponent. He will now defend the undisputed super middleweight championship:

Many fans doubt whether Golovkin has a shot at winning other than by knocking out Canelo, given the scoring by the judges in their first two fights in 2017 & 2018.

Golovkin’s advanced age and recent lackluster performance against Ryota Murata suggest that Canelo should win without controversy this time, perhaps even by knockout.

The former four-division star Canelo, 31, revealed last Monday that he’d be fighting the 40-year-old Golovkin next in September, and many boxing fans are pleased that he’s finally choosing to face GGG again.

It’s been four years since Canelo defeated Golovkin (42-1-1, 37 KOs) by a questionable 12-round majority decision in September 2018, and many people believe that the Mexican star was afraid of fighting him again.

We’re all aware of the car wreck of the first Canelo-Golovkin fight in September 2017, which shockingly scored a 12-round draw despite Golovkin dominating the contest. That was the fight in which one judge, Adalaide Byrd, scored it 10-2 for Canelo.

“We already had that contract [with GGG], that agreement, so we have to continue what we started, and I think those are the two biggest fights in boxing, the fight with Golovkin and the rematch with Bivol,” Canelo said to ESPN.

“Unfortunately, we lost, but that doesn’t mean I’m not going to try again,” Alvarez said about his defeat against Bivol.