By Sam Volz: Joshua Buatsi (16-0, 13 KOs) was forced to go the distance for one of the rare times in his five-year professional career in defeating Craig ‘Spider’ Richards (17-3-1, 10 KOs) by a 12 round unanimous decision on Saturday night to make him the mandatory for WBA light heavyweight champion Dmitry Bivol.

Fighting in front of an amped-up crowd at the O2 Arena in London, the 2016 Olympian Buatsi took the fight to Richards from the opening bell, forcing him to work harder than he was comfortable with.

Promoter Eddie Hearn said after the fight that he’d like to bring Bivol to the UK to have him defend against Buatsi next if he doesn’t fight Canelo Alvarez in a rematch.

“Craig has proved a lot before, particularly in the Dmitry Bivol fight,” said Hearn after the contest. “It was an incredible fight, respect for both.

“As I said in the build-up to this fight, both guys are waiting for a world title fight. Why not put it on the line for a big domestic fight. That was a big risk for Joshua Buatsi tonight, and he came through in a tremendous fight,” Hearn continued.

“Craig is so tough, great engine, great chin, but Joshua Buatsi is there. There’s nowhere else to go. There’s nothing in the middle anymore between this and a world title.

“I think Vergil and 258 will sit down, and I know Joshua wants to fight for a world title. I’d love to even see a second fight between those two, but I know this young man has his eye on a world championship,” Hearn said about Buatsi. “I think it’s time after a fight like that.”

“We’ve said we want a world title next,” said Buatsi. “Maximum respect to Spider. I can’t give him enough credit, but we’ve made it very clear. Eddie knows what it is. Everybody knows what it is, man.

“My team and I are there; we’re ready, man,” said Buatsi.

“Yeah, Canelo has the option to fight Bivol next or fight GGG and then Bivol,” said Hearn. “If he fights GGG, Bivol is looking for a big fight. I’d love to bring Bivol against Joshua Buatsi at the O2. That’s an incredible fight.

“Whatever he’s got to do, he’s ready to challenge. It’s been six years nearly since Rio [Olympics], since he turned professional, and he’s had a great development. That was an incredible fight tonight, but I don’t think there are any more steps.

“If Dmitry Bivol is available and ready to go at the end of the year, I think that’s the fight for Joshua Buatsi,” said Hearn.

“I did; I thought I’d done enough,” said Craig Richards after the fight when asked if he felt he deserved the decision. “I thought I finished strong, but credit to Joshua, he’s a hell of a fighter. He got the nod today, so congratulations to Joshua.

“I’m not saying I thought he was going to be easy work, but when you’re there, you believe in yourself,” said Buatsi. “He gave me 12 hard rounds. Maximum respect to him.

“Josh was a good dance partner. Me and Joshua have known each other for a long time, and we’ve headlined the O2 Arena,” said Richards. “Respect to my brother.

“It was a hell of a fight, and I hope the fans enjoyed it. Today, the fans are the winners. We put on a hell of a show, and for sure, we’ll be back. This is #1 and #2 in Britain, getting it on the line. He got the crown today. So credit to him; he’s a hell of a fighter and proved himself today. I’ll be back,” said Richards. 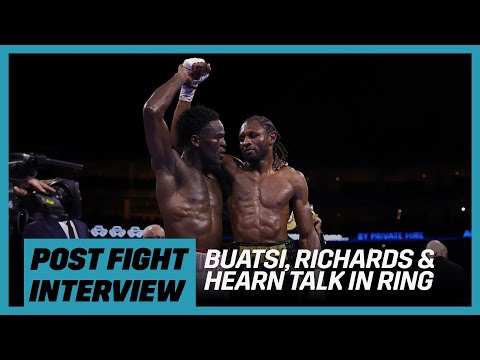