By Chris Williams: Devin Haney’s father Bill has now been “formally denied” a visa for him to enter Australia as the coach for his son’s June 4th undisputed lightweight championship fight against George Kambosos Jr. in Melbourne.

Yoel Judah will be the trainer in Devin’s corner for the fight against the unbeaten Kambosos (20-0, 10 KOs) in their headliner on June 4th at the Marvel Stadium in Melbourne, Australia.

Kambosos’ 15-minutes of fame could be about up with him facing the young phenom Haney.

The Australian Kambosos was one of those lucky sorts that was in the right place at the right time when he got the opportunity to fight the injured, ring rusty, weight drained Teofimo Lopez last November.

As far as the unbeaten WBC 135-lb champion Haney is concerned, he’s good to go, and he’ll be ready for war against Kambosos with or without his father Bill.

He’s not the one that will be on the front lines in the trenches on June 4th, so nothing changes. If Kambosos or his team were hoping to get an edge from Bill not being in the 23-year-old Haney’s corner on the night, they’ll be out of luck.

A thirty-year-old drug conviction from 1992 is believed to be the reason for the Australian government denying Bill’s visa to enter their country.

“I’m happy that I came early because it gave me time to become fully acclimated and I feel great,” said Devin Haney to Gareth A Davies about him coming to Australia early for his June 4th fight against George Kambosos Jr. in Melbourne.

Bill Haney, father/trainer of @RealDevinHaney, was formally denied a visa to enter Australia on Friday, sources told @SInow. Haney will be cornered for his fight with George Kambosos by Yoel Judah.

“The downtown part reminds me of San Francisco. Yoel has been training me since I was a little kid, so he knows me really well,” said Haney when asked how it affects him not having his dad, Bill with him in Australia to prepare for Kambosos.

“It’s different without my dad, of course, but we must still go in there and finish the job. My dad can’t fight for me, and I know that. I’ve got to go in there and perform.

“It won’t be no different. I’ll be the same outcome on June 4th as it would be with my dad or without my dad. We’re going to go in there, and we’re ready for battle.  By any means necessary and we’re going to get the win.

“I can’t really say right now because we haven’t crossed that road with him physically not being there all the way. He installed in me what I need to do and the game plan, we will keep replaying it.

Yoel has been joining a great job. He stepped in and we’ve been doing a great job of sparring & everything. The chemistry has picked up where we left off, so we’re ready to go,” said Haney. 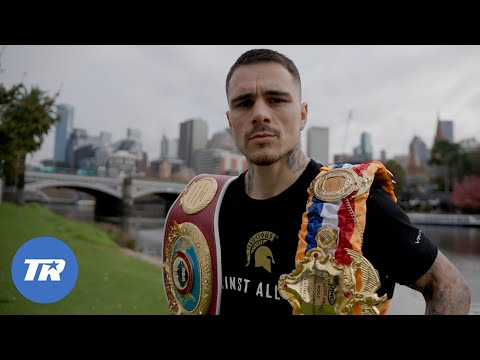 Champions in the Ring Not Necessary Out of the Ring! »