By Jim Calfa: IBF/WBC light heavyweight champion Artur Beterbiev and WBO champion Joe Smith Jr. meet on June 18th in a three-belt 175-lb unification clash in a fight that will put the winner one step away from becoming undisputed.

The fight between the hard-hitting knockout artist Beterbiev (17-0, 17 KOs) and Smith (28-2, 22 KOs) was already revealed a month ago, but it wasn’t made official until today.

Now, we’ve got to hope that neither fighter suffers injuries during training camp that might result in the match being postponed.

Beterbiev vs. Smith Jr. will be headlining on ESPN and ESPN+ at Madison Square Garden in New York. The winner of this Saturday’s fight between Canelo Alvarez and WBA light heavyweight champion Dmitry Bivol is expected to battle the Beterbiev-Smith Jr. in 2023 or 2024.

If Beterbiev scorches Smith in a brilliant fashion, he might have to wait a while to get a chance to fight Canelo if he comes out victorious on Saturday.

Beterbiev, 37, is looking really lethal right now, and he’d be a problem for Canelo due to his power, inside game, and his fast face pace style of fighting.

“I am coming to Madison Square Garden to add another world title to my collection,” Beterbiev said. “This fight will get me one step closer to becoming undisputed champion.”

Hopefully, the boxing world doesn’t need to wait too long to see the undisputed 175-lb championship.

With Canelo expected to fight Jermall Charlo and David Benavidez in 2023, the Beterbiev-Smith winner may need to wait until 2024 before they face the Mexican star unless he chooses to fight in December.

“Beterbiev versus Smith is one of the very best fights that can be made in boxing, two huge punchers fighting at Madison Square Garden in what will be an electric atmosphere,” said promoter Bob Arum. “Whoever comes out on top will be the true king of the light heavyweight division.

In the co-feature bout, two-time Olympic gold medalist Robeisy Ramirez (9-1, 5 KOs) will take on Abraham Nova (21-0, 15 KOs) in a dangerous fight for the talented Cuban. Top Rank is moving the 28-year-old Robeisy quickly, as well they should, given his extensive amateur career.

Robeisy vs. Nova could steal the show from the main event fight between Beterbiev and Smith. The talented Cuban Robeisy is fun to watch, and he’s world champion written all over him.

It’s too bad Robeisy isn’t fighting at 130 because it would be interesting to see a rematch between him and Shakur Stevenson. Unfortunately, the way Shakur is growing, he’s going to be soon fighting at 135, and he’ll likely be fighting at 147 within a few years.

Since losing his pro debut by a four-round split decision to Adan Gonzalez in August 2019, Robeisy has won his last nine fights and looked sensational.

“Robeisy Ramirez has developed into a sensational pro, and he will have his hands full against a tough, undefeated kid in Abraham Nova. The winner will be in line to fight for a featherweight world title,” said Arum. 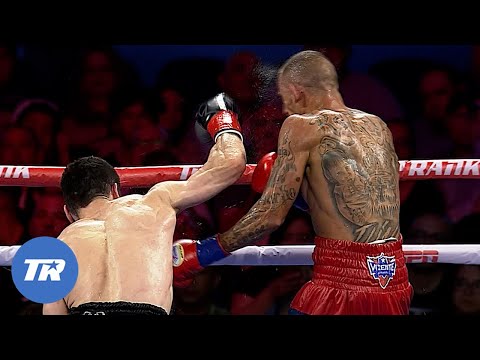 Canelo Alvarez out of his comfort zone against Dmitry Bivol »