Charlo (32-0, 22 KOs) isn’t saying why the fight with the unbeaten Benavidez (25-0, 22 KOs) can’t happen this year, given that he has an easy voluntary defense against Maciej Sulecki he’ll be taking on June 18th.

Perhaps one reason why Jermall isn’t in a hurry to fight Benavidez this year is because he’s still hoping to get a fight against Canelo Alvarez.

That’s a match-up that Jermall mentioned quite frequently on Friday, and it’s one that see him likely get a career-high payday.

“I feel like my brother is going to do great,” said Jermall Charlo to Fight Hub TV about his brother Jermell Charlo’s fight against Brian Castano on Saturday.

“I’m going to keep getting dodged. I don’t need to fight Canelo to be one of the greatest fighters in history,” Jermall continued. “If he doesn’t fight me, it’s all good. S*** happens sometimes,” said Jermall.

I’m not sure if the 31-year-old Charlo was joking when he said he’s going to be one of the “greatest fighters in history” because his resume is to terribly poor for him to be remembered after he retires.

If anything, Jermall will be remembered for having an inflated resume filled with middle-of-the-road opposition.

“I just feel like Bivol was a lot bigger,” said Charlo when asked if he was disappointed at seeing Canelo Alvarez lose to Dmitry Bivol last Saturday. “I could have used my jab a lot faster and a smarter fighter than Bivol. He beat Canelo in a landslide.

“We offered him a lot of money, and we got close to it, but, look, maybe the fight will happen in the future if y’all don’t blow it for me, s***,” said Jermall about a fight between him and Canelo.

“Y’all blowing it for me with all these damn interviews & questions. Let him [Canelo] pick me. It’s time for him to come over. Like I said, I got the best management group in the world. Al Haymon has never let me down, so I realize it’ll happen sooner or later,” said Charlo about him and Canelo fighting.

“It’s getting real close. It’s going to happen in 2023. I want it,” said Jermall about him and David Benavidez. “Next year, we should get it on. We’ll figure it out when we get there,” said Charlo when asked how he’ll beat Benavidez.

“We’ll beat his a** too. I tried to keep it cool with Terence Crawford, but his career ain’t doing s***. Obviously, he has to try and make a name for himself. Stay away from the Charlo boys; stay away from Spence. They are from Texas.

“Let him cheerlead all he wants; that’s what cheerleaders do. They cheerlead,” said Charlo in reacting to Crawford calling Jermell Charlo a cheerleader.

“He’s a cheerleader; that’s why he’s cheerleading. He puts on a facade. He’s a 140-pounder. He’s probably like this tall. He’s [Crawford] not on our level. We’re surpassed that s***. We don’t got to call nobody out no more. They’re going to call us out.

“F*** David Benavidez. He can’t beat me at s***. Nothing. Don’t worry about it. I want the fight to happen. I talked to Al. We’re going to make the fight [Benavidez] happen, and if not, we’re going to keep fighting who we’re fighting.

“I got the best management in the group, trust me. My handlers are doing great with me career.

“Did you write these questions down?” said Jermall when asked about his June 18th against the struggling contender Maciej Sulecki. “Sulecki is a tough a** fighter. I’m going to whoop his a**.

“I know but watch me do some s***,” said Jermall when told that the 32-year-old Sulecki has never been stopped despite having lost two out of his last four fights. 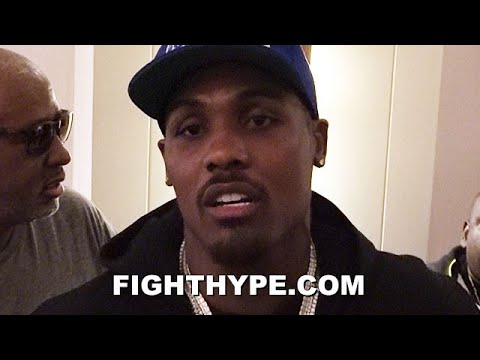 
« Was Canelo daring to be great, or was he simply deluded?