By Charles Brun: Tyson Fury has confirmed that he’s retiring after successfully defending his WBC heavyweight title against Dillian Whyte on Saturday night at the Wembley Stadium, in London.

In the sixth, Fury caught Whyte with a right uppercut that knocked him flat on his back.

The badly hurt 34-year-old Dillian then climbed up off the canvas, staggered around, but was in no shape to continue. The fight was then halted at 2:59 of the sixth by referee Mark Lyson.

When Whyte would get in punching range, Fury would expertly wrap him in a clinch to keep him from getting his shots off. Everything else was rinse & repeat for the remainder of the fight.

It was boring to watch, and definitely not comparable in any way to Anthony Joshua or Oleksandr Usyk’s recent fight last September. Speaking about those guys, Fury made it clear afterward that he has zero interest in staying around to fight the Joshua vs. Usyk II winner.

After the fight, Fury (32-0-1, 23 KOs) let the media know he was retiring and plans on doing boxing exhibition matches like Floyd Mayweather Jr. to make easy money. Fury also said he wants to do WWE. Obviously, these are things that have a short shelf life.

Fury can make easy coin selling his exhibition matches at first, but it’s not something that he can long period before the crowds get sparse, especially if he puts on more weight.

As it is, Fury’s flabby physique resembled a dad’s body tonight and looked considerably slower than the relatively svelte 247-lb version of himself that defeated past his prime Wladimir Klitschko in 2015.

“I’m going out at the top,” said Fury after the fight. “I want to thank everyone that made it happen in my career. You might see me at Summerslam. Big shoutout to Vince McMahon and all the boys. You’re going to see me in exhibitions, WWE, movies.

“100 percent, Francis Ngannou is on that list,” said Fury.

Tyson will be able to make good money fighting Ngannou, but it’s still disappointing that he’s reduced to fighting a non-boxer rather than staying on to fight the winner of the Joshua vs. Usyk rematch.

Fury was bragging afterward like he’d had a great career, but the reality, he’s fought mostly beatable guys. Dillian Whyte looked like a bigger version of journeyman Derek Chisora tonight, and you can understand why the 40-year-old Alexander Povetkin knocked him out in 2020.

Fury choosing to retire without fighting Joshua or Usyk is going to be seen by fans as a ducking move on his part because those guys are much better than anyone Tyson has beaten. Joshua knocked out Wladimir in 2017.

Usyk would have dominated Whyte if he were in the ring tonight. You can argue that Usyk would have made it a lot more entertaining if he’d fought Dillian than Fury, who looked slow, flabby, and average. 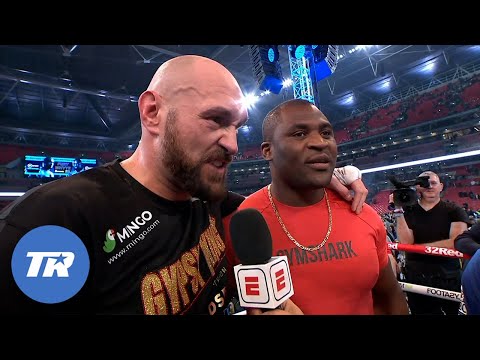