By Sean Jones: Nonito Donaire says Canelo Alvarez must get inside the long reach of WBA light heavyweight champion Dmitry Bivol to attack him to the body on May 7th if he’s to have any chance of winning.

Donaire notes that Canelo (57-1-2, 39 KOs) has always had problems during his career fighting quality guys that used their jab to keep him at a distance, and Bivol is the best of the bunch at that style.

It will be next to impossible for Canelo to work his way to the inside against Bivol because he won’t make the same bumbling mistakes that weak champions like Billy Joe Saunders, Caleb Plant & Callum Smith made against him by backing against the ropes.

The 6’0″ Bivol is more disciplined at sticking to a game plan than the weak bunch of paper champions that Canelo hand-picked in 2021 to capture titles at 168, and it’s going to be a massive shock to his system to be thrown in with a talented fighter suddenly.

Canelo and Bivol are fighting next week on May 7th on DAZN PPV at T-Mobile Arena in Las Vegas. This is the same venue where Canelo fought Gennadiy Golovkin in 2017 & 2018, and some fans believe the Mexican star is unbeatable when fighting there.

“Bivol can use the jab, which will be a little more difficult for Canelo. Canelo’s head movement is phenomenal; he’s one of the best out there when it comes to that,” said Nonito Donaire to Fighthype.

“If Bivol can jab and use his reach and use that stiff arm to get Canelo out, it’s going to be a hell of a fight for Canelo. But if Canelo can get in there [on the inside against Bivol], it’s going to be an early night,” Donaire said.

“That’s exactly what we need to find out,” said Nonito when asked if Canelo will be able to take the jab away from the 6’0″ Bivol, who has a two-inch reach advantage in this fight.

“If Canelo can get in there because Bivol is tall. Bivol can throw that jab from a faraway distance.  We saw how Canelo was having problems with Kovalev with the jab.

“With Bivol using the jab, it’s going to be a hell of a fight if Canelo can’t get past that jab because he’ll set up the straights and the uppercuts all day,” said Donaire.

If Canelo can’t get past Bivol’s jab, he doesn’t stand a chance of winning the fight other than by a controversial decision.

“We know that European, Russian-ish, that area from Kazakhstan to Ukraine, they have this long-range,” said Donaire.  “They love to throw the straight [power shot], the uppercut, but they love this jab.

“They’re like this all the time [extending their lead hand far in front of them]. In the amateur days, this is how they fought. It’s going to be an interesting fight for me.

“If Canelo can do that [get inside against Bivol], that body shot is going to tear him apart,” said Donaire. 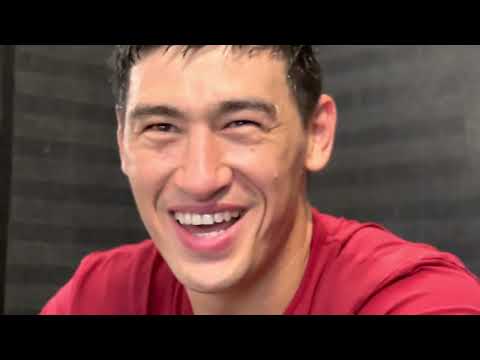