Fury’s style is made for Whyte says David Haye

By Allan Fox: David Haye believes the new aggressive fighting style that Tyson Fury has learned from his trainer Sugarhill Steward could ultimately work against him in defense of his WBC heavyweight title against Dillian Whyte on April 23rd.

Haye feels that the aggressive manner that Fury (31-0-1, 22 KOs) is now using, involving many exchanges, will put him in harm’s way of Whyte’s powerful left hook.

According to Haye, Fury would be more effective against Whyte if he went back to the style he employed in his win over IBF/WBA/WBO heavyweight champion Wladimir Klitschko in 2015.

Fury used movement, jabbing, and quick shots to keep Wladimir from landing his power shots in that fight.

The only problem that would prevent Fury from returning to his mobility style of fighting is all the weight that he’s packed on his 6’9″ frame in the last two years.

When Fury fought Wladimir, he was a younger fighter in his mid-20s and weighed 247 lbs.  Fury is now 33 and weighed 277 lbs last October for his trilogy fight against Deontay Wilder.

Even if Fury wanted to, he likely wouldn’t be able to return to the 247lbs that he weighed for his fight against Klitschko seven years ago without draining himself.

As such, Fury might be better off staying at the weight he’s been fighting at lately and hoping he can avoid getting caught by Whyte’s left hook.

“His counter left hook is going to be imperative in this fight,” said David Haye to Secondsout about Dillian Whyte. “Tyson Fury throws certain punches all the time, and if you can catch and throw after certain ones, you can unsettle his rhythm.

“If I had a pound, I’d put it on Dillian Whyte for the upset,” Haye told Boxing Social. “Yeah, I’m going with Dillian with the massive, massive upset. We had an upset with Anthony Joshua [losing to Usyk last September].

“I feel the fighter that Tyson Fury has become over his last two fights where he’s had his most success against Deontay Wilder. I strangely feel that style works perfectly well for Dillian Whyte,” said Haye.

David could very well be right about Fury’s new style working “perfectly” for Whyte because he’s morphed into a simple brawler who is getting hit more now than he ever did before.

The fighting style that Fury used for his last two contests against Deontay Wilder worked well against him, but only because he had no inside game, stamina, chin, and was too was badly outweighed.

In contrast, Whyte can fight on the inside, has excellent cardio, and will be weighing close to 250 lbs. He’s not going to be outweighed by 42 lbs the way Wilder was in his rematch with Fury.

“What I feel wouldn’t work as well is the Tyson Fury that fought Wladimir Klitschko, who was happy staying on the outside, just touch & move and steal the rounds,” said Haye about a style that Whyte would struggle with. “That would be more awkward for Dillian Whyte to overcome.

“The coaches in the corner can only do so much,” said Haye when asked how Fury & Whyte’s trainers will impact the outcome.

“I definitely liked Sugar [Steward] in his last fight against Deontay Wilder. He really got to grips with him. He reminded me of Emanuel Steward with the way he used to lecture Wladimir.

“He was literally screaming at him, telling him what to do. You could see that the respect was there. He understood what needed to be done and went out there and implemented it,” said Haye.

As long as Sugarhill has a good backup plan for Fury to use if his original game plan isn’t working against Dillian, he should win. 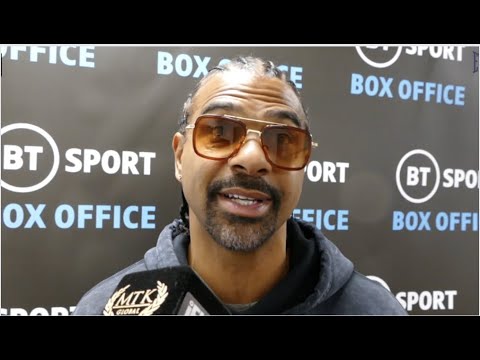