By Scott Gilfoid: Dean Whyte says he was taken by surprise by Tyson Fury’s dad John Fury suddenly “went mad” and “raving” during today’s final press conference, seemingly wanting to tangle for no apparent reason.   Dean says, “John wanted to fight, I don’t know what was going on.”

Dean says he didn’t know what set the 57-year-old John Fury off, but he was coming forward, ‘Tensing up” and he was trying to calm him down.

Hopefully, John doesn’t get triggered during Friday’s weigh-in for something. That would be a bad one if he erupts on stage for this or that.

Luckily, Tyson was able to calm his dad before things got out of hand on the stage because that would have ruined today’s press conference. Afterward, Dean seemed confused about what set John off to get him in that state.

Something John saw in Dean triggered him to the point where he snapped the way he did.  Dean looked pretty shaken during the interview afterward, still unsure what he’d done to cause John to react the way he did.

“Holy s***, John wanted to fight me. I don’t know what’s going on,” said Dean Whyte to iFL TV about John Fury blowing a gasket during the press conference while they were on stage.

“Yeah, he went mad, he was just raving. I don’t know, and I don’t know,” said a surprised Dean in reacting to the bizarre behavior by the 57-year-old John Fury.

“I said, ‘Tyson, talk to this guy.’ Dad, chill out, what are you doing?’ I said, ‘We had a great press conference, why tensing up and raring?’ I’m not being funny. I have respect for the other young man. Not that young, but younger than him.

“So, I said, ‘Behave yourself. I’m not going to get into it.’ I want no aggressive. He [John] is the man’s dad. I’m not interested in that conversation. That’s not for me, I respect that.

“I have a son. I wouldn’t want someone that is arguing with my son to come and fight me. That’s just mental,” said Dean. 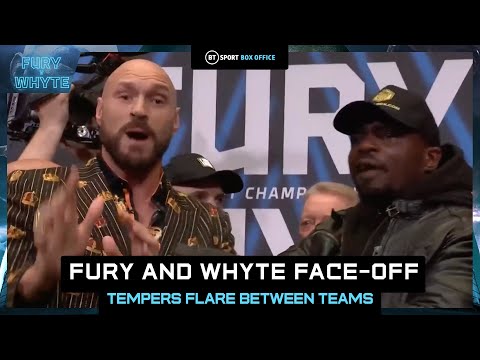