By Charles Brun: Chris Van Heerden believes he’s better skilled than the “angry fighter” Conor Benn and sees himself having his hand raised in victory this Saturday, April 16th, at the Manchester Arena in Manchester, England. Benn vs. Van Heerden event will be televised live on DAZN this Saturday at 2:00 p.m. ET.

Some boxing fans feel that Benn has a chip on his shoulder because he’s the son of the famous Nigel Benn, a great fighter in his day, an exceptional talent from the get-go during his career.  For his part, Conor lacks the speed, power, size, and skill of Nigel.

If Conor were as good as his famous dad Nigel, he obviously wouldn’t be facing weak opposition like Van Heerden, Chris Algieri, and Adrian Granados. Nigel was a machine during his career, and you couldn’t hold him back the way Conor is being held back.

The 34-year-old South African-born Van Heerden (28-2-1, 12 KOs) says he’s been picked out by Benn’s promoters to use as a “stepping stone” to make him look good, but he feels it’s going to be his “coming out party” on the night.

Boxing fans are less than pleased with the news of Benn facing Van Heerden, and they’ve not been pacified by promoter Eddie Hearn’s comment about the South African having fought Jaron ‘Boots’ Ennis in his last fight.

That fight was two years ago when Boots Ennis was 22-years-old, and Van Heerden was 32. It wouldn’t be an issue if Van Heerden were the same age as when he fought Ennis and if he were still active.

Unfortunately, Van Heerden hasn’t fought since the Ennis fight, which puts him at a disadvantage.

Benn is about to turn 26, and there seems to be little interest on his promoter’s part in putting him in against killers like David Avanesyan, Ennis, and Vergil Ortiz Jr.

It would be nice if Matchroom would break their pattern of setting Benn up with gimmes and throw him in the deep end with a few killers to see if he’s got some of his father’s talent.

Thus far, I haven’t seen any of Benn’s dad in him in terms of power, size, speed, and tenacity. I hate to belabor a point, but if Benn were as good as his dad, his promoters wouldn’t need to match him against Van Heerden or Algieri, right?

“Benn has not walked the road I walked. I didn’t have the last name to carry me in my boxing career. I had to do it the hard way,” said Chris Van Heerden to Matchroom Boxing.

“Unfortunately, it comes with a price. His dad [Nigel Benn] is a very, very famous fighter, and I feel like the Benn last name put him in a position where he didn’t need to work that hard for.

“I’m a much better boxer than Conor Benn,” said Van Heerden. “Conor is, in my opinion, is an emotional, angry fighter. He relies on his power. He cannot box with me. He’s not a boxer. He’s a power puncher.

“I don’t rate him as a boxer. That’s why I’m saying he’s very emotional, angry type of fighter, in my opinion,” Van Heerden said about Benn. “Through the history of boxing, we know that fighters hate fighting southpaws.

“Orthodox fighters always have a lot of trouble fighting southpaws. It’s not the easiest, and that’s definitely going to play a factor, in my opinion.

“They see me as a stepping stone for Conor,” Van Heerden said. “I see it as a coming-out party for me. I see this is where I shine, and people say, ‘Wow, where has this kid been? I just never got a fair shot,'” said Van Heerden.

You can argue that virtually all of Benn’s career has seen him matched against fighters to make him look like a killer, and if that’s the case, it worked.

Benn now has a huge fan base in the UK, and many of them believe him capturing his first world title is just around the corner.

“I believe if it all comes together on the night, I can compete with anyone in the 147-lb division,” said Van Heerden. “I just got to stay focused on doing me. I’ve got to cut the crowd out. I don’t think it’s going to be a tough one. It’s going to be a very hostile crowd in Manchester, and I’m looking forward to it.

“The key for me is, and all of that is, to stay focused and remind myself and talk to myself that when I’m in that ring, I’m only fighting Conor. There’s only one man in front of me.

“I got to remember that, and the key is for me to stay calm, stay focused, and that’s how I’m going to beat him,” said Van Heerden. “This is why I started boxing for opportunities like this. I’ve always wanted to fight in the UK. I’ve got this opportunity.

“I’ve never fought in front of a crowd this big. This is going to motivate me. Now I’m finally getting my shot. I lived for this moment, and I’ve envisioned this moment,” said Van Heerden. 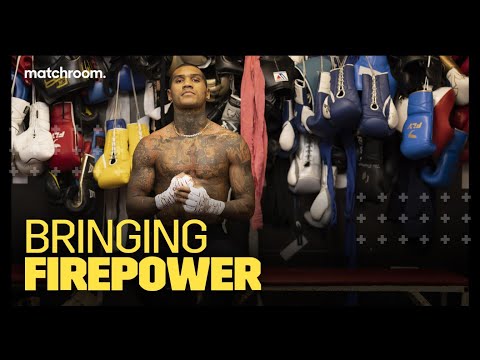 Stanionis, Butaev, Benn: An important Saturday for the future of the Welterweight Division »