By Jim Calfa: Canelo Alvarez wants Oscar Valdez to focus on being smart & winning his fight with his skills against WBO super featherweight champion Shakur Stevenson, not on trying to entertain the fans on April 30th.

Canelo feels that WBC 130-lb champion Valdez (30-0, 23 KOs) puts too much emphasis on entertaining the fans by going to war with his opponents instead of using his boxing ability to make it easier for him.

Against the defensive artist Shakur Stevenson (17-0, 9 KOs), Valdez will need to be wise because this is a fighter that takes advantage of his opponent’s aggression to counter them.

Stevenson had recently proven that he could easily best a fighter with more power than Valdez when he defeated Jeremiah Nakathila by a one-sided 12-round unanimous decision last June.

Shakur has been sparring recently with WBO welterweight champion Terence Crawford to help get him ready for Valdez. It’s unclear how much the sparring with Crawford will help Shakur for this fight with Valdez, however, because his style is entirely different.

If Stevenson were fighting a switch-hitting counter puncher, sparring Crawford would be helpful, but not in this case.

“It’s going to be a very difficult fight for both fighters, but Oscar [Valdez] has a lot of experience, has a really good training camp, so it’s going to be a really good fight,” said Canelo Alvarez during a zoom call on Wednesday when asked about his thoughts on the April 30th 130-lb unification fight between champions Oscar Valdez and Shakur Stevenson.

Champ came and gave me that work – 9 rounds of him pushing me, April 30th it’s gone be a show 💯 pic.twitter.com/AxeCVuDEdc

“I’m surprised about that [Oscar Valdez being underestimated] because Oscar can do a lot of things in the ring,” said Canelo. “He always tries, ‘I’m going to put a show for the people, go forward and try to in & out, and take a punch and throw punches,'” said Canelo.

The fans are underestimating Valdez because of how bad he looked in his last fight against Robson Conceicao last September. Valdez, 30, arguably lost that fight, and that was against a guy that is nowhere near as good as Stevenson.

“I said, ‘Oscar, this fight is going to be different. You need to keep focused and win the fight, not to put on a show for the people because he’s a really good skilled fighter that moves around,'” said Canelo about what he told Oscar Valdez about Shakur Stevenson.

“‘So if you go forward, he’s going to do his fight. You’re going to fight his fight. So you need to be very careful and do your fight to win the fight,'” said Canelo.

It probably won’t help Valdez to receive advice from Canelo because the talent gap between him and Stevenson is too big for him to gain anything from the pearls of wisdom the Mexican star is bestowing on him. 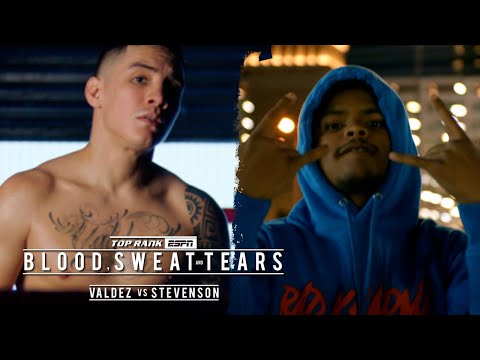