Cruz took care of the 40-year-old shell of Gamboa, knocking him down three times en route to scoring a fifth-round TKO. The flabby-looking Gamboa was dropped in rounds two, three & four. Despite being visibly overweight, Gamboa moved well around the ring and showed many skills.

One got the sense from watching Gamboa that he would have quickly taken care of Pitbull if he were in his prime. The form that Gamboa once had during his best years in the sport was there, but the speed & punch resistance was wholly gone from the once talented Cuban.

Pitbull Cruz tagged him with a hard one-two combination that sent him falling into the ropes in the fifth. The referee then stepped in and halted the fight to prevent Pitbull from lowering the coup de grace on the hurt out of, shape Gamboa. The time of the stoppage was 1:32 of the fifth.

This was the worst Gamboa has looked in his career, as he was hurt in EVERY round of the fight. Cruz nailed Gamboa with a left hook to the head in the first round, causing his legs to wobble. Pitbull had his way with the former Cuban amateur star from that point on.

From looking at the 40-year-old Gamboa, it was hard to believe that he captured an Olympic gold medal for Cuban in 2004 and that he was viewed as the #1 featherweight in the division in 2007.

Gamboa was a star, a mini-Mike Tyson with a rare combination of power and hand speed in his prime.

Unfortunately, like many fighters, Gamboa stuck around too long in the sport, and his career was never the same after he moved up to the lightweight division in 2013.

Ryan’s promoter Oscar De La Hoya, posted an offer of $1 million to Pitbull Cruz for him to accept the fight. Whether Oscar is serious about the $1M offer remains to be seen.

However, Ryan’s message also showed a degree of ambivalence with his comment about him NOT needing the fight with Pitbull. Historically, when fighters make that comment, they’re not eager to take the fight.

In Ryan’s case, you can understand why he wouldn’t want to fight Pitbull Cruz because he looked something awful in his last return bout last week against Emmanuel Tagoe on April 9th in San Antonio, Texas.

Ryan looked wild with his punches, unskilled and timid, seemingly afraid to stay in the pocket against a fighter with very little punching power.

“I want this fight. Oscar De La Hoya come on and negotiate with us. Let’s make this fight happen, but not on social media. Let’s negotiate and let’s fight,” said Pitbull Cruz at the post-fight news conference when asked if he’s willing to face Ryan Garcia next.

“I don’t know what to say, Isaac Cruz, other than I’m ready now we have a big fight at hand, I guess all Bark no bite?” said Ryan Garcia on Twitter following Pitbull’s destruction of Gamboa last Saturday night.

“I absolutely understand he wants to continue his momentum and build his career, but if he thinks I need him, he’s delusional, or his team, I’ve made great money,” said King Ry.

It would be good for De La Hoya to think it over before making this fight with Pitbull Cruz because he’s a bad style match-up for Ryan, who looked like a skinny Blue Heron wetlands bird in his battle against Tagoe.  Cruz would have a field day with Ryan’s fighting style with the way he stands straight up without bending his knees. 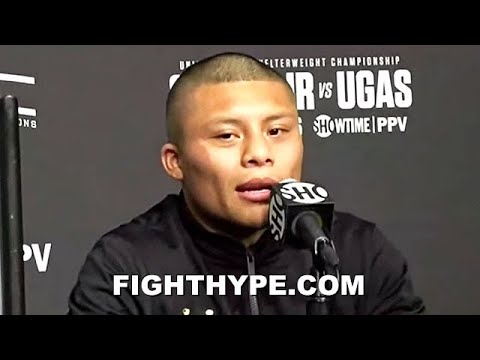