#1 WBO Ortiz (18-0, 18 KOs) is taking a step down in competition in facing the unbeaten little-known British fighter McKinson 21-0, 2 KOs) in the headliner.

In the co-feature, 32-year-old welterweight prospect Blair Cobbs fights Alexis Rocha. Cobbs is a big talker, but he’s never fought anyone of note during his career.  Moreover, Cobbs’ age is advanced for a prospect-level fighter.

Although the World Boxing Organization has given McKinson a top-five ranking, he’s never beaten anyone remotely resembling a contender during his eight-year professional career.

Unfortunately, this fight is another example of the sanctioning bodies ranking a fighter that is ill-prepared for what he’s up against. The 27-year-old McKinson could be classified as a ‘runner,’ as he’s a pure defensive fighter with no punching power and a lowly KO rate of 9.52%.

It would be interesting to know why DAZN chose to give the green light to the Ortiz vs. McKinson fight for the main event.

This is more of an undercard level fight at best, and it’s disappointing given the direction Ortiz had been going in his two previous fights against Egidijus Kavaliauskas and Maurice Hooker.

McKinson’s last six opponents show his qualifications or lack thereof to be fighting a quality operator like the 23-year-old Ortiz Jr:

“I can envision an Errol Spence vs. Vergil Ortiz in Dallas at Jerry’s world in a mega-event,” said Oscar De La Hoya. “The plans are right on track.

“He’s third in the WBO, undefeated obviously. It’s going to be a good fight,” said Vergil Ortiz to ESNEWS about his opponent Michael McKinson.

“If it’s sold out, I’m even more happy,” Vergil said about the Galen Center for his fight with McKinson. “I’m going to do what I do best.

“That’s way down the line. That’s more speculation at this point because we’re two weight classes apart. I’m closer to moving up to 154 than I am going down to 140,” Ortiz said in responding to De La Hoya saying he’s going to fight Ryan Garcia in the future.

“I’ve been saying that for years already,” Ortiz said about his interest in challenging IBF/WBC welterweight champion Spence. “Everyone asks me who do I want to fight next. I’ll fight anyone with a belt. It’s not that I want them. I want the belt,” said Vergil Jr. 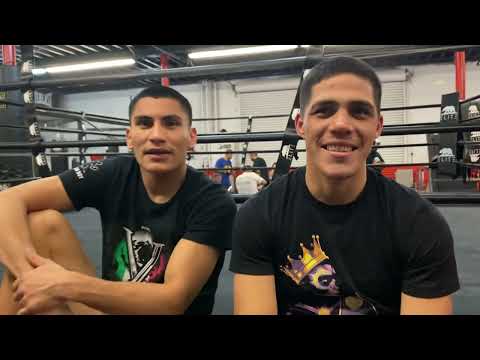