By Jack Tiernan: A whooping 85,000 tickets were sold on Wednesday for the April 23rd fight between Tyson Fury and Dillian Whyte at Wembley Stadium in London.

Promoter Frank Warren reportedly will be looking to increase the capacity of Wembley Stadium to 100,000 to give fans more tickets so they can see this excellent fight live.

The 100K would break the British boxing attendance record, and it would be fantastic for a fight that Fury is singlehandedly promoting.

WBC mandatory Whyte surprisingly didn’t show up at the kickoff press conference on Tuesday to promote the fight, leaving Fury out on stage by himself to do the heavy lifting himself in marketing the event.

Fortunately for Queensbury Promotions and Top Rank, Fury was more than capable of taking up the slack for Whyte not being there to do his job as he should have.

Tyson sees no improvement over Whyte from the fighter knocked out in the seventh round by Anthony Joshua in 2015. Dillian is the same fighter, but older now at 34, and chinny.

Whyte’s best wins since his loss to Joshua have come against these fighters:

“I don’t think he’s improved at all since he got knocked out by AJ, and how long ago was that?” said Tyson Fury to Boxing UK about Whyte not having improved since 2015.

“Yeah, I saw him get knocked the spark out by a 45-year-old at the end of his career,” said Fury when asked if he didn’t see improvement in Whyte in his recent fight against Alexander Povetkin.

“Dillian’s a bum, and he deserves to be in the bum section. I did enjoy it, and I don’t need an opponent because I’m more than capable of handling it all on my own, as we saw today,” said Fury when asked if he enjoyed the kickoff press conference.

“There will be NO British officials, none,” said Fury on none of the judges for his fight with Whyte will be from the UK.

“I don’t think it’s going to happen,” Fury said of the Anthony Joshua vs. Oleksandr Usyk rematch. “With the way things are going, I don’t see that fight happening in April or May, no way,” Fury said.

If war between Russia and Ukraine drags on much longer, we won’t see the rematch between Anthony Joshua and Oleksandr Usyk.

Eddie Hearn needs to be looking for a replacement option for Joshua to fight in May or June when he returns to the ring.

Perhaps if Hearn leans on the IBF, WBA, or WBO, they’ll take one of those titles from Usyk and make it available for Joshua to fight for in May or June.

Fury believes that Whyte is at the same level as Dereck Chisora talent-wise and doesn’t bring much to the table for this fight.

This means that what Fury did to Chisora in their two one-sided fights, we’re likely to see a repeat on April 23rd.

It would have been better if Whyte had to earn his fight with Fury by beating some of the good heavyweights in the division, but he made the shot by defeating Oscar Rivas.

“I’ll get more than $32 million for this fight guaranteed,” said Fury on his purse for his fight with Dillian.

“I’m the ultimate fighter and have proven it many, many times, and these guys turn up for a paycheck. I’m going to knock this b***ch out,” Fury said in giving his prediction on his match against Whyte.

“If he can make it in time, I’ll spar Jared [Anderson], but if not, I’ll spar whoever. The thing with Dillian Whyte is, he’s not a slick American who is going to dodge a million shots that you need a specific guy for.

“I can spar the local binman for Dillian Whyte because he’s an average heavyweight with average skills,” said Fury when asked if he needs a specific sparring partner to get ready for Whyte.

“So, there’s nothing that he doesn’t that’s really special. He’s just a basic heavyweight, really. Dillian Whyte knows what I’m going to do to him on fight night. Tune in and find out.

“No, there’s no rematch clauses in this one. I don’t need one. I’m confident of knocking him out; I don’t need a rematch. No, I’m 34; it’s the final fight of my career.

“I’m retiring after this, $150 million in the bank. I’m going to buy a massive yacht abroad. I’ve got loads of supercars all over the world. Good looking, healthy, young.

“I’m retiring, I told you. I’m out; this is my final fight. This is my final countdown; I’m done. Wilder is a dosser. Dillian is a slink, so it’s a new one. He’s a big slink,” Fury said.

Fury has sparred with Whyte in the past, and he knows full well that this isn’t the type of guy that he can afford to take lightly.

To be sure, Whyte is one of the best fighters in the division, and he’s someone that Fury knows he can’t take for granted.

Whyte’s wins over Joseph Parker, Dereck Chisora, Robert Helenius, Mariusz Wach, Oscar Rivas, and Alexander Povetkin show that he’s not someone that Fury can look past.

“We’re paying him $8 million, and there’s an upside of $4 [million] if he wins the fight,” said Frank Warren to Fight Stars TV about Dillian Whyte.

“He should be highly delighted that he’s fighting on a Queensbury show in association with Top Rank.

“It would be really funny if fighters didn’t show up at press conferences, his shows, and our shows. It would be marvelous,” said Warren in reacting to being told that Matchroom Boxing promoter Eddie Hearn said that it would be funny if Dillian Whyte doesn’t turn up and doesn’t take involvement in the promotion.

Fury definitely won’t overlook Dillian for this fight because that’s not the type of fighter he has.

With Whyte coming off a big crushing 4th round knockout win over Alexander Povetkin last March in their rematch, Fury will be at his best physically & mentally to ensure the same thing doesn’t happen to him on the night.

“Who are you going to interview?” Warren continued. “How is it going to work? How are we going to sell shows? Not everybody is Tyson Fury.”

It’s incredibly immature on Whyte’s part of him not to show up for the kickoff press conference to promote his fight with Fury.

Suppose Whyte chooses to sit out all of the press conferences for the Fury fight. In that case, it could potentially damage his career, as other top fighters and their promoters might be reluctant to face him, fearing that he won’t help promote the fight for whatever reason.

“It’s a stupid, idiotic remark by somebody that is hanging on by his fingertips at the moment,” said Warren.

“He keeps getting beaten in purse bids, doesn’t get behind his fighters, and that’s what it is. Who cares? We move on, and we got a shot that we’ll sell a lot of tickets for.

“He’s got to get through this fight first. I know Tyson; he won’t overlook it; it’s a tough fight.

“We know the other guy is going to come to fight when he gets in the ring,” Warren said of Whyte. “He’s getting a huge purse. He won’t overlook it, Tyson. He doesn’t overlook anybody,” said Warren.

Dillian will fight as hard as possible because he’s got to know that if he loses, this might be the end for him as far as big fights.

Whyte will have no problems getting fights against gatekeeper heavyweights like Parker, Chisora, Frank Sanchez, and Luis Ortiz, but the famous guys will likely avoid him because they won’t want to take the chance of him choosing not to help promote. 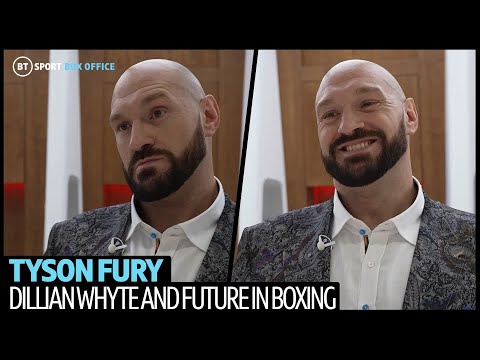 Will Canelo vs. Bivol Be Canceled? »