What Ryan doesn’t like about this fight is how unmotivated Gervonta is about facing Rolly. He calls Rolly a “clown,” and says his promoters at Mayweather Promotions wanted him to take this fight while he was still with them.

The respect the wariness that Davis needs to have to go into this contest against the 5’8″ Rolly isn’t there, and it should be considering that he’s the biggest puncher of his career by a long shot.

Gervonta might be overlooking Rolly due to his strange fighting style, which makes him look uncoordinated and unskilled at times. You can throw into the bargain the tough time Rolly had in his fight against Jackson Marinez in 2020, a contest that some feel that he deserved to lose.

“I think he’s severely underestimated because the thing with Rolly is he may look funky, but he knows his funky moves really good, and his range,” said Ryan Garcia to Fighthype when asked if Rolly Romero has a shot of defeating Gervonta Davis on May 28th.

“He doesn’t like to put himself in danger,” Ryan said of Rolly with his odd fighting style. “It’s just a weird way of doing it, but he does it the way you’re supposed to do it.

“I don’t know how to explain it, but just know that he does have some good pop in his shots, and he could knockout Tank if Tank isn’t careful. But then again, Tank is small,” said Ryan.

Rolly could stop Tank even if he is careful. That’s the kind of power that the 26-year-old Rolly possesses. The former WBA interim lightweight champion Rolly cuts off the ring well, and he applies constant pressure on his opposition.

Rolly is like a smaller version of Gennadiy Golovkin with the way he exerts nonstop pressure on his opponents, and he hammers them into submission with his powerful shots to the head and body.

Tank is coming off a career-worst performance against Isaac ‘Pitbull’ Cruz last December and looked beatable in that fight in winning a close 12 round decision.

“There are a lot of attributes that might be against Tank in this fight, to be honest, but Tank is a special fighter and maybe he can find something special to do and he can pull greatness out of him,” Ryan said.

“We’ll see, but it doesn’t seem like he wants to fight him too much. That’s the strange thing about it. ‘Ah, man,’ but he should just buckle down and say, ‘F*** it, I’m fighting him. Let’s go,” said Ryan in analyzing the Tank Davis vs. Rolly Romero fight.

It’s a bad sign that Gervonta isn’t excited about taking on Rolly because that’s not the way he needs to be going up against a dangerous puncher like him.

It would be excusable for Tank to be disengaged mentally if he were facing one of his past opponents like Yuriorkis Gamboa or Hugo Ruiz, but NOT Rolly Romero.

This is a fighter that Tank needs to be 100% dialed in mentally for him to win, particularly after his lackluster performance against Pitbull Cruz on December 5th.

“It has that feel to it,” said King Ry on his April 9th fight against 5’8″ Emmanuel Tagoe. “I’m pretty good at fighting shorter guys. That’s kind of my expertise, I’m used to it.

“He’s a little shorter, and he likes to box. A lot of people try to pressure me, so we’ll see. Maybe it does end up like that,” Ryan continued about Tagoe.

“I don’t know too much about this guy. He’s kind of a funky fighter if you watch him, he kind of does a lot of funny stuff. But I‘ll stay calm and surgically break him down and knock him out.”

Tagoe is a dangerous fight for Ryan Garcia because he has a good engine, and he hits hard enough to stop the young Golden Boy star if he can connect on his chin the way that Luke Campbell did.

“I have pretty good timing, and I think that’s something that has separated myself from other fighters, my timing, and my accuracy,” said Ryan.

“So, you can probably see that in this fight, but if he brings something out of me, then you’ll see my eyes light up. It’s just like Luke Campbell.

“He brought something out of me and I had to dig deep and get to him, take it to him. Usually, I like boxing on the outside.

“Obviously, I’m taller and counter you, but Luke Campbell made me take it to him, and I did it,” Ryan said. 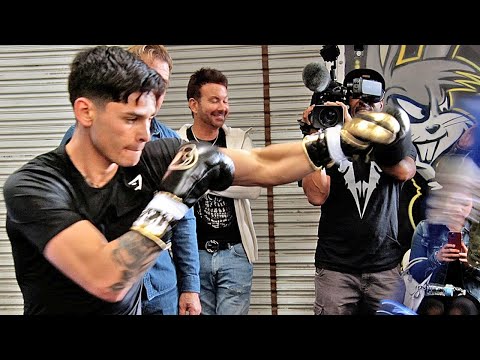 
« Mayweather asks Canelo to give Benavidez his shot