By Jeff Aronow: Josh Warrington (31-1-1, 8 KOs) reclaimed his old IBF featherweight title by stopping champion Kiko Martinez (43-11-3, 30 KOs) in the seventh round with a blistering performance at the First Direct Stadium in Leeds, England.

The victory for Warrington came at a cost with him suffering a broken jaw.

Throwing punches in a machine-gun fashion, Warrington dropped Kiko in the first, and cut his face in several places.

By the seventh round, Martinez was bleeding everywhere and had no defense for the final flurry from Warrington, which necessitated referee Marcus McDonnell to step in to save the Spaniard.

Martinez was still on his feet but he likely would have gone down in the round if not for the referee’s decision to wave it off.

After the fight, Warrington said he’d like to fight either in the City Grounds against WBA champion Leigh Wood or travel to the U.S for a unification there.

If Warrington fights in the U.S, the obvious choice would be WBA ‘Super’ champion Leo Santa Cruz. Other options would be newly crowned WBC belt-holder Mark Magsayo or WBO champion Emmanuel Navarrete.

Unification next for Warrington

“Amazing, the atmosphere, the first round, the second round, and the toughness of Kiko Martinez, coming back into the fight a little bit,” said Matchroom Boxing promoter Eddie Hearn.

“There was always a moment in every round of that fight, even beyond the first round, where you thought, ‘Kiko is still in this fight.’ He was throwing big shots, but Josh Warrington fought the perfect fight.

“He broke him down. Obviously, he dropped him in the first, but he kept breaking him down. He stayed smart, and had the third round off. The pace was unbelievable, and eventually, he just bombarded him with a 50 or 60-punch combination that stopped the fight.

“It was a good stoppage from the referee. No complaints from Kiko and Josh Warrington makes history, a two-time world champion in front of 12,000 incredible Leeds fans,” said Hearn.

Confirmed from the hospital @J_Warrington clean break of his jaw prior to stopping Kiko Martinez to win the World title tonight @DAZNBoxing pic.twitter.com/Oc3xI83tzZ

“He deserves it because we feel we had unfinished business as well. We came back to Matchroom and we looked to make the big fights. The pandemic came, and he lost the Can Xu fight,” Hearn said about Warrington.

“He had to vacate the [IBF126-lb] belt to chase bigger fights. He had a run-out fight against Mauricio Lara, who turns out to be the most dangerous featherweight in the world.

“He came back and chose to rematch him. That fight ended on cuts, and then came back into this fight with really his career on the line tonight to win tonight.

“He knew all the things that he dreamed of when he came back to us, the American fights, the unification fights, were there again if he could win tonight. He put a lot of pressure on himself, but he produced the goods at time when the pressure was on.

“We’re very proud of him and there’s another chapter to write yet. Yeah, he’s been saying that for a long time,” said Hearn about Warrington wanting an ‘away fight’ for his next match-up.

“There’s a mandatory with the IBF as well, and there’s the politics to deal with in the governing bodies. For a long time, he’s wanted an away day.

“We did a little away day a few years ago in Germany in an eight-rounder with Josh. There were about 600 people that came. There will be over 6000, 10,000, there could be more going on a trip to Las Vegas.

“That’s something he really wants for his career. If we can nail a big unification fight out there, that’s something we’ll look at as well,” said Hearn.

Josh ready for an away fight

“When the fight was announced, it was a given, beating him five years ago. I think I’m a lot better than I was five years ago,” said Josh Warrington to Matchroom Boxing after the fight.

“But then as it gets closer and closer, you start to have doubts. You start thinking, ‘In my last two fights, I’ve not performed well,'” Warrington continued.

“One of them [against Mauricio Lara] only went two rounds, but the fight before that [Warrington was stopped by Lara].

“I’m 31 now and I start asking questions of myself. The sparring was good, the camp was good. It was almost too good. Yeah, I’m ecstatic.

“I wanted to be champion again. I don’t want to talk too much about my emotions and my family stuff. My kids, when I was leaving to the hotel, my kids said, ‘Good luck, Daddy.’ As soon as I heard that, he could I get beat? I’m not getting beat with me.

“My kids told me to do the business and fight on my own terms. I said, ‘I’m not going to get beat,’ especially walking out to that. You’ve seen it yourself. All you guys at Matchroom and all you guys with DAZN and Eddie’s face. It’s special.

“We don’t do the same numbers as Wembley, but they’re special. They made the noise of 100,000 people. I won’t get beat in front of them. I’m not getting beat in Leeds.

“The stars aligned. Listen, the respect I have for him is out of this world,” said Warrington about Kiko Martinez, who is expected to retire now following his loss tonight. “The guy is an absolute warrior. I’m called a Leeds warrior. He’s a Spanish warrior.

“He’s unbelievable and he punches very hard. His 18-year-career is some going. I’ve been going 13 years now, 11 years, I don’t know how long I’ve been going. I feel like I’m pension in this sport.

“Yeah, it’s ongoing. Full credit to him. I need to learn some Spanish so I can have a pint with him after.

“Listen, we’ve done our stadiums, we’ve done on the road, and done in this arena 11 times. There’s not a picture of me either. So, we need to sort that out. But listen, we get told that we can only fight in Leeds.

“Let’s have a little away day. I’d love to go to the States. We’ve been saying that for a long time, but if I have to go over to the City Ground [Nottingham] and take over there, then so be it.

“Kudos to Leigh Wood for being the man that he was and let me have my moment,” said Warrington. 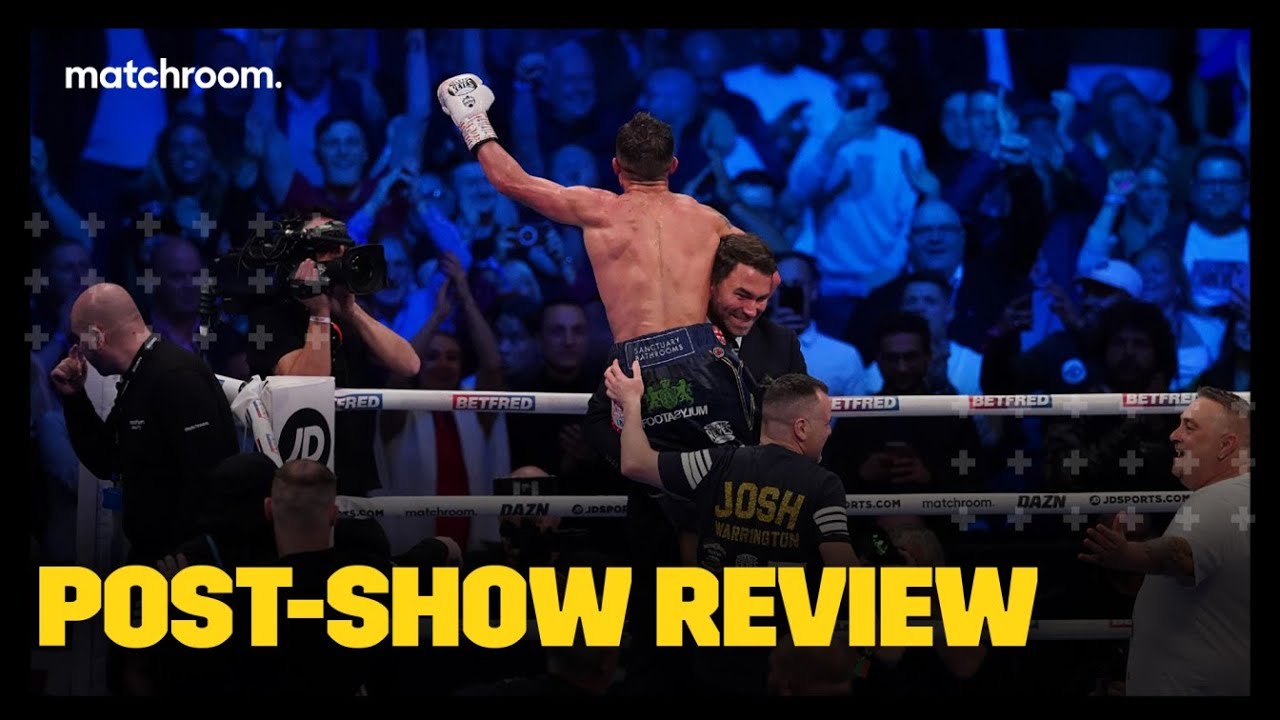