The southpaw Prograis (27-1, 23 KOs) knocked the 32-year-old McKenna (22-3-1, 6 KOs) down in the second round and controlled the fight with his boxing. In the fifth, McKenna suffered a bad cut over his right eye.

A round later, the referee Bence Kovacs stopped the fight due to McKenna’s cut worsening. There was blood everywhere, making it an easy choice on the referee’s part to halt the contest. The time of the stoppage was 1:40 of the sixth.

After the contest, Prograis got a lot of British boxing fans’ hopes up by saying that he’d like to face Jack Catterall.

However, in the dressing room, Prograis made it clear that his next match will be against Jose Zepeda (35-2, 27 KOs) for the soon-to-be-vacated WBC light-welterweight title.

Prograis said that if he captures the WBC title, he’ll defend it against Catterall (26-1, 13 KOs) in his first defense, feeling that he deserves a title shot due to his controversial 12 round split decision defeat against undisputed champion Josh Taylor on February 26th.

“I felt great. A big up for Tyrone; he was tougher than I thought,” said Regis Prograis to iFL TV. “Looking at him and how frail his body looked, ‘I’m going to blast him out in one round, two round.’ Man, he was tough.

NEWS:   Regis Prograis wants no excuses from Jose Zepeda after beating him

“That was probably the best outcome because he was all cut up and stuff, and he just kept coming. So he was definitely tough competition.

“But he brought the war, that’s what he promised, but once I started boxing, that’s all I had to do. I didn’t have to go to war with him. When I was face-to-face, I told him, ‘Look, I’m going to hurt you.’

“What’s what I do. I go, and I hurt people, and I know I have power. I know he never felt nothing like that.

“With eight ounces on, most people can’t take my power, especially now that I’m starting to box, people aren’t going to take that. I just need to box when I box, and people can’t touch me. I feel like I’m the best at 140 when I have to box, though,” said Prograis.

You can argue that Prograis might not have had such an easy time had he fought one of the top five contenders in the 140-lb division instead of choosing to face McKenna, who is ranked #17 WBC.

This is an opponent that Prograis picked, and fortunately for him, the World Boxing Council sanctioned the fight despite McKenna not being ranked in the top 15.

It would have been far tougher had Prograis needed to beat one of these fighters in the WBC title eliminator:

“I got drawn into one fight, which you’re referring to against Josh Taylor, and it didn’t go the way I wanted to go,” said Prograis. “But when I box, most people can’t touch me.

“My thing is, I love to go to war. That’s just me mentally and why I’m a fighter. But now, when I box, it’s so easy, it’s so much easier, and at the same time, I can get people out of there, and it’s longevity on my career. I think definitely going forward; I need to box more.

“But after me and Zepeda, the winner will get Jack Catterall. I feel like Jack Catterall does deserve a chance at the belt because, of course, what happened with the decision with Josh Taylor.

“Hopefully, we can. Hopefully, me and Jack can make it happen one day,” said Prograis. 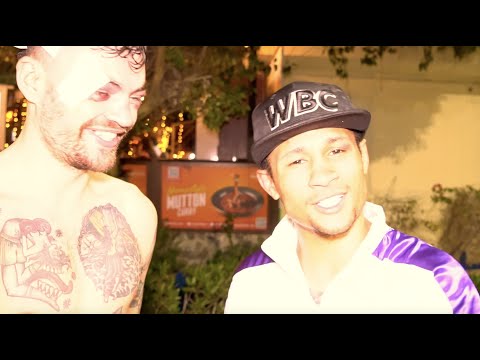 Will the contenders work for Canelo »