Buatsi vs. Richards on May 21st on DAZN – Press Quotes

Croydon’s Buatsi (15-0, 13 KOs) scored his tenth knockout when he stopped Latvia’s Ricards Bolotniks in the eleventh round of their WBA Light-Heavyweight World Title Eliminator on the third and final week of Matchroom Fight Camp in August. 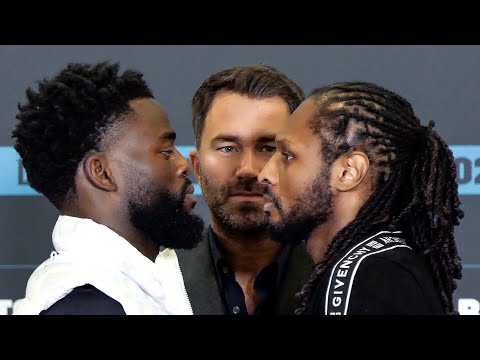 The 29-year-old was set to face Russia’s former World Title challenger Maxim Vlasov on the undercard of Joseph Parker’s rematch with Derek Chisora at the AO Arena in Manchester in December before suffering a hand injury.

“Two London boys coming together, it’s going to be a huge night,” said Buatsi. “The Light-Heavyweight scene in this country is thriving, and I’m glad that we can get one of the biggest fights made. The crowd is going to be in for a treat. I am coming to win and nothing else; I am sure Richards is doing the same. He had a close fight with Bivol, so I will want to make things straight, but I have other plans. Win well and then push onto the World Title by any means necessary.”

“We’re two top-tier fighters from the UK,” said Richards. “This is one of the biggest London domestic clashes for a long time. This is a fascinating fight for us both and one the fans will enjoy. Buatsi has got his plans, and I’m sure he will be well prepared, but nobody will stop me from fulfilling my destiny of becoming a World Champion! He is a solid competitor and will be coming to win, but I am confident and believe I have the tools to get the job done. I proved myself at world level, and I’m eager to prove that’s where I belong.”

“A big well done, and thank you to Joshua and Craig for taking this fight; it’s exactly the kind of fight boxing should be making,” said Eddie Hearn, Matchroom Sport Chairman. “Two domestic Light-Heavyweights on the verge of a World Title shot decide to put it on the line rather than wait in a queue, giving us a fantastic battle of London that can only be a thriller.”

“Who doesn’t love big domestic dust-up? And this certainly fits that description, what a great fight this is set to be,” said Ed Breeze, EVP Rights at DAZN. “With an electric Light-Heavyweight scene in the UK, Joshua Buatsi will face a big test on May 21 against former World Title challenger Craig Richards. From start to finish, this will be all-out action, all live and exclusively on DAZN.” 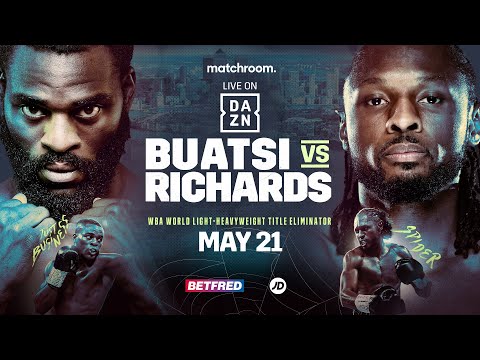 “Welcome to London, a huge press conference for a fantastic fight. I say Domestic fight, but also a fight that has such huge ramifications for the world 175lbs scene.

“Joshua Buatsi, Olympic bronze medallist against Craig Richards, a man who’s won British Titles, challenged for the World Title as well. This is a kind of fight that gets me excited, this is the kind of fight that seems so obvious. Two brilliant Domestic fighters but also two world class fighters as well.

“A World Title challenger in Craig Richards and a man that many believe is destined for greatness at 175lbs. I want to thank to teams of both fighters; you need to understand these guys know each other. One from Croydon and one from Crystal Palace, a stone’s throw from each other and they’ve known each other for many years.

“Sometimes in boxing they don’t want to make these fights, trainers, managers, advisors, fighters – ‘we’ll wait for our World Title shot’. You need to stop waiting, fighters out there that are queuing up for a World Title shot that is not imminent, don’t stall your career when you could be involved in brilliant fights, fights that could take your career to another level. That’s what we’ve got May 21 in London.”

“A few months ago, I sat in your [Eddie’s] office and said get me these fights, there’s good Light-Heavyweights in the country so it’s good to mix it with one of them. As fighters you go to shows and watch, when there’s a main event with a buzz you think I wish I was in there. I’ve got mine now, for me it’s’ now just preparing for May 21, Spider will bring his A game but I’m ready.

“I wouldn’t dub it as the hardest test, for me, it’s just the most important fight in my career right now. It’s the next fight, the fight I must win, last time with Bolotniks but this time it’s Spider. I’ll prepared as diligently as I do, come May 21 I’ll be ready.

“I have to thank Matchroom and Spider’s team, also my team, for making this fight happen. Fighters can tend to wait for the opportunity, for me currently it’s looking a bit tricky, but I’ve got a good fight and that’s what I’m concentrating on.

“I think that [Canelo] makes this a big fight for me, makes it even more important. I know what is at stake, what the reward is and that’s what I said when I was in Arizona. I’ll fight these guys as long as I know what’s next. This may lead to a World Title fight next so for me, I’m easy, no matter who it is I’m prepared.

“I’m at the point where I want to fight these guys, I want to get into these big fights. May 21 is the first stop and when we handle that, we deal with whoever is next.”

“This is nothing new, outside I’m cool and calm probably like a lot of boxers but when I’m in that ring I know what time it is. I know what I need to do, and the situation is, nice guys come last and that’s what it is in the ring. Outside the ring be how you want to be, but in that ring, I know what I have to do. In May I’ll be ready.”

“I think this was a fight that was always going to be in the pipeline, I believed I was going to get to world level, I believed he [Buatsi] was obviously destined for world level as well so we knew our paths would cross at some point. It’s a good clash.

“For myself, I want to get back into the mix, challenge and win a World Title. I think this is the bridge to cross to make that happen today.

“Obviously I’ve been thrown in the deep end a few times and I’ve just been swimming and swimming. I have no regrets because that’s what has put me in this position today, I’ve had a lot of domestic clashes, grudge matches and cross path fights. That’s all built my experience and ability to be confident enough to go in to win and win on May 21.

“I believe if I didn’t have those fights, it would be a harder fight, if this fight was scheduled without the experience. I’m ready to go, that’s what’s made me confident, I’m seeing the growth in myself every fight and every week, every day in gym. I’m just looking forward to going out and perform, showing that experience of the hard route.

“If you look at the titles I’ve won at Light-Heavyweight, I think three of the fights I was the underdog in those. When I beat Jake Ball, I was a massive underdog, they wrote me off and I went out there, delivered and got the knockout. My last title fight I was the favourite, but it didn’t mean anything different, I went out and delivered. If the bookies want to sleep on me that’s up to them. The same person is in front of me, I’m not interested in the bookies or what people say, I’ve got a job to do, and I’ll deliver.

“Josh is going to the gym to iron out all of his flaws fight by fight, what I have seen is that he showed heart and grit. I know he’s got the will to win, and he will come to win. Like the other unbeaten fighters I’ve faced, more importantly, they’ve more will to win. I know he isn’t going to come out and lie down, that’s for me to go and prepare to make sure I get the task done.

“He’s not a stupid guy, he’s very intelligent, he’s not silly enough to just gas himself up saying yeah, I’m going to walk over Richards. I know he’s going to be preparing very hard, he’s going to invest in his camp and preparing diligently for me.

“I’m not going to be looking at him thinking this is a walk over, I’ll be preparing just as hard if not harder for him. We both know we’re in for a solid fight May 21 and I don’t anyone’s sleeping in each other. I believe we’ll both be well prepared and bringing out A games May 21.

“I think I’ve got the capabilities to win in any way, the most important thing is to prepare all-round the board. I’ve got to be prepared for everything, at this level you can’t just say I’m going to win it by a jab or closing him down. You’ve got prepare for Plan A, B, C or D, you might have to get rough and ready or box and be clever. It all depends on the night, you’ve just got to make sure you’ve prepared, have all your game plans and be fit, ready and strong. On the night just make it happen, listen to your team most importantly and execute what you need to win the fight.”

Andy Ruiz Jr vs. Luis Ortiz in the works »