By Scott Gilfoid: Joe Joyce came firing back at Anthony Joshua today in reacting to him bragging about having beaten him in one round back in the amateurs many years ago before he’d developed into the heavyweight he is today.

The comment about Joshua having been given “everything” is obviously a shot at his 2012 Olympic gold medal in which he appeared to lose twice in the competition in his fights against Roberto Cammarelle in the finals and Erislandy Savon.

Many boxing fans believe Joshua should have lost his fight with Ivan Dychko as well in the Olympics, which took place in London, England that year.

Gilfoid had Joshua losing to Cammarelle, Dychko, Savon, and Zhang Zhilei in the 2012 Olympics. Joshua was a complete mess, getting outworked and lit up left and right by those fighters. The Savon and Cammarelle fights were clear losses for Joshua, and it was so pathetic that Joshua had his hand raised.

As a professional, Joshua found success through the first six years of his career, but he’s been struggling since losing to Andy Ruiz Jr. in 2019 and looked pedestrian since. It’s obvious at this point that Joshua is just a shadow of the fighter he’d once was, and he’s there to be taken by many in the top five of the division.

In Joshua’s last fight, he was soundly beaten by the undersized heavyweight Oleksandr Usyk last September in London. This was supposed to have been an easy fight for Joshua, considering that Usyk had nearly lost to British journeyman Dereck Chisora in his previous fight.

The fact that Usyk schooled Joshua wasn’t because he’s a great heavyweight. It’s because Joshua is shot at this point, and ruined by his knockout loss to Ruiz in 2019.

At this point, almost anyone is a threat to Joshua, and Joyce will likely finish his career on the spot if AJ makes the mistake of using him as his interim fight while he waits on Usyk.

And @anthonyjoshua you having a meltdown, where’s all your belts? All those sponsorships and endorsements helping? You’re a glass cannon, quit the act, you were given everything. #easymode https://t.co/4A3CCdQ3y9

Joe Joyce: “I used to have respect for that @McGuigans_Gym I take it all back. You have no respect for what I have achieved and will achieve. I’m so glad I didn’t sign with your @ClonesCyclone family. Tell your son to wind his neck in and concentrate on picking up DDD off his knees,” said Joe Joyce on Twitter.

Shane McGuigan: “As long as he doesn’t lose that rematch clause [for Oleksandr Usyk fight], it’s great for him. His confidence is down. If you’re in with someone like Joe Joyce, he’ll beat Joe Joyce,’ said Shane to Boxing Social about Joshua.

“That’s a good position for Anthony Joshua to get himself back in the mix. Not just in the mix but on top, feeling invincible. That’s what he needs to do because he’s an aggressive attacking fighter.

“And if he does so, he’s far too quick for Joe Joyce and he’ll probably beat him up and knock him out. If that’s the case, his confidence is sky-high and he’ll go into the rematch with Usyk with a lot of confidence. So I think it’s a good thing.” said McGuigan.

If Joshua had fought Joyce right out of the gate in 2013, he might have bum-rushed him to get a quick knockout.

Not anymore, though. Joshua has gotten old, his stamina and chin are both gone, as well as his self-confidence. Believe me, none of those things are ever coming back at this point. If Hearn is smart, he’ll stand on his hind legs and tell Joshua in no uncertain terms that he will NOT let him get anywhere near Joyce. 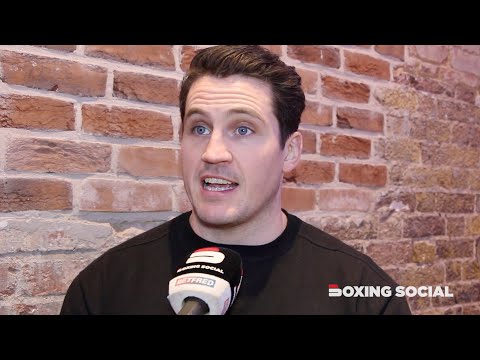 Caleb Plant to fight Anthony Dirrell next, NOT Benavidez »