Errol Spence: ‘This is my third chance in boxing’

By Allan Fox: Errol Spence Jr. feels this is the third chance in boxing for him after enduring a terrible car crash and an eye injury that could have ended his career.

IBF/WBC welterweight champion Spence has made it through those two incidents, and now he’s ready to restart again on April 16th when he faces WBA champion Yordenis Ugas in a unification fight on Showtime pay-per-view at AT&T Stadium in Arlington, Texas.

After everything that he’s gone through in the last three years, Errol (27-0, 21 KOs) knows that he can’t afford to be complacent in preparing for his fight against Ugas (27-4, 12 KOs).

Knowing what’s on the line for this contest, Spence has put in back-breaking work in training for the last four months to get his body in peak condition for his battle against the tough Cuban Ugas.

This is not the type of fight Spence could afford to come in heavy in training camp and be careless with his diet.

“I’m not blowing up in weight and wearing a sauna suit trying to lose weight against my body. At this training camp, I’ve been working with my body, and I’ve got a very happy mood right now.

“I don’t believe in a tune-up. Fighting someone of Ugas’ caliber is going to push me to the next level and keep me training hard. If I was fighting some Joe Blow or somebody I was going to knock out, I’d probably be a little heavier, sneaking chips & snacks because I know it probably wouldn’t be a long fight.

“Fighting somebody of Ugas’ caliber, I know I’ve got to be 100%. I’ve got to push my body past its limit to beat a guy like Ugas, knowing he’s going to come to fight, and he’s a world champion and a world talent too. I’ve got to bring it all out come April 16th,” said Spence.

Errol: This is my third chance

“I’ve been staying in the gym, staying focused. I feel it happened for a reason to keep my mind on track and not take anything for granted,” Spence said.

“He’s going to be a guy that is going to be hard to break him, and he’s always going to come to fight,” said Spence about Ugas. “I can predict an action-packed fight for the fans.

“A lot of fighters don’t fight at home because the fans either don’t come out and support, or they look bad fighting at home. But I feel comfortable at home. I feel happy at home, and I’m happy fighting in front of my fans and family.

“People coming out to support me means a lot to me, and I can’t wait. I’m just going to follow the game plan of my coach and keep doing what I’ve been doing in the gym.

Errol needs to stay dialed in for the remaining weeks before his fight with Ugas because this is by far the biggest test for him since his contest with Kell Brook.

The only reason Spence had problems with gatekeeper Shawn Porter in 2019 is that he purposefully brawled with him on the inside for the entire fight. It would have been a much easier fight had Spence boxed Porter the way Ugas and Brook did.

“I think it’s really great, really honorable,” said Spence when asked about his thoughts on Vasily Lomachenko and Oleksandr Usyk defending their home country Ukraine against the Russian invasion.

“That’s their hometown, and they’ve got to defend it, their family and friends. They take a lot of pride—much respect for them. I hope everybody is safe in Ukraine.

“I hope they get past this great strategy. I hope they can stop this conflict between Russia and Ukraine.

“He’s always a relevant guy because he has a name,” said Spence said about Keith Thurman. “I thought his performance was good [against Mario Barrios], especially being off two years.

“He had a good performance. He just has to stay at it, stay focused and stay hungry and he’ll get back to the top,” said Spence.

Thurman is an option for Spence if he successfully gets by Ugas on April 16th. Aside from Terence Crawford, Thurman is Spence’s best option for a big payday.

To be sure, Errol is still bitter about the former WBA/WBC welterweight champion Thurman not giving him a chance to fight for his titles during his run as a champion, but there’s too much money on the line for both for this match not to happen.

It makes a difference for fighters to start training camp already in shape rather than coming in overweight, making it a fat farm. 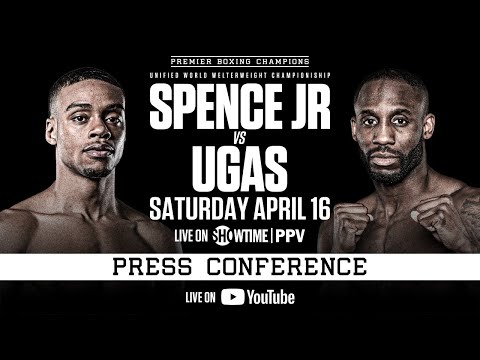 Jermell Charlo vs. Brian Castano 2 set for May 14th on Showtime »