By Dan Ambrose: Unbeaten super middleweight contender Edgar Berlanga (18-0, 16 KOs) weighed in at 167.4 pounds on Friday for his 10-round headliner bout against Steve Rolls (21-1, 12 KOs) for their fight this Saturday, March 19th at Madison Square Garden in New York.

Berlanga, 24, will be fighting for the first time since his close 10 round unanimous decision win over Marcelo Esteban Coceres last October in Las Vegas.

That was a fight in which the Top Rank-promoted Berlanga was dropped in the ninth round and took punishment from an opponent that should have been an easy mark.

Berlanga suffered a bicep tear in the Coceres fight, which helped him deflect some criticism from boxing fans. If not for that injury, Berlanga wouldn’t have had an excuse for his performance, which wasn’t anywhere close to being good.

The goal that Berlanga has is to pick up some more wins and then challenge Canelo Alvarez.

It would be good for the fans if Berlanga faces a real test before he’s given a fight against Canelo because he hasn’t beaten anyone of note to deserve that kind of a fight. The sport doesn’t need more fighters who are matched against fluff to build up a phony record so they can cash out against Canelo.

Berlanga excited about headlining at MSG

“He was walking into shots. All the shots that he was landing on GGG is because GGG wanted to knock him out and that’s what he did,” said Berlanga about Steve Rolls’ fight against Gennadiy Golovkin in 2019.

“It’s amazing. I’ve been dreaming of this since I was a kid, watching Miguel Cotto,” said Berlanga when asked what it means to him to be headlining at MSG on Saturday.

“Being here at the Garden, I watched Cotto when he fought Zab Judah and sold out the arena. Soon, we’ll be headlining there. I’m just happy that we’re doing it.

“I get into a zone where I block everything out. Nothing matters to me anymore. The only thing that matters is the fight and getting the victory. I try to block out all the BS. People try to call my phone. I don’t want to talk to nobody. I just want to focus and get the victory.

Losing is not an option

“It’s crucial,” said Berlanga when asked how important it is for him to get the victory. “I’m not at the top yet where the Canelos and the Floyd Mayweathers, when you get to that level and you take an L, you can come back and fight a big fight.

“That’s a big fight. He’s fighting Bivol from Russia, he’s crazy, especially because he came from 140 and 147, and now he’s at 175,” said Berlanga when asked about the May 7th fight between WBA light heavyweight champion Dmitry Bivol and Canelo Alvarez.

“I know he wants to make history,” Berlanga continued about Canelo. “He’s Mexican, you know? He’s Latino. I’m rooting for him in that fight. I don’t see a stoppage.

“I see it going to a decision. I see him boxing him. Bivol is a big dude, he’s a big guy and can punch, and I know Canelo is going to be on his Ps and Qs for that fight.

“That fight is in the near future for sure,” said Berlanga when asked if he’s interested in fighting David Benavidez.

“The promotion and the business have got to be right, and I got to get a couple of more fights in, a couple of more rounds in. He’s already been at that pinnacle plenty of times, so I just got to maneuver my way through and get that experience, and the fight can be done.

“Oh yeah, he’s an amazing fighter,” said Berlanga about Nico Ali Walsh. “He doesn’t have a big amateur background experience, but he’s learning and has been in the gym with me.

“He’s sparred me a couple of times and has been getting better and better. He’s a humble kid, and he’s learning day by day.

“Benavidez, Canelo, people that have countries behind them,” said Berlanga when asked who he wants to fight in the future. That’s where the money is at. We’re going the Floyd route,” said Berlanga. 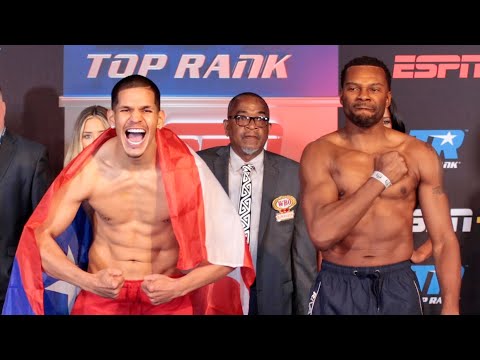