Eddie Hearn: Josh Warrington to retire if he loses to Kiko Martinez on Saturday

By Jack Tiernan: Josh Warrington (30-1-1, 7 KOs) could have his career on the line this Saturday night on March 26th when he challenges IBF featherweight champion Kiko Martinez (43-10-2, 30 KOs) at the First Direct Arena, in Leeds, UK.

Promoter Eddie Hearn believes the 31-year-old Warrington will hang up his gloves if he loses to the 36-year-old Kiko in their rematch, and you have to take him seriously.

Warrington hasn’t won a fight in close to three years since his second-round knockout of Sofiane Takoucht in 2019, and he’s looked quite poor in his last two encounters against Mauricio Lara.

Josh was stopped in the ninth round in his first fight against Lara in February last year in what was supposed to have been a warmup fight for Warrington against the finger contender.

In their rematch last September, Warrington repeatedly rammed heads with Lara until the Mexican slugger was too badly cut to continue after two rounds.

Many fans felt that Warrington intentionally head-butted Lara to get out of the fight to avoid another knockout loss, as he was getting bombarded heavily by the Mexican slugger in the first round.

Warrington’s career on the line

“I think we’ll get a great fight that are, desperate is a strong word, but especially when it comes to a world title, but in terms of them saving their careers,” said Eddie Hearn to Boxing Social on the Josh Warrington vs. Kiko Martinez rematch this Saturday night.

“I think with Kiko, especially with the middle part of his career, I remember when we used to do fights with Kiko, he was a liability. He was preparing badly, he was volatile, and he was a bit crazy.

“It seems like as he’s matured, he’s worked harder and harder, and I don’t think he wants boxing to end because it was about to end in the Kid Galahad night when he turned around a remarkable victory [last November].

“For Josh, it’s the same. To be honest with you, if Josh Warrington loses on Saturday night, he retires from boxing. So, that’s a scary thought when you love something.

“Can you imagine if the pressure was on you in this interview with me, and this was the last interview that if you didn’t get this right, your days of interviewing what be over. That’s a lot of pressure. Could you handle that pressure?

“If you love to do something and they say, ‘If you lose this, it’s over.’ That’s a scary thought because what else are you going to do in your life when you’ve given so much like something like this?

“Both of those guys are not only fighting for a world title but to hold on to what they love, and that’s why you’re going to get a great fight,” Hearn said.

“It’s hard to say ‘We’ll get a fight like Wood-Conlan’ because that was just one for the ages, but I really think we’re going to get a brilliant fight,” Hearn continued

“Warrington is never in a bad fight, and really nor is Kiko. I think touch wood, we get a brilliant fight, and touch wood everyone comes out healthy.

“I love Kiko, but, of course, I’m cheering for Josh Warrington for the 12,000 crazy fans in Leeds, but with respect to both, may the best man win.

“The first spell with Josh Warrington couldn’t have gone better. We built with Josh and Steve Wood this superstar in Leeds, where all of a sudden we went from two or three hundred traveling to Hull to ten thousand in the arena and the best atmosphere in British.

“When we parted ways and got back together again, it was a complete disaster. The pressure was on because of COVID where all of a sudden the Can Xu fight fell through, and he [Warrington] had to vacate the [IBF featherweight] title to look for bigger fights.

“He took a warmup fight in between, which happened to be the most dangerous featherweight in the world in Mauricio Lara. He lost that fight and decided to rematch him against 20,000 at Headingley.

“That gets cut short [due to Warrington cutting Lara accidentally from a handful of headbutts]. Now all of a sudden, he’s fighting for his old title on the verge of having massive unifications in America in the summer or [WBA featherweight champion] Leigh Wood at the City Ground [in Nottingham],” said Hearn.

“It’s like important for me personally because it hasn’t gone the way that we all wanted it to and if he [Warrington] wins on Saturday, we can all have a hug and say, ‘What the hell.’

“What a mad, mad sport. Now you’ve got it because the one you want more than anything was to have his big night in America. That’s what he wants,” Hearn said of Warrington.

“If you win a title now and you go into a [WBO featherweight champion Emmanuel] Navarrete or you go into a [Leo] Santa Cruz fight. It’s there for him, but he’s got to win on Saturday.

“I’ve never seen Kiko Martinez like this before. I’ve never seen him so confident. He’s almost goading the Leeds fans, isn’t he? But I love it. I really, really want Josh to win this fight because if he didn’t, this second phase hasn’t worked the way we wanted it to,” Hearn said.

Leigh Wood could be next for Warrington

“That’s sport, that’s life, but if he wins, we can do some amazing things,” said Hearn. “You’d have half from Leeds and half, and the atmosphere would be incredible,” said Hearn about Warrington potentially facing WBA featherweight champion Leigh Wood next if he defeats IBF champion Kiko Martinez this Saturday night.

“Leigh Wood is working with DAZN this Saturday, and at some point, we’re going to sit down with Leigh and Ben [Davison] and MTK and decide what is next.

“Really, I think there are three options [for Leigh Wood], four options actually. You’ve got the Navarrete fight, you have the Leo Santa Cruz fight, which the WBA may order, you’ve got the Michal Conlan rematch and you’ve got the winner of Saturday night.

“So there all in play. I told Leigh Wood, ‘If you beat Michael Conlan, we go to the City Ground,’ but we’ve got to spin it around right quick and it’s in the summer.

“So, we’ll see what happens on Saturday. Josh went to Manchester when he boxed Carl Frampton. He doesn’t have to box in Leeds, but he’s also a huge draw here, but so is Leigh Wood,” said Hearn. 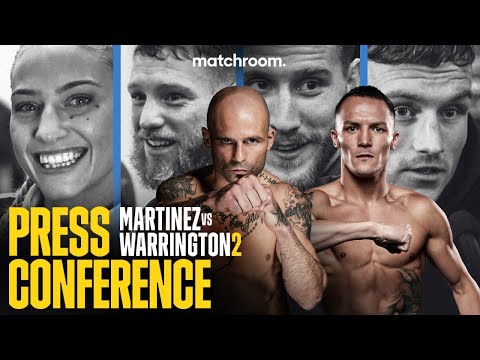