Canelo Alvarez sends message to top fighters: ‘Why they don’t fight each other?’

By Jim Calfa: Canelo Alvarez let the top fighters know that he’ll be busy this year and unavailable to face them all. In the meantime, Canelo, 31, says he would like the top guys vying for a fight against him to battle it out and he’ll face the winner.

Unfortunately, Canelo didn’t name the top guys that he was talking about because fighters like Demetrius Andrade might get the impression that he has a chance of earning a shot against the Mexican star. However, it’s unlikely Canelo would ever agree to face the talented Andrade no matter who he beats.

Canelo (57-1-2, 39 KOs) will be fighting Dmitry Bivol for his WBA light heavyweight title this year on May 7th, and if he comes out victorious in that contest, the Mexican star will face Gennadiy Golovkin on September 17th.

In the meantime, Canelo would like Jermall Charlo to face David Benavidez. Those are the only two fighters that have any shot at facing the Mexican star in 2023, apart from lesser guys John Ryder and Ilunga Makabu.

If Charlo and Benavidez agree to fight, that would wreck the two-fight, $100+ deal offered by PBC for 2023. It’s unclear if Canelo thought about that when he asked the top fighters to face each other in 2022.

Maybe Canelo doesn’t like the idea of fighting both of these fighters next year, as that would be two chances for him to lose. When you look at the badly flawed champions Canelo has faced since late 2018, Charlo and Benavidez present a jump up in quality.

I mean, you can argue that Canelo has been opportunistic & shark-like with the way he’s selected the weaker champions like Billy Joe Saunders, Caleb Plant, Rocky Fielding, and Callum Smith rather than the dangerous ones.

Who did Dmitry Bivol fight to get a match against Canelo? Bivol didn’t beat any of the elite-level top guys, and he’s still getting a fight against Canelo. What this means is that you don’t have to fight anyone good to get a fight with Canelo.

You just need to be cunning to get your hands on a title without taking risks, and then Canelo will fight you. Bivol won his WBA title beating Trent Broadhurst in 2017, and that guy isn’t exactly a household name or a great talent.

Chris Mannix: “We are here with Canelo Alvarez, the #1 pound-for-pound fighter in the world, the undisputed super middleweight champion that will be back on May 7th at light heavyweight when he takes on Dmitry Bivol.

“Let’s start here. You had many options to choose from as far as your next fight, who to work with. Why was working with Matchroom and going with Dmitry Bivol the right move for you?”

Canelo Alvarez: “Because I like this guy [Eddie Hearn] here, and I choose Dmitry Bivol because he’s a great fighter. To me, he’s the best at 175 and he has something to offer me [WBA light heavyweight title].

“I just want to make history in my career, and I’m going to continue doing it with this guy. He’s a really good fighter. I’ve seen him many times. He’s really good, knows what to do in the ring, and has a lot of experience. Right now, he’s been a champion for a long time [five years].

Mannix: “Is becoming undisputed at 175 one of your goals?”

Canelo: “Yeah, why not? I always try to do something different, and why not? Maybe.”

Mannix: “You’ll get a chance to do it hopefully over the next 18 months, but first, if you get beyond Bivol, we’ll get that third fight between you and Gennadiy Golovkin. It’s been four years since you faced Golovkin. Why was now the right time?”

Canelo: “I don’t know why now. For me, that was enough. We had this idea, and for this was the best deal, so first things first. I’m focused 100% on Bivol, and then we can see, right?”

Mannix: “Is it still personal, though, because you can Gennadiy Golovkin?”

Mannix: “There are a lot of people that want to get in the ring with you. You basically have a full year all locked up. What is your message to all the other fighters that want to face you?”

Mannix: “How much do you want them to fight each other so you can figure something out?”

Canelo: “Like I said, I know they want a payday, but I don’t understand why they don’t fight each other. They need to fight each other and then I fight the winner of them. I don’t f**** care.”

Mannix: “You were here representing Team Canelo, Julio Cesar Martinez fighting tonight. What does he have to do to beat Chocolatito?”

Canelo: “Just do what he knows. He’s a great fighter, a natural fighter. He has a lot of chances to win, and I believe he’s going to win. We’re going to see right here right now in a couple of minutes.”

Canelo: “Thank you so much.” 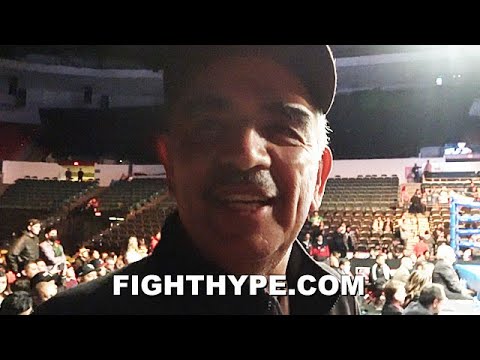 Juan Estrada vs. Joshua Franco & Bam Rodriguez vs. Rungvisai doubleheader in the works »