Amir Khan NOT retiring, will continue his sagging career

By Charles Brun: Amir Khan plans on sticking it out with his sinking career rather than hanging up his gloves after his sixth-round knockout loss to Kell Brook last month on February 19th.

Promoter Ben Shalom believes the 35-year-old former IBF/WBA light-welterweight champion Khan (34-6, 21 KOs) will continue his career, even though a rematch with Brook isn’t a viable option.

Unfortunately for Khan, his fight with Brook was so one-sided that the chances of a rematch being sold to the boxing public are unrealistic and absurd even to consider.

At this point, there’s not a whole heck a lot of options available to Khan unless he’s willing to agree to smaller paydays against some of the contenders or domestic-level chaps.

Is Khan looking for a golden parachute?

If Khan is only looking for one last payday, he might be in luck if he’s willing to be the punching bag for Eddie Hearn’s fighter Conor Benn.

He’s a guy focusing on fighting old-washed fighters exclusively, and the British boxing public doesn’t seem to mind thus far. Hearn would likely jump at the chance of making a fight between Benn and Khan if be given the opportunity.’

Khan-Benn would be a total mismatch in the true sense, but it would give Khan a chance for another payday to provide him a nice golden parachute to cushion his landing into retirement further. With another few million on top of the $40 million that Khan has already made during his career, a fight between him and

What promoter will put up the money to guarantee the vast purses that Khan and Brook would want for a second fight? It’s all well and good if both fighters were willing to accept a trifle of dough for a rematch, but that’s not going to happen.

Khan and Brook (40-3, 28 KOs) would want top dollar for another fight, and it would be insane for a promoter to guarantee them that and wind up taking a substantial financial bath.

In hindsight, it was a dreadful mistake on Khan’s part to take a fight with the heavy-handed Brook after three years out of the ring with no tune-up first.

Of course, if this was a cash-out for Khan, it makes perfect sense why he chose not to take a tune-up because the fight would have shown how shot he is, how his reflexes, speed, and mobility were gone.

“One thing I’ve realized is that he’s not going to stop fighting, whether I give him the rematch or not,” said promoter Ben Shalom to Talksport about Amir Khan choosing to continue his career after losing to Kell Brook.

“That’s up to him; he’s a fighter; he knows what happened in that fight better than any of us,” Shalom continued about Khan opting to stick it out.

If Khan chooses to insist on continuing his career stubbornly, he needs to take on a second-tier 147-pounder, someone with zero power and limited hand speed.

Khan probably isn’t good enough to beat ANY of the contenders in the top 15, and it would be embarrassing for him even to try.

Also, we don’t know how much Khan is hoping to get for his next fight. He could be sadly disappointed if he’s expecting to make the same kind of green that he got for the Brook fight.

“I don’t think the rematch [with Kell Brook] is viable right now, but he wants to continue,” Shalom concluded about the 35-year-old Khan. 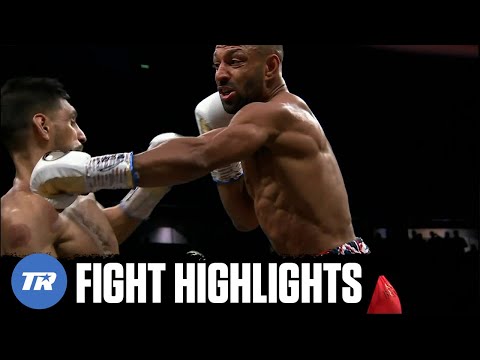 
« The Likes and Dislikes of Floyd Mayweather Jr.!