Bradley says Berlanga future NOT bright if he doesn’t improve

By Chris Williams: Tim Bradley says he sees a dim future for Top Rank fighter Edgar Berlanga unless he makes dramatic improvements in his game after his pathetic performance last Saturday night against Steve Rolls.

Bradley sees Berlanga’s situation as dire, saying he needs immediate improvements in his game for him to avoid falling victim to some of the contenders Top Rank will be matching him against.

Bradley mentioned Jesse Hart as a fighter that he believes would potentially beat Berlanga, and that guy is no longer relevant.

If Hart can beat Berlanga, it’s safe to say that his career is about to become extinct.

Berlanga looked like he lost whatever courage he came into the fight with after eating a big right hand from the 37-year-old Rolls in round four.

That was the watershed moment in the fight in which Berlanga realized that Rolls had too much power in his right hand for him to fight aggressively the way he needed to impress fans.

It was predictable ahead of time that Berlanga would quickly lose his will to fight hard. He had struggled mightily in his previous fight against Marcelo Coceres last October, particularly in the championship rounds when faded against the Argentinian.

Coceres doesn’t pack the kind of power that Rolls possesses, yet he dropped Berlanga in the ninth and had him ready to go in the tenth.

Moreover, if you saw the right hands that Rolls was bouncing off Golovkin’s chin in their fight in 2019, you would have foreseen Berlanga’s courage disappearing right away

Berlanga has got to do better

“Main event, you got to understand that. The main event and you’re in this arena and all Puerto Rican fans came out to see you,” said Tim Bradley to Fighthype on the lackluster performance by Edgar Berlanga against Steve Rolls.

“No, he didn’t get the knockout, but he didn’t land anything really significant. A couple of shots. Come on, man. You got to be way better than that,” said Bradley about Berlanga.

“You got to convince the fans that you are going to be the next. You can’t just talk about it. You got to be about it. Edgar needs to understand that he needs to bring what he did in the gym and bring it under these bright lights because I’m hearing he tears up a lot of guys inside the gym.

“I hear he looks fantastic in the gym, but when he gets under these bright lights, he becomes a deer under the headlights. You had three coaches in the corner,” said Bradley.

I wouldn’t say that Berlanga is doing fantastic in the gym. If you saw the leaked sparring footage of Berlaga getting badly hurt by junior middleweight Erickson Lubin, you wouldn’t agree with Bradley that he’s looking “fantastic” in the gym.

When a 168-pounder is getting lit up by a 154-pounder, that’s a sign that things aren’t going too well in the gym.

It’s pretty obvious at this point that Top Rank needs to rush Berlanga into a cash-out fight as quickly as possible to make the money they can before his career dissolved into meteor dust.

The way Berlanga is going, he’s going to lose soon, very soon. He should have lost last night against Rolls, if not for the generous scoring by the judges.

They were obviously giving Rolls rounds just on him coming forward and not landing anything because was eating jabs and right hands the entire second half of the fight from Rolls.

“I don’t know if they were all on the same age, and you saw a guy [Berlanga], I don’t want to say ‘timid,’ but he seemed confused. He wasn’t sure how to beat. He didn’t have an identity tonight. Normally, he’s an aggressive guy, he’s coming forward, he’s swinging blows, he’s going back & forth, and he wants to mix that action up,” said Bradley.

Well, Berlanga looked “timid” & gunshy to Chris Williams, particularly in the second half of the contest after Rolls gave him a taste of his power.

Top Rank made the mistake of not realizing how hard Rolls hits when they made this fight.

He hits harder than Berlanga’s last opponent Marcelo Esteban Coceres, who had him on the deck in the ninth round last October. For Berlanga’s fighting style to work, he needs a chin and he doesn’t have one.

That’s why Berlanga was walking on eggshells last night because he was clearly worried that Rolls was going to crack his egg, and put him down for the count.

“The biggest problem that happened with Berlanga. He’s still young. Should I write him off? No, but from what I see. Edgar needs to go back and sit down with his team and they all need to get on the same page.

“If he doesn’t, 24-years-old, the futures not bright for him,” said Bradley about Berlanga. “One more thing. You see him eating right hands?

“Did you see him getting hit with right hand after right hand? Now a smart intelligent seasoned fighter will see that and will take advantage of that,” said Bradley on how Berlanga was eating right hands from Rolls throughout the fight.

“Edgar’s inside game is not that great either. His mid-range game is good, but his inside game, you tie him up, he doesn’t know what to do.

“There are so many things I could share with y’all [about Berlanga’s flaws], but I’m going to leave it at that because I’m not his trainer.

“I’d be willing to step in and help,” said Bradley in volunteering to coach Berlanga. “If any fighter wants to talk, get in contact with me.

“If you’re important enough, get it from ESPN, Top Rank, or anybody. I don’t give my number out to just anybody,” said Bradley. 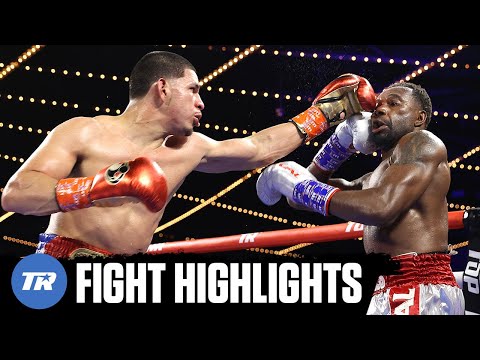