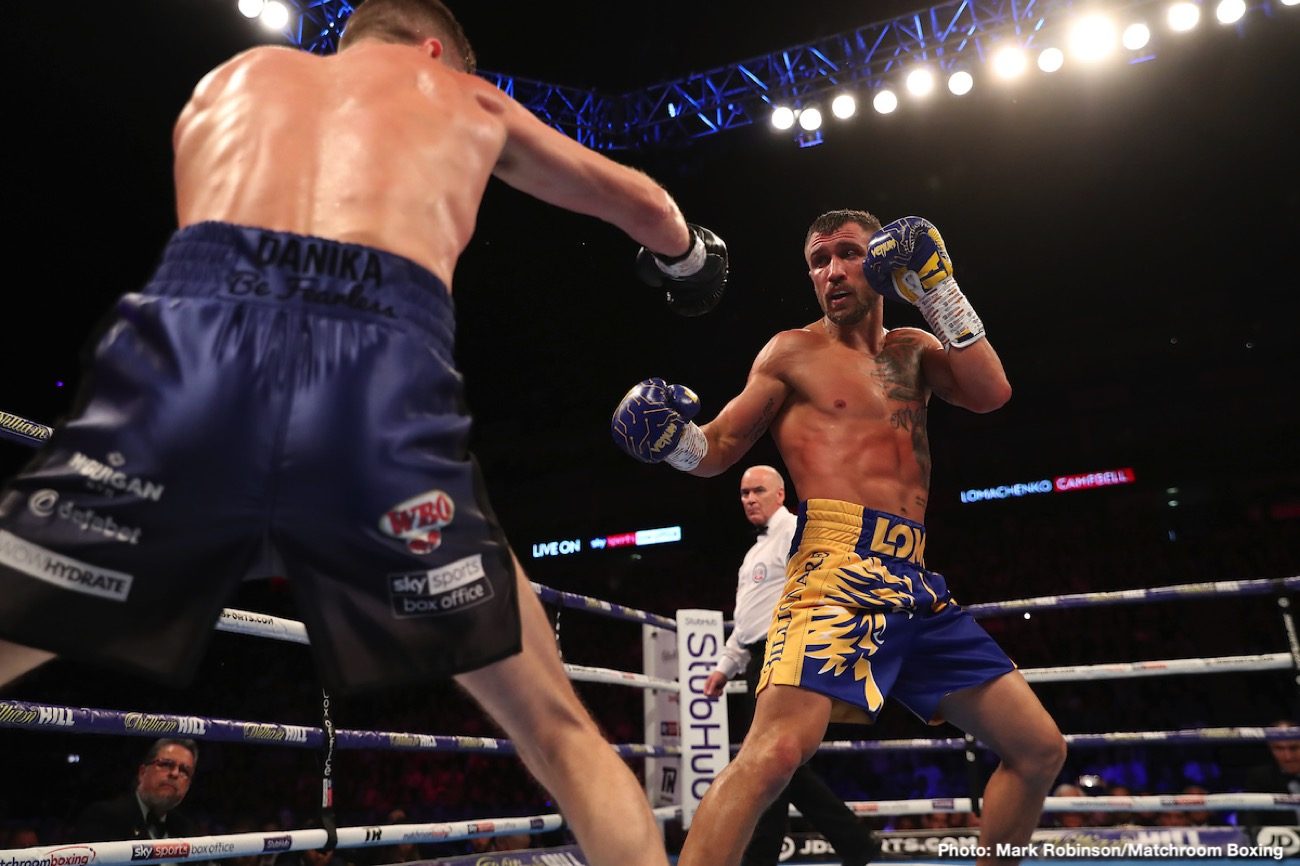 By Jim Calfa: Promoter Bob Arum greatly admires Vasily Lomachenko for choosing to return to Ukraine to defend his country against the Russian invasion two weeks ago.

Arum revealed that the former three-division world champion Lomachenko (16-2, 11 KOs) was in Greece at the time of the Russian invasion of Ukraine. Lomachenko immediately returned to Ukraine to be with his family.

Rather than leave Ukraine with his family to travel to the safety of the United States where Lomachenko has a home, he chose to enlist in the defense of his country.

Kambosos and his promoter Lou DiBella are still waiting to see if Lomachenko can possibly return from Ukraine for the June 4th fight. It’s not looking like that fight will happen, though.

The money that Lomachenko would make against Kambosos would be considerable, but it’s possible that he’ll remain in Ukraine to continue to defend his country rather than return to the U.S to train for the Kambosos fight in the summer.

“Vasyl Lomachenko, to me, is someone who is a real hero,” said Bob Arum to Fight Hub TV. “Vasyl, before this conflict broke out, he was training in Greece.

“He drove back over to be with his family to enlist in the defense of Ukraine. He could have taken his family back to the United States where he has a house. He has a green card here.

“He didn’t do that because he felt his obligation was to the people of Ukraine to stand and fight against the Russian aggression. That, to me, is real heroism.

“That hit him in the pocketbook because we had a deal in principle with [promoter] Lou DiBella for him to fight [George] Kambosos in Australia in June. That fight now is in jeopardy because he’s in Ukraine fighting for his people.

“Now there’s an edict that if you’re a military age person in Ukraine, you can’t get out because you have to fight. He was out, but he chose to go back in. So a lot of props for Vasyl Lomachenko. He’s my hero, and what he did in this situation was demonstrate tremendous courage.

“The Russians, wherever they go in Ukraine, are shelling citizens at random. His village is 15 miles from Odessa. From the reports, the Russians are contemplating an amphibious landing in Odessa, which is a major port city on the Baltic Sea, in which case, he will be in considerable danger. Right now, they haven’t gone into Odessa yet,” said Arum.

Before the war broke out, IBF/WBA/WBO heavyweight champion Usyk (19-0, 13 KOs) had planned on defending against former champion Anthony Joshua in May or June in a fight that would have paid extremely well for the 2012 Olympic gold medalist.

“I get all my information through Egis Klimas, the manager for both of them, who talks to them on a daily basis,” said Arum. “I would never suggest that a man leave his country when he feels he has an obligation in whatever way possible to defend it. To do that would be contrary to how I would act.

“I just think that would be wrong, so I would never ever suggest something like that. I’m just really proud of him and Oleksandr Usyk for taking the position that they have regarding the defense of Ukraine.

“I assume there are some Ukrainians that wouldn’t have done what Usyk and Lomachenko have done,” said Arum.

Lomachenko vs. Kambosos was done

“Everything was done,” said Arum when asked how close he was to making the Lomachenko vs. George Kambosos Jr fight official for June 4th before the Russian invasion of Ukraine.

“They had agreed to everything. Lou sent us a letter today saying that he would hold out for a little while and then he would have to go on but thanking us for negotiating all of this in good faith.

“If this doesn’t get resolved by the end of the week, Lou has to look out for his fighter. He’s been a gentleman and all of this and there’s always tomorrow.

“So, Kambosos can get another opponent, and hopefully wins and can then fight Loma later in the year, assuming the conflict has been resolved.

“Beterbiev, I was on with a journalist a little while ago, and explained to him that Beterbiev isn’t in that mix,” said Arum about IBF/WBC light heavyweight champion Artur Beterbiev not being someone that could be excluded from competing due to the call for their being a ban of Russian athletes from competing in sports.

“Beterbiev is Russian by birth, but he’s lived in Montreal for 14 years now and has the Canadian equivalent of a green card, plus a Canadian passport.

“So, at this point, he’s really Canadian rather than Russian. It really falls on somebody like Bivol and is obviously Russian and has a home in Russia. Should Bivol be prevented from fighting Canelo is what the issue is, and I have to think it out a little bit more before I come to an opinion.

“I’m not sure. I can see arguments both ways. It also goes to the justification of why you seize the assets of oligarchs. So, there are issues both ways. How I come out of that, I’m not sure,” said Arum.


« Caleb Plant to fight Anthony Dirrell next, NOT Benavidez