Edgar Berlanga getting tested against Steve Rolls this Saturday on ESPN

By Dan Ambrose: Edgar Berlanga will be in tough this Saturday night against Steve Rolls this Saturday, March 19th in the main event in a 10 round scheduled bout at Madison Square Garden in New York. The Berlanga vs. Rolls fight will be shown live on ESPN and ESPN Deportes at 10:00 p.m. ET/7:00 p.m. PT.

Rolls (21-1, 12 KOs) should give boxing fans a chance to see if the Top Rank-promoted Berlanga has improved enough to take on some of the talented contenders in the 168-lb division like David Benavidez, Caleb Plant, Gabe Rosado, Zach Parker, or John Ryder.

That was NOT an impressive performance by the Brooklyn, New York native Berlanga, as struggled in the second half of the contest in getting dropped in round nine by Coceres.

Berlanga looked great in the first half of the fight, but then gassed in the championship rounds and took a beating from the Argentinian.

You can argue that if this had been a 12-round fight, Coceres would have won because he was battering the exhausted and hurt Berlanga in rounds nine and ten.

“He had 16 first-round knockouts, and you have someone not involved with boxing talking about the boxing world, talking about him, but they’re talking about boxing,” said Shawn Porter on the Porter Way Podcast in analyzing knockout artist Edgar Berlanga’s fight this Saturday night.

“He [Berlanga] gave people something to talk about. That’s what we need in boxing, and he has star appeal,” Porter continued about the 24-year-old Berlanga.

“He then went the distance and struggled a bit in his last fight [against Marcelo Esteban Coceres]. He definitely struggled in his very last fight. It didn’t really start.

“He handled that dude and put him down,” said Porter about Berlanga’s match last year against Demond Nicholson in April 2021, a fight in which he was forced to go the eight-round distance to win.

“He’s [Berlanga] stepping up in competition, and in his last fight, he fought an experienced professional fighter and got dropped by the guy. He learned that he needs to use better defense and keep his hands up to get to a guy while punching, as opposed to just walking up on somebody.

“While being exposed, we see there’s a lot of room for growth,” said Porter about Berlanga. “Boxing is very hard to try and appease everybody, entertain everybody all the while to grow your career and be all of that. You can’t make everybody happy.

“Yo, tune in and enjoy the show, do you know what I mean? The fame came before the polish,” said Porter about Berlanga. “Simply put, he’s done what he’s needed to do to get here. Now, he’s got to do what he needs to do to stay here, and, of course, get to the next level. 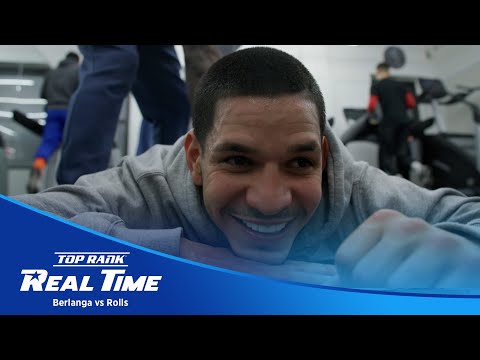