Kambosos Jr. has no interest in taking on the unbeaten King Ry (21-0, 18 KOs) and is targeting a fight against Vasily Lomachenko on June 5th at the Marvel Stadium in Melbourne, Australia.

The chances of the 28-year-old Kambosos Jr emerging from a fight against Lomachenko (16-2, 11 KOs) still a four-belt lightweight champion are mighty slim.

Indeed, Kambosos is about to become obsolete, yesterday’s news in a hurry.

What’s worse is that the deal that Lomachenko is reportedly being offered is a two-fight deal, meaning that Kambosos could be looking at consecutive wipeout defeats this year at the hands of the talented Ukrainian.

Ryan’s promoter Oscar De La Hoya, gave Kambosos some helpful advice this week, telling him that his “best option to make the most money is Ryan Garcia.”

Surprisingly, Kambosos (20-0, 10 KOs), a greenhorn in the sport, turned up his nose at the advice from De La Hoya, saying that Ryan needs to “string a few big-name wins and earn it.”

“He’s not lying,” said Ryan Garcia to EsNews in reacting to De La Hoya telling Kambosos Jr. that he can make the most money fighting King Ry rather than anyone else.

“They’ll [Team Kambosos] will see when they actually announce the fight with me how big it is,” Ryan continued. “They don’t know until they announce it how big it would actually be. 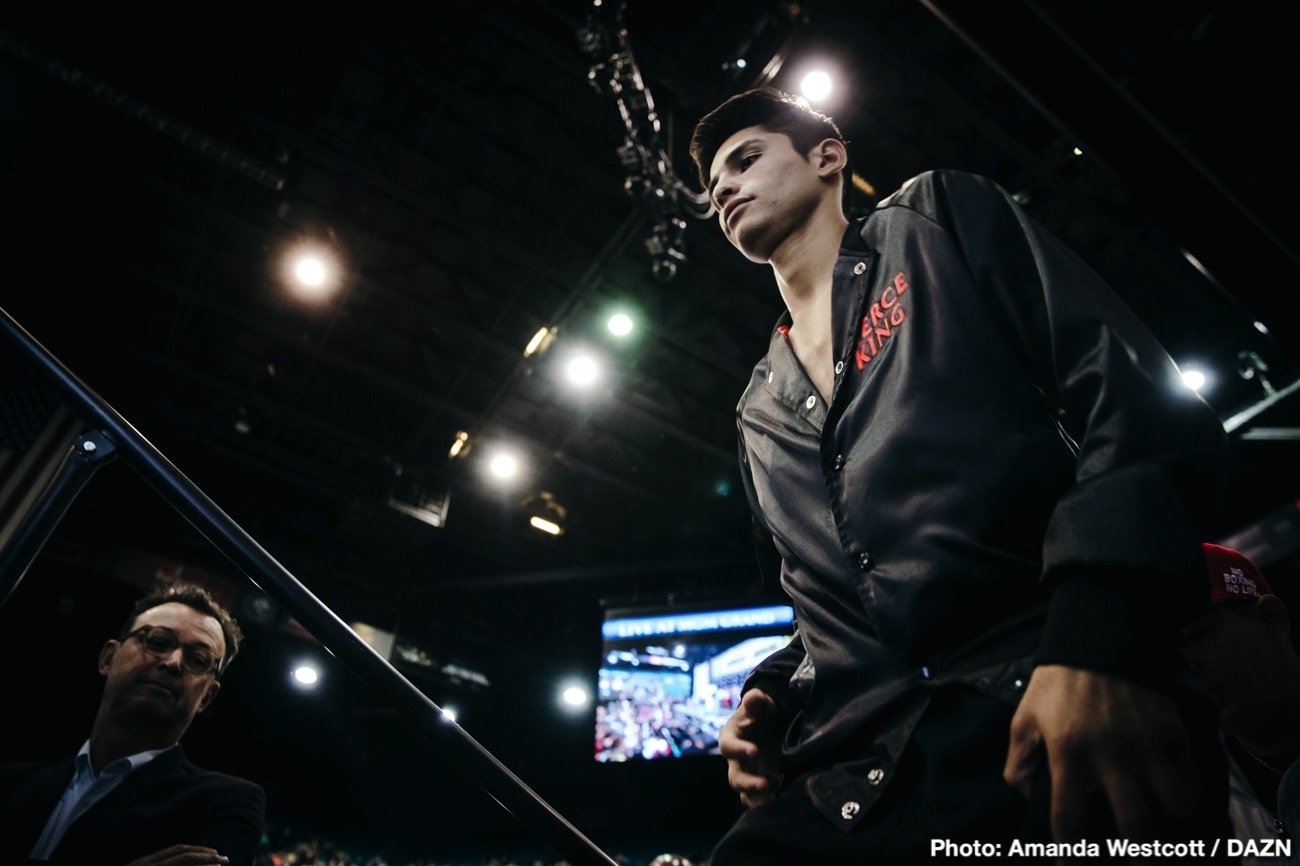 “Yeah, they can do that,” said Ryan Garcia when told that Kambosos is expected to fight Vasily Lomachenko next on June 5th.

“The boxing fans would watch it for sure, but if you want to create a big, big audience and a lot of hype around the fight, that could make a big name for yourself.

“If they’re [Kambosos] looking into the future, they should fight me, but it’s on them. I don’t care,” said Ryan about Kambosos. “I don’t care what they do actually because I know I’ll be good no matter what,” Ryan Garcia.

It would be nice if Kambosos were willing to listen to Ryan Garcia, but he seems to think he knows it all and will take the fight with Lomachenko.

Ultimately, Kambosos is the captain of his ship, and if he wants to sail into the rocky shore to sink his vessel, that’s for him to decide.

You hate to say it, but Kambosos’ win over an injured & weight drained Teofimo Lopez has planted ideas into his head, making him believe he can walk on water.

NEWS:   Ryan Garcia sounding like a broken record: 'I beat up Tank and stop him'

Lomachenko will bring Kambosos back down to earth with two crushing defeats in a row in 2022.

“It’s amazing,” Ryan said about him changing out coach Eddy Reynoso in favor of well-renowned trainer Joe Goosen. “Joe is a very dedicated trainer 24/7, watching all my mistakes if I make any and correcting them.

“He’s on top of them at all times. He doesn’t just see my talent because a lot of people would be just like, ‘Damn, he’s so quick, he’s so fast.’ But Joe, he has it down what I need to work on. I’m always open-ears and here to listen.

“You know me; I’m dedicated and always ready to go. I train from pretty much from six o’clock [in the morning] to nine o’clock at night every day. It’s more than a nine to five. It’s a six to nine.

“It was never bad blood,” said Ryan about his former trainer Eddy Reynoso. “It was about dedication and time, you know?” Ryan said when asked why he split with Reynoso.

“Eddy didn’t have the time to work 100%. He’s a very busy trainer, and I understand. Sometimes you have to make your change for the better. It’s nothing against him. He’s a good trainer.

“I won five fights with him by knockout, so there’s nothing wrong. I’m going to another level, and I need a full-on, 100% [trainer],” said Ryan.

It sounds like trainer Eddy Reynoso had too much on his plate coaching Canelo Alvarez, Andy Ruiz Jr, Frank Sanchez, and Oscar Valdez.

Finding the time to train the struggling Ryan Garcia might have been too much for Reynoso, who has a lot of guys that don’t require as much individual attention.

“Rolly [Romero] has a chance to win for sure,” said Ryan when asked about his thoughts on Gervonta ‘Tank’ Davis defending his WBA ‘regular’ lightweight title against #1 WBA challenger Rolando ‘Rolly’ Romero next.

“Tank gets hit a lot, and Rolly has some pop behind him, so if Tank’s not careful, he could get knocked out. I definitely want to give the fans that [a fight against Tank Davis]. I look forward to this year, hopefully.

“I don’t want to get people too excited. This has been a long-awaited match-up,” Ryan said of a fight between him and the unbeaten Gervonta. “But I think in due time, it’s going to happen.

“For me, it’s 100%,” said Ryan when asked who would win between him and Tank. “Everybody can think whatever they want, that I’m going to lose or whatever, but I know I have the skills to beat him.

“Big fight,” said Ryan on the Shakur Stevenson vs. Oscar Valdez super featherweight unification clash on April 30th. “That’s a close one, actually. I know Valdez personally. He’s got a good mindset, and you can never count him out of a fight.

“Shakur has a lot of skills, and he knows how to box and not get hit, so it’ll be challenging for Valdez to get to him. Being a southpaw makes it a little more trickier. I don’t know. That, to me, is almost a 50-50 fight.

Garcia is moving up to 140 soon

“It’s day by day,” said Ryan on how he deals with being a huge name in boxing for the last five years. “Fans change like the weather. One day they love you. The next, they’re on every one of your posts talking mess.

“But I think I’m at the point where they’re always going to talk s*** about me,” Ryan said about boxing fans. “I’m just getting started. This is nothing yet compared to when I start getting the big fights and start fighting the big names.

“I don’t know how big this can get. I’ll probably be at 140 very soon, especially if Kambosos doesn’t really want to fight or any of these guys. I’ll just move up. We’re going to anyways near that weight.

“Whatever Teofimo said in that interview about him going there [140], I could care less if he’s going there, honestly. Me and Vergil were going to train together. We were already talking, and we were excited.

“Me and Vergil were going to train together. He didn’t train with Eddy. He chose not to. I stay in my lane, and I post my stuff that I want to post. Whether people like it or not, I just care about continuing on what I’m doing.

“My career has been a movie, right?” said Ryan Garcia.