By Dan Ambrose: Jose Ramirez will be returning to the ring this Friday night against former two-division world champion Jose ‘Sniper’ Pedraza (29-3, 14 KOs) in a 12 round fight in the main event on ESPN+ from the Save Mart Arena in Fresno, California.

Ramirez can’t afford to lose to Pedraza if he wants to be in a position to capture one of the light welterweight titles when they’re vacated by undisputed champion Josh Taylor this year.

Former WBC/WBO 140-lb champion Ramirez (26-1, 17 KOs) is coming off a close 12 round unanimous decision loss to Taylor last May in an undisputed championship bout in Las Vegas.

Not surprisingly, Ramirez, 29, is still disappointed about the loss to the Scottish fighter Taylor, as would have won if he hadn’t been dropped twice in the contest in the sixth and seventh rounds.

Unfortunately for Ramirez, his chances of getting a rematch with Taylor are slim because he says he’s moving up to 147 following his questionable 12 round split decision victory over Jack Catterall last Saturday night.

Taylor believes that the reason he struggled to beat Catterall is because of his problems making the 140-lb limit, and he feels that he’ll be stronger at 147.

However, it’s possible that the real reason that Taylor had problems with Catterall is from the punishment that he absorbed in his fight with Ramirez.

Taylor got hit a lot by Ramirez, particularly in the second half after gassing out. Taylor was fighting on fumes from the eighth round through the twelfth and looked like he was trying to survive.

Ramirez can’t afford to look past Pedraza, 32, this Saturday because this is a top-notch fighter, who has won his last three fights since losing to the heavy-handed Jose Zepeda in September 2019.

Pedraza’s only two other losses have come at the hands of Vasyl Lomachenko and Gervonta ‘Tank’ Davis. Since losing to Zepeda, Pedraza has reeled off wins over Mikkel LesPierre, Javier Molina, and Julian Rodriguez.

“Yeah, that would have been a good idea,” said trainer Robert Garcia to ESNEWS when asked about whether he’d like to see Jose Ramirez fight a rematch with Josh Taylor. “I would have loved to.”

“Yeah, me too,” said Ramirez about wishing he could have gotten a rematch with Taylor.

“Jose wants it back and I want it back too,” said Robert on the rematch with Taylor. “Hopefully, he doesn’t move up in weight and vacates his titles. I want him to stay and maybe do a rematch.

“Obviously, we have to beat Pedraza first. That’s what we’re training for. I’m not looking past Pedraza, but I would love that rematch. It doesn’t matter,” said Robert when asked if Ramirez would be willing to fight Taylor in England.

“We’ll go to Scotland and fight him over there. He’s up there because he’s got really good skills. He became undisputed, so you’ve got to give him credit for that,” said Garcia on Josh Taylor becoming undisputed last year.

“Very view has accomplished that, but it was six rounds to six,” Robert said on Taylor’s fight with Ramirez.

“After that, Josh Taylor became one of the pound-for-pound best, and I think that’s because he became undisputed. It was a close fight. But that fight, we can say we deserve rematch because it was very close,” said Robert. 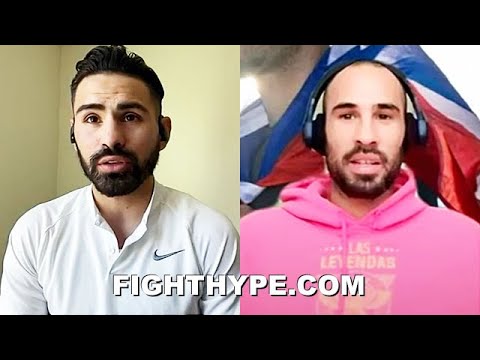