By Charles Brun: Eddie Hearn isn’t quite certain WHY Dillian Whyte has stayed silent for a solid week since Matchroom Boxing lost the purse bid for the Tyson Fury fight to promoter Frank Warren.

In making a wild guess on why Dillian (28-2, 19 KOs) is saying quiet, Hearn says that the deposit hasn’t been paid by Fury’s team and the contract still hasn’t been sent out.

With Hearn saying very little about the Fury-Whyte fight and Whyte saying absolutely NOTHING, boxing fans doubt that the fight will even happen.

Assuming that this behavior on Hearn and Whyte’s part remains a constant throughout the entire promotion of the event, it’s fair to say it will cripple it, badly hurting PPV sales, making it next to impossible for Fury’s team to make back their $41 million purse bid money.

If you’re Fury’s management, you might be thinking right now that it’s not a good idea to go through with the fight if Whyte isn’t going to help out with the promotion.

Heck, even with Whyte working tirelessly like Fury to build interest in the match, it’s going to be difficult to make back the $41 million.

But if Whyte chooses to stay totally quiet during the ENTIRE promotion, that’s going to destroy the event for sure. If Charles Brun were Fury’s promoter, I’d be thinking of walking away from this fight because it’s a bad omen right now with Whyte’s behavior.

Whyte may stay silent during promotion

However, Hearn adds that there’s a possibility that Whyte, 34, may not say a word the entire promotion of the fight, and he doesn’t seem to be too bothered by the potential of that happening.

With Hearn not in charge of the promotion of the Fury-Whyte event, it’s no skin off his teeth if Whyte chooses to remain silent up until the fight.

“A lot of people have been saying, ‘Dillian is being really quiet.’ Not really, Dillian is training for the fight,” said Eddie Hearn to iFL TV in putting a spin on Whyte’s silence since Matchroom lost the purse bid last Friday.

“I don’t know if Tyson Fury takes this fight. That’s what I honestly believe,” said Hearn.

“This man is a clown, you boys are the 1s that may not take the fight. Sign the contract big boy,” said Tyson Fury on Twitter in reaction to Hearn

“He doesn’t believe Tyson Fury will fight him,” said Hearn in making an excuse for Whyte saying silent.

“I GUESS he’s thinking ‘Until I get a contract, until everything is signed, until I get a date, until the money is paid, I don’t believe it,’ but we’ll see. He’s ready, he’s been training nonstop.

“Also, you don’t have to play to their tune, you know? Tyson Fury wants interaction. He’s goading you. He wants to see a reaction. He wants to get fired up in camp.

“Maybe Dillian Whyte won’t say a thing until the fight. Maybe we’ll fight maybe we won’t. You’ll find out on the night. Dillian is never going to play anyone’s tune.

“I think it’s quite funny. ‘Where are you Dillian?’ Nowhere, we’re hiding. Hopefully, he turns up. Hopefully, they both turn up because it’s a really good fight.

“Let them get the contracts in, let them pay the deposit and every step is closer and closer. I don’t want to say it’s 50-50 or 70-30 [that the fight will take place]. I hope any doubts I have is wrong,” said Hearn.

If Whyte chooses to let Fury do all the speaking for the marketing of the fight, it’s going to sabotage the promotion of the event.

Fury’s promoters can’t be too happy about the silence from Whyte because this is an event that will require both fighters to work hard to attract interest.

As we already know, Whyte is a terribly flawed heavyweight, who was only recently knocked cold by 40-year-old Alexander Povetkin two years ago.

Some boxing fans view Whyte as Dereck Chisora 2.0, a fighter that wouldn’t be mandatory if not for the WBC ordering an easy match against Oscar Rivas two years ago instead of one of the talented fighters.

Hearn explains why he’s not speaking on fight

“We haven’t received a contract to sign,” said Hearn about the Fury vs. Whyte contract not having been sent.

“Also, I don’t believe the deposit has been paid yet, which you have 10 days to do it. There’s no problem with the fight. ‘Oh, Dillian is quiet. Is he taking the fight?’ Of course, he’s taking the fight.

“Once we get the contract from them, we’ll look through it and I’m sure it’ll be signed and we’ll move forward with the fight and it’s a great fight.

“Until that fight is made and signed, do you want me to Tweet and say, ‘Dillian is going to.’ I’m over the moon for Dillian. We’re not talking to each other going, ‘We’re not commenting on the fight.’

“Have I gone and posted on the fight?  No, not yet. When people say, ‘You’re being quiet about the fight.’ There is no fight yet. We had a purse bid, they’ve got to pay the deposit and send the contract.  Once that contract is signed and agreed, on we go.

“Probably because he’s waiting on the contract,” said Hearn on WHY Dillian hasn’t said anything to the media since the purse bid a week ago,” said Hearn.

It sounds like Hearn isn’t sure why Dillian is silent, and if he’s not sure, why should Fury’s management go through with the fight.

If Whyte is going to drag his feet through the entire promotion, driving it into the ground by saying nothing, that’s an untenable situation.

You can’t have only Fury promoting this fight because it’s not a big enough one for him to do all the lifting himself.

If Whyte was viewed as a super talent and someone that boxing fans worldwide wanted to see Fury fight, it probably wouldn’t matter if he took a passive-aggressive approach and chose to give the silent treatment during the promotion of the fight.

Whyte is a poor substitute for Usyk in the eyes of the boxing public, which is why he’s going to need to be a team player to help out to promote this albatross-level fight to the best of his ability. 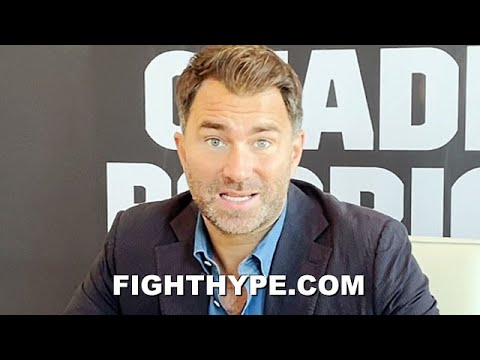