By Jim Calfa: Caleb Plant says he’s not interested in a fight with unbeaten, highly ranked 168-lb contender David Benavidez right now. The former IBF super middleweight champion Plant (21-1, 12 KOs) states that he attempted to set up fights with Benavidez, he was given the brush off by his promoter.

Even though he’s had no success in putting a fight together against the #1 WBC ranked Benavidez in the past, Plant insists that he’s still interested in fighting him in the future. Indeed, Plant believes that he will face him at some.

“I don’t know. I’ll let them figure it out. Right now, I’m just focused on me,” said Caleb Plant to EsNews when asked his thoughts on a possible fight between Canelo Alvarez and Jermall Charlo.

“I’m in the gym training, working, and I’m focusing on continuing my legacy, and I fell down and scraped knee [knocked out by Canelo in the 11th round], but I’m right back at it,” continued Plant.

It’s important that Plant get his self-confidence back because he’s looked shell-shocked ever since his loss to Canelo. Ever since that loss, Plant’s normal cockiness has been missing. In the last couple of months, Plant has looked shaken and dazed during interviews, as if he’s lost his self-belief.

The only way Plant can get back his faith is for him to get back in the ring and get a few wins under his belt, ideally against credible opposition.

It would be a bad idea for Plant to fight scrubs in hopes of getting another payday fight against Canelo because that’s not going to help build his shattered self-confidence.

With Benavidez’s popularity steadily increasing with each victory, he could soon be the star in the 168-lb, mainly if he can get a win over superstar Canelo Alvarez.

Benavidez likely would already be massively popular by now if Canelo had agreed to fight him a year or two ago because a victory over him would have made him a household name.

Unfortunately, Canelo has shown no desire to give Benavidez the fight that he needs to become a star, which is a smart move for the 5’8″ Alvarez.

If what boxing fans say is true about Benavidez being all wrong for Canelo, he would be hurting his career by fighting the former two-time WBC super middleweight champion.

Plant is making sure he doesn’t bridges with Benavidez because the last thing he needs is to get on the wrong side of the future star of the weight class.

In his last fight, Plan lost his IBF title to Canelo Alvarez in November in an undisputed clash in Las Vegas. Plant gave Canelo a good scrap for the first eight rounds but then gassed out and was stopped in the eleventh round.

“It seems like every time I try to make that fight happen, his promoter Sampson says, ‘Not right now. He tested positive for cocaine,” said Plant when asked if he’d be interested in fighting David Benavidez.

Plant will get a chance to fight Benavidez at some point, as long as he rebuilds his career correctly after his loss to Canelo. PBC will need to move Plant carefully because of his lack of punching power and tendency to gas out after eight rounds him vulnerable.

At Plant’s age, it doesn’t appear likely that his stamina and punching power will improve. You either have strength and stamina by 29, or you don’t.

The best thing Premier Boxing Champions can do is skillfully maneuver Plant as they did in the past to get him a world title if they see a champion or a fighter that they’re confident he can beat.

As of right now, there are no openings for Plant to fight for a world title. Canelo holds all the belts at 168, and he’s not going to give Caleb a rematch because it would be pointless.

“That’s happening?” said Plant when told that Benavidez may fight Demetrius Andrade in a WBC  & WBO super middleweight title eliminator. “No, I haven’t heard any news on it. I’ll let them figure it out.

“By summertime,” said Plant when asked when he’ll return to the ring for his next fight. “We’ll see—boxing changes by the day. By the time we get there,  we’ll see where the cards fall.

“We got some things on the table, some things that I’m working on. Until then, like I was saying, I’ll continue to be in the gym training and working, staying focused, and I’ll be back,” said Plant.

It’ll be interesting to see who Plant fights for his rebuilding match in the summer. He’ll likely be put in with a lower-ranked contender, but more of a non-threatening type of fighter without power.

Good options for Plant’s next fight: 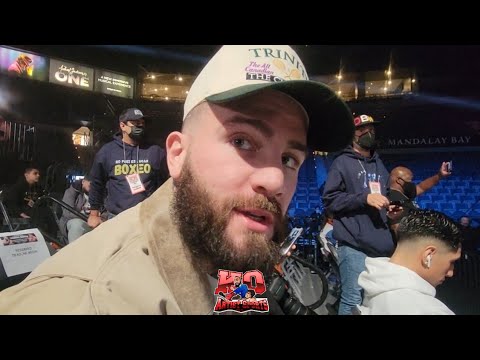 
« Liam Williams in hot water with BBBofC, for ‘Kill’ comment about Eubank Jr

Gennadiy Golovkin reacts to Eubank Jr. calling him out »