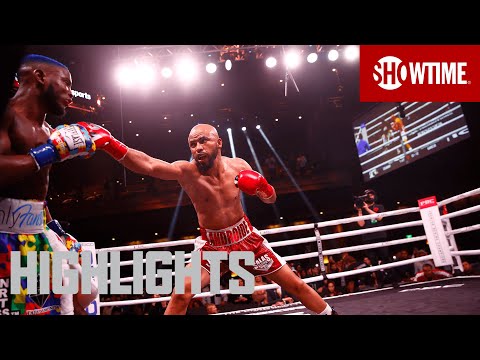 In the first three rounds, Garcia outworked Colbert. In the fourth round, Colbert came back better but not enough to take the round from Garcia, who had Colbert against the ropes for the most part.

In the fifth round, it was another good round by Garcia, who had Colbert pinned against the ropes the last thirty seconds. In the sixth round, Colbert was told to stay off the ropes and did for half a round before ending up against the ropes giving Garcia another round.

NEWS:   Serrano vs Cruz On Saturday: Amanda Serrano Preparing To Add To Her Legacy

In the seventh round halfway point, Garcia landed a left on the chin, and down went Colbert for an 8-count by Referee Kenny Bayles. He held on for the rest of the round to the end.

In the eighth round, Garcia chased Colbert, who stayed off the ropes but still got beat as the chant “Garcia, Garcia” started. In the ninth round, Colbert tried being more offensive but not enough to take the round.

In the tenth round, Colbert was starting to hold on for the most part as Garcia continued pitching a shutout. In the eleventh round, Garcia, with hands to his side, walked Colbert down. With half a minute to go, Garcia stopped with his hands in the air. Colbert was in survival mode.

In the twelfth and final round, Colbert ran to survive while Garcia pitched a shutout!

In the first round, Martinez out-landed champion Andajas. In the second round, it was a battle of body punching. In the third round, it was all action with Martinez scoring well, but Andajas ending the round well stunning Martinez. In the fourth round, the action continued with Martinez suffering a cut over his left eye midway from a clash of heads.

In the fifth and sixth rounds, the battle continued, with Martinez having an edge. In the seventh and eighth rounds, the toe-to-toe action continued with the challenger pulling away from the champion, landing more head punches.

In the ninth round, Martinez continued his attack mostly to the head of the champion. After the round, Referee Jack Reiss questioned the punishment Andajas was taken. In the tenth round, Martinez increased his lead to where Andajas would need a knockout to retain his title.

In the eleventh round, both fighters had their moments, with the challenger Martinez well in front, finishing strong. In the twelfth and final round, it was all action right up to the bell with Martinez looking like the new champion as Ancajas looked the worse for wear at the end. This will be considered already for “fight of the year!”

Scores were DeLuca 117-111, Sutherland and Weisfeld 118-110, as did this writer. Martinez dedicated the fight to his late father.

In the first three rounds, it was all Russell moving forward, outworking Postal to the body. In the fourth round’s halfway point, Postal landed his best punch so far, a right to the chin but was countered by a left to the chin from Russell.

In the fifth round, it was Postal countering and, at times, the aggressor taking what may be his first round. In the sixth round, Postal again seemed to have an edge. In the seventh and eighth rounds, Russell got a second wind taking the rounds while Postal finished strong.

In the ninth round, Russell continued outworking Postal. In the tenth and final round, Russell was ahead, landing well when all of a sudden, Referee Mike Ortega stopped the fight prematurely.

This writer had it 88-83 after nine rounds in favor of Russell, as did one judge and the other two 89-82 and winning the tenth.