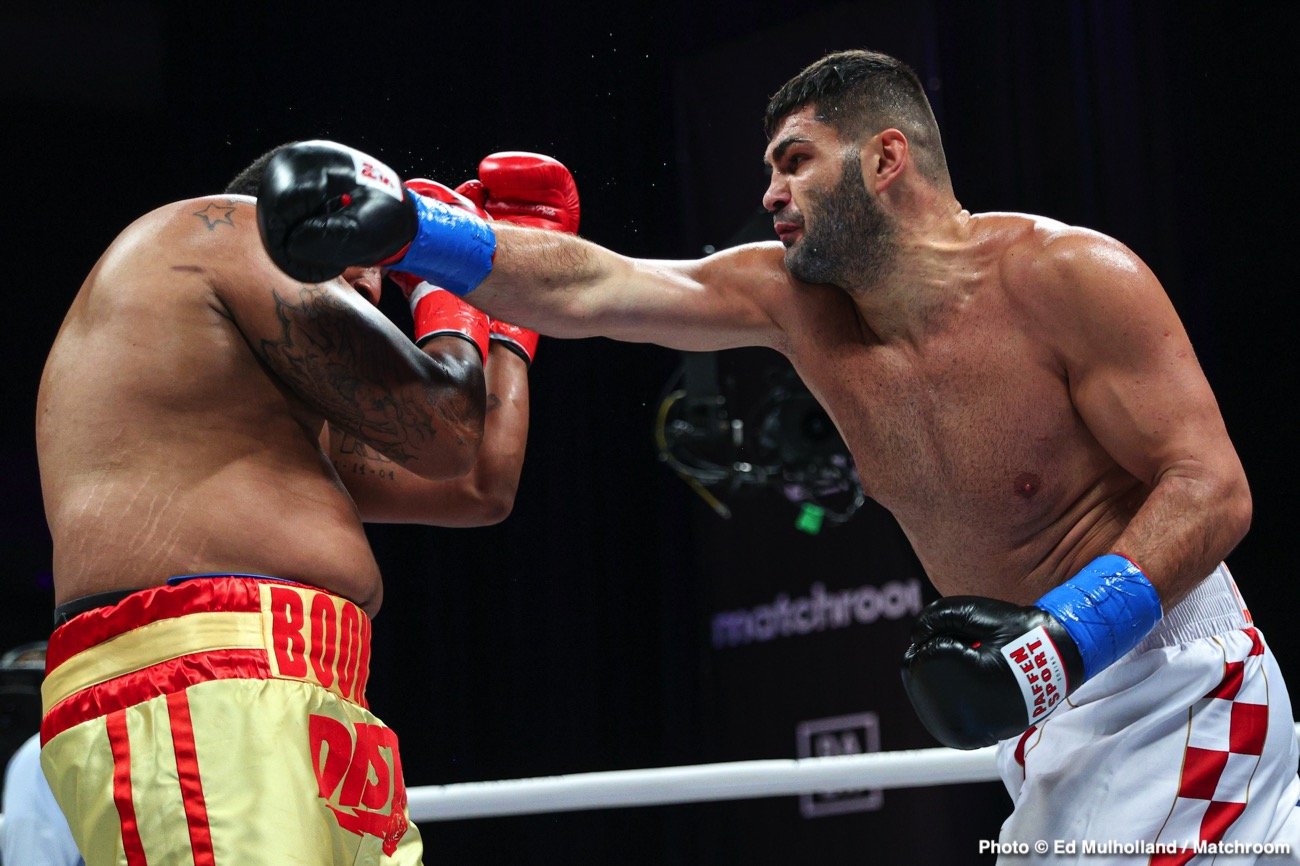 By Jim Calfa: Tyson Fury is looking forward to seeing unbeaten 2016 Olympians Filip Hrgovic and Tony Yoka meeting for the IBF final eliminator next to determine the mandatory challenger for champion Oleksandr Usyk.

Some would argue that Fury’s recent intense interest in IBF/WBA/WBO heavyweight champion Usyk’s career is based on bitterness on his part, having seen the Ukrainian dethrone Anthony Joshua last September.

What’s happened as happened. There’s no point in Fury crying over spilled milk. Usyk was the better fighter of the two, and the money that Fury would have made fighting AJ is now gone.

The victory for Usyk robbed Fury of the honor of meeting Joshua in an undisputed championship in the first quarter of 2022, which would have likely swelled the Gypsy King’s bank account with $100 million+.

Considering the massive payday that slipped through Fury’s fingers, one can understand his desire to see Usyk lose to the Hrgovic vs. Yoka winner. Unfortunately for Fury, it’s not going to change anything.

Usyk losing to Hrgovic or Yoka won’t bring back the $100 million he would have gotten fighting Joshua. That ship has sailed permanently.

Suppose Fury does face Usyk later this year after the Ukrainian retires Joshua with a second win in April in their rematch. In that case, the money that Tyson will get from fighting the Ukrainian likely won’t be anywhere near the gold bullion that he would have gotten from a match against AJ. Why? Because Usyk isn’t as big of a name in the UK or worldwide as Joshua.

The 2016 Olympic super heavyweight gold medalist Yoka (11-0, 9 KOs) already beat Hrgovic twice in the amateurs, using movement and clever boxing to get the better of him.

In the Olympics in Rio de Janeiro, Brazil, Hrgovic chased Yoka around the ring but was continually tagged with shots.

Hrgovic (14-0, 12 KOs) has had difficulty getting one of the International Boxing Federation’s top 15 contenders to agree to fight him.

Already, Luis ‘King Kong’ Ortiz and Joseph Parker have rejected the IBF’s offer for them to battle Hrgovic. Ortiz suffered a hand injury in his sixth round knockout win over former IBF heavyweight champion Charles Martin on January 1st.

As for Joseph Parker, he chose not to take the fight with Hrgovic because it was a small-money fight.

Hrgovic and Yoka are future threats to Fury’s reign as the WBC heavyweight champion, which is another reason why he might be happy to see them square off. The loser of the Hrgovic vs. Yoka fight will be one more minor threat that Fury needs to worry about.

In Hrgovic’s case, he’s had a difficult time trying to get the big fights that he’d needed to move him up the rankings and turn him into a star in the heavyweight division.

If Yoka continues his domination of Hrgovic as he showed in the amateur ranks, Fury needed worry about the 6’6″ Croatian likely for the remainder of his career.

A loss for Hrgovic against Yoka will put him back to square one with his career.

It’s taken Hrgovic five years to get to where he is now since turning professional in 2017, and by the time he claws his way back from a loss to Yoka, Fury will likely have retired, fat & rich.

Fury will have made an enormous amount of money without needing to worry about facing the dangerous puncher Hrgovic, thanks to Yoka’s help.

The beating that Yoka instilled on Dave Allen in 2010 was frightful, as he treated the British heavyweight like a punching bag, battering him with shots until the one-sided contest was halted in the tenth round.