By Sean Jones: Shakur Stevenson is predicting Gervonta ‘Tank’ Davis will beat #1 WBA Rolando ‘Rolly’ Romero by “Murder’  when the two battle it out in their WBA-ordered fight in April or May.

Stevenson believes that the only way Tank Davis can be beaten is by him facing a “special fighter,” and he feels that an “awkward” guy like Rolly won’t be capable of accomplishing that.

Negotiations have been ordered to start and should be hearing an announcement soon from their promoters at Mayweather Promotions for the date, location, and network information.

The 26-year-old Rolly Romero has the size and power to potentially beat Tank Davis, but he hasn’t faced the level of opposition needed to prepare him for this bout. These are Rolly’s best wins:

“Tank by murder. I feel like Rolly has never been in there with anyone like Tank,” said Shakur Stevenson to ESNEWS in predicting a win for Gervonta Davis over Rolando Romero.

“Other fighters that aren’t on that level and are awkward or whatever, they’re just going to get up and get in there and get beat up,” said Stevenson.

‘Jojo’ Diaz Jr’s promoters at Golden Boy Promotions might not be willing to have him walk the plank against the younger 23-year-old Pitbull Cruz. That would be a bad career move potentially if Golden Boy let 29-year-old Jojo fight Pitbull Cruz.

Both fighters are coming off recent defeats in world title fights at 135 last December,  but Jojo Diaz looked sluggish, bloated, and not an elite-level fighter in his loss.

However, there’s a huge difference in how well the 23-year-old Pitbull Cruz (22-2-1, 15 KOs) performed in his narrow 12 round unanimous decision loss to Tank Davis on December 5th in comparison to Jojo Diaz’s lackluster defeat at the hands of WBC champion Devin Haney on December 4th.

Pitbull Cruz might be willing to take the fight with Jojo Diaz for the right amount of money, as this would be a mismatch. It’s unclear whether Golden Boy will be willing to put Diaz in a fight that he would have very little chance of winning. 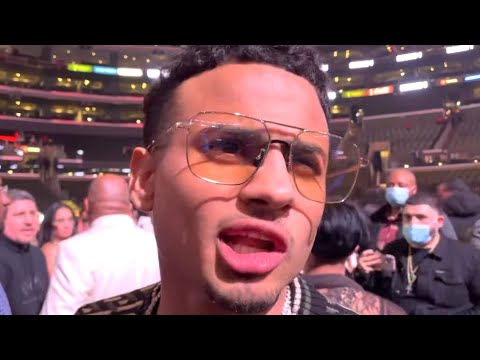