By Sean Jones: Ryan Garcia and his promoter Oscar De La Hoya say they’ve seen a contract to Isaac Cruz that they want him to hurry up and sign.

Cruz’s criticism of Ryan seems to have hit home, as he’s upset at being called an “Instagram” fighter and he wants to show the fans that he’s not just someone using the sport to increase his subscribers on social media.

If a contract has truly been sent to the former world title challenger Cruz, there seems to be a real hurry on Golden Boy boss De La Hoya and Ryan’s part for him to quickly sign for some reason.

After a year of showing no interest in fighting, former WBC interim lightweight champion Ryan is hounding ‘Pitbull’ Cruz something fierce, which is a little suspicious of the motives.

Pitbull sees Ryan as just focused on driving his Instagram and YouTube sites to increase his subscribers.

As of today, Ryan has 8.8 million followers on Instagram and 1.3 million subscribers on his YouTube channel. When you have that kind of following on social media, you’re making bank, so it makes sense for Ryan to call out top fighters.

Even if Ryan never fights any of them, just mentioning them will increase his followers, making him even more popular.

Ryan is saying he’s feeling new and recharged, and pushing Isaac Cruz to “sign the contract,” but this sounds like a strategy to pump up his followers. 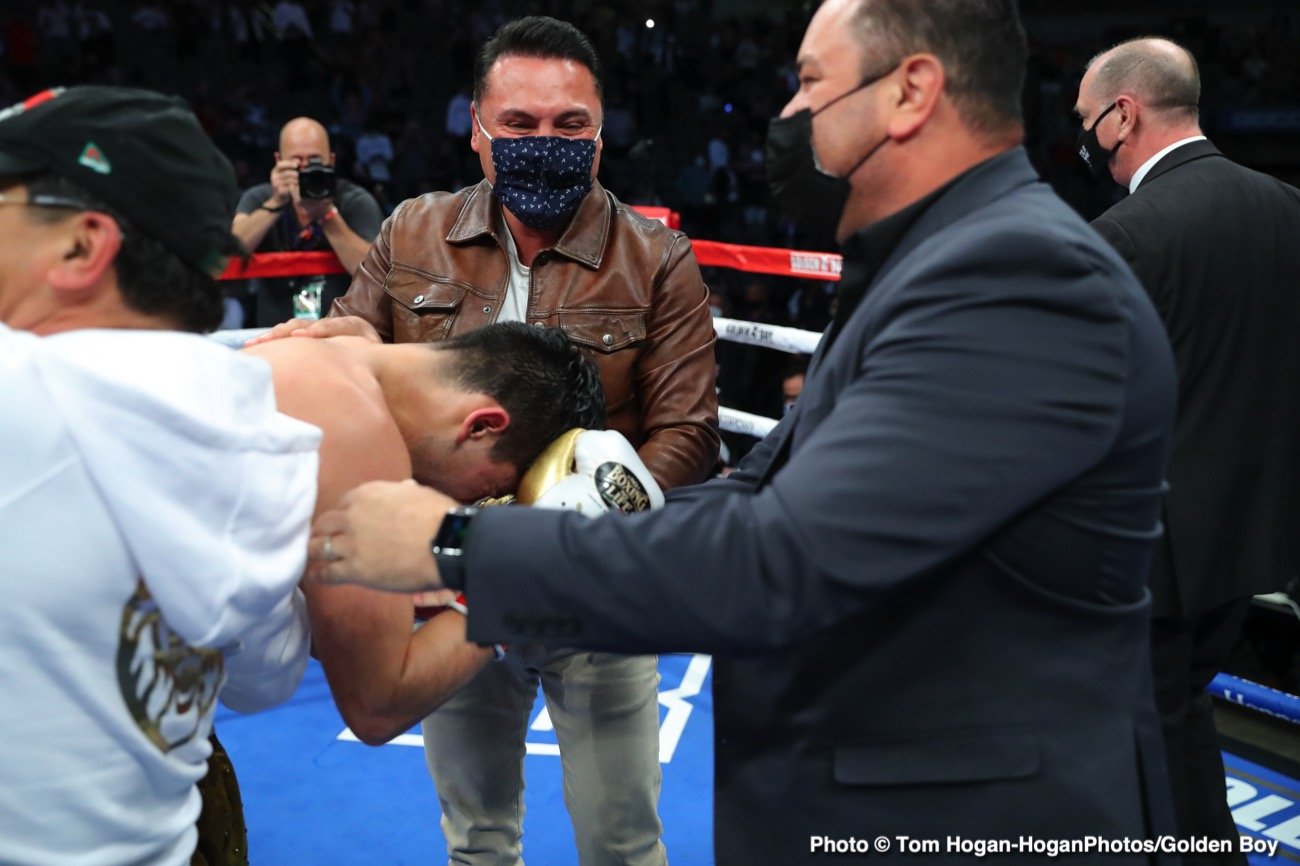 In other words, to get some cheap publicity without any true intent in taking on the dangerous Mexican warrior

Come Isaac Cruz, you said I have Glass chin, that all I focus is on Ig, you’ll find out what I’m made of once you sign that contract tired of reading your interviews when you have a contract waiting for you.

It doesn’t matter if Pitbull Cruz signs for the fight with Ryan because King Ry has been totally unreliable since last year. TWICE, Ryan was signed for fights and pulled out of them.

If you’re Ryan, it would be better for him to keep it on the down-low once he signs for a fight due to his poor track record in making it to the ring.

The fight against Isaac Cruz makes sense for Ryan, as it gives him the opportunity to let boxing fans compare his performance against Pitbull to that of Gervonta ‘Tank’ Davis, who struggled to beat him last December.

If Ryan beats Cruz in a more impressive manner than Tank did, the casual boxing fans will conclude that King Ry would beat him.

The reality is that a win for Ryan over Pitbull Cruz won’t mean anything other than he could beat an undersized lightweight with two losses already on his record.

“The first step is to get Isaac Cruz to fight and to stop wasting time. Coming from a guy that says he’ll fight me on my patio he sure takes long,” said Ryan.

“It’s unclear whether Ryan’s stated goal of a 25-0 record is the end game for him before he retires or if he wants to reach that number by the end of 2022.

Ryan said in the past that he wants to retire by the time he’s 26 now. He’s currently 23, but perhaps he’s going to cash-out after five more fights, particularly if one of them is a big-money mega-million clash against Gervonta ‘Tank’ Davis.

Ryan hasn’t been bashful in openly saying that he wants a title shot against WBA secondary lightweight champion Gervonta if he defeats Pitbull Cruz in April. Why the rush for Ryan to fight Tank after just one fight back from a year-long layoff? Well, I think you can ready between the lines. This sounds like cash-out to me.

We see Ryan more with his posts on social media now than inside the ring fighting. When he did have two fights scheduled against respectable opposition in Javier Fortuna and Joseph ‘Jojo’ Diaz Jr, he quickly pulled out of them.

Was this just about Ryan signing to fight those guys to pump up his social media numbers or was he seriously interested in fighting them? We’ll never know for certain, but it has Sean Jones highly suspicious of his motives.

Isaac Cruz wants to be paid if Ryan pulls out

Pitbull Cruz reportedly wants to be still paid if Ryan pulls out of their fight, which you can understand given King Ry’s track record in 2021. As I stated earlier, Ryan pulled out of two significant fights last year against Javier Fortuna and Jojo Diaz Jr.

So, it makes sense for Isaac Cruz to want Ryan to still pay him should he pull out of the fight for whatever reason, be it mental health woes or injury.

Cruz hasn’t shown a history of pulling out of his fights, so he’s not someone that you would have to worry about suddenly canceling.

We saw what Isaac did against Gervonta Davis in being brought in as a last-minute replacement after Rolando ‘Rolly’ Romero was pulled from the card last December. Cruz fought well enough to deserve a draw against Tank if not a win.

“I’m feeling so sharp and strong, actually faster than I was before, it’s kinda crazy can’t wait! Kinda feels like I was in the hyperbolic chamber from DBZ,” said Ryan on Twitter earlier on Tuesday. “It’s in my blood.”

It’s more talking from Ryan, and pretty much the same thing he’s been doing for the last year. Ryan is putting public pressure on Isaac Cruz, and it seems like an act without any real validity.

What makes this look even more fake is on Monday, Ryan’s promoter Oscar De La Hoya posted on Twitter and used the wrong tags for Isaac Cruz, Golden Boy Promotions, and King Ry.

How does De La Hoya not know the correct Twitter tags for his own company Golden Boy, Ryan Garcia and Pitbull Cruz?