By Dan Ambrose: Keith ‘One Time’ Thurman makes his comeback next Saturday night on February 5th against Mario Barrios in an essential fight that Keith hopes will lead to a title shot in the summer.

Some boxing fans call this a Mayweather-esque BANK heist for Thurman to scoop up millions for his comeback before disappearing back to Florida for another long layoff of 2+years.

The fact that Thurman is insisting on fighting for a world title after just ONE comeback fight against Barrios suggests that his comeback is only about money.

If Thurman were serious about reclaiming his #1 spot on top of the welterweight division, he would take his time, fighting five to seven tune-ups before looking to challenge for a world title.

For Thurman to be saying he wants an immediate world title shot after Barrios, that suggests that he’s only looking for a payday before returning to domestic life in Florida for another long layoff.

For the boxing fans that wish to see the inactive 33-year-old ‘One Time’ Thurman’s comeback, they’ll need to pay $74.95 to order the event on FOX Sports pay-per-view.

Given that this is yet another comeback for Thurman against a non-marquee fighter, it’s going to be a tough sell to try and get many boxing fans willing to pay the asking price. Since 2017, Thurman has had TWO long breaks in between fights consisting of 2 years in the last five years.

Fans wouldn’t object to paying the $74.95  price if Thurman were fighting a relevant welterweight like Vergil Ortiz Jr, Jaron Ennis, Errol Spence Jr, Terence Crawford, or Yordenis Ugas. In other words, fighters would likely massacre the Adrien Broner-esque Thurman and send him back into another long layoff.

In an interview earlier this week, Thurman went into a long ten-minute speech explaining why his comeback fight against the recently knocked out Barrios has such a high price tag on PPV.

Thurman says that everything in the economy is more expensive now, so it makes sense that his fight will be costly as well.

He then said that the undercard for his event is loaded with great fights, using journeyman Josesito Lopez as an example of one of them. Interestingly, due to an injury, Josesito has now pulled out of his battle against fringe welterweight contender Abel Ramos.

After close to three years out of the ring, the former WBA/WBC welterweight champion Thurman (29-1, 22 KOs) will be fighting the upset-minded 26-year-old Barrios (26-1, 17 KOs) at the Michelob Ultra Arena, Las Vegas.

WBO welterweight champion Terence Crawford will likely give Thurman a title shot this summer if the Nebraska native can’t get a shot at the winner of the unification fight between IBF/WBC champion Errol Spence Jr. and WBA belt-holder Yordenis Ugas.

The chances of Thurman beating Crawford after only one tune-up fight against Barrios are slim, but it’s unclear whether that’s something that ‘One Time’ is worried about.

If Thurman’s comeback is only about getting a nice payday before disappearing back to Florida for another long layoff of two years or more, him losing to Crawford won’t be a big deal. Some would argue that Thurman has become another Adrien Broner type of fighter.

Broner is a guy who captured a lot of world titles earlier in his career against beatable opposition but then became a B-side opponent for better fighters in the latter part of his career.

Thurman is now capitalizing on his earlier success with wins over Danny Garcia, Shawn Porter, Luis Collazo, Josesito Lopez, Diego Chaves, and Robert Guerrero. Those are the best fighters Thurman has been during his 15-year career.

“They gave me a few opponents. Mario Barrios was the best man, a former ex-world champion with only one loss, and everyone else had four losses,” said Keith Thurman to the Jim Rome show.

“That’s the ideal situation for Keith Thurman. I definitely want to go for the belts,” Thurman said when asked what he plans on doing if he successfully defeats Barrios on February 5th.

“I barely lost my belts in a marginal split decision to Pacquiao. I want to redeem that mistake, get in the ring with these champions and have a great fight later this summer.

“I think we can make a really big terrific fight [against one of the welterweight champions]. It’s not just because I am Keith Thurman, but I think Keith Thurman’s fights are great fights.

“I get terrific feedback from all the fans. I just love knowing that I’m one of the most exciting, let alone one of the most talented individuals in the welterweight division.

Keith expects Barrios to be tough

“Once we get this ball rolling on February 5th, we got to keep this momentum going and keep giving the fans some great fights later this year,” said Thurman.

“I didn’t want to give the critics too much to talk about me, being an elite welterweight. They’re always going to have something to say, but I think this is a tremendous fight after 30 months.

“He put on a tremendous performance against Tank Davis on a pay-per-view event,” Thurman said of Barrios. “He’s young; he’s hungry; he has a lot to show. He was willing to sign his contract, which means he wants to prove something, so I’m looking forward to the challenge on February 5th.

“We got to let that stuff go,” said Thurman about his loss to Manny Pacquiao two and a half years ago. “We’re manifesting this new me, this 33-year-old that is still in his prime and is wiser than ever,  who has learned from his mistakes.

“I just want to prove once again that I have what it takes to be the #1 welterweight. Like many great champions before me, a great champion can fall down, and we pick ourselves back up. That’s my plan this year, starting right here right now next Saturday against Mario Barrios.

“If you can’t let go of the past, how can you put your best foot forward into the now. 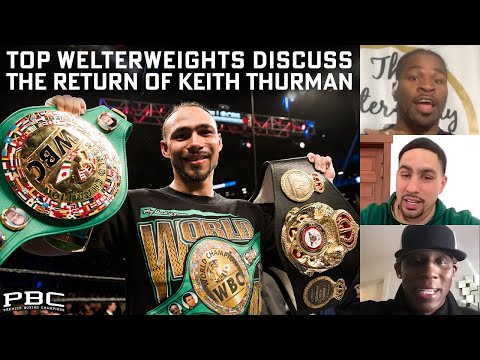