By Jack Tiernan: Eddie Hearn says the career of Danny Jacobs could be on the line for his WBA super middleweight title eliminator against John Ryder next month on February 12th on DAZN at the Alexandra Palace, Muswell Hill in London, England.

Hearn quite rightly points out that the former IBF/WBA middleweight champion ‘Miracle Man’ Jacobs (37-3, 30 KOs) underperformed in his last fight against Gabe Rosado on November 27th, 2020, in the main event on DAZN in Hollywood, Florida.

Indeed, many boxing fans had Jacobs losing that fight, and he was roundly booed by the ringside crowd that night when the scores were announced.

Ryder will have a large group of his fans turning up from nearby Islington to motivate him to get the victory over the fading 15-year professional Jacobs.

The Jacobs vs. Ryder fight winner will be mandatory for WBA 168-lb champion Canelo Alvarez, and you can’t rule out a title shot against the famous superstar.

Jacobs has already tasted big money from a fight against Canelo in 2019, making millions in a losing effort. Now, Ryder will be hoping to get Jacobs so he can get a taste of the dough, fighting Canelo to set himself up for life.

Earning a fight against Canelo will be the equivalent of the 33-year-old Ryder winning the lottery, and he would be a huge positive for his career after years of toiling away.

“I’m really pleased with this fight. Daniel Jacobs was the first guy that put his trust in Matchroom Boxing in the USA. We did a deal with him and HBO,” said Eddie Hearn to Matchroom Boxing. 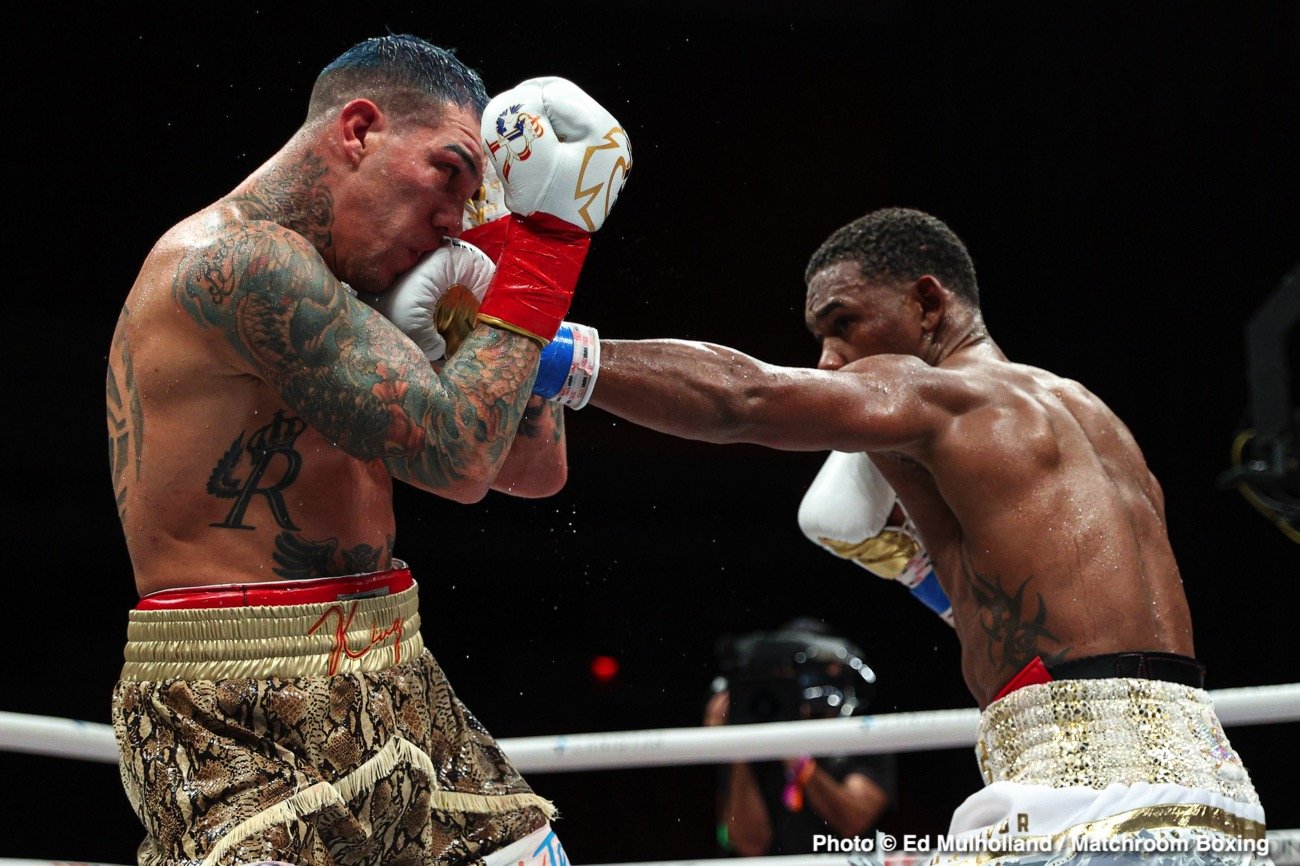 “He’s [Jacobs] always told me that one of his dreams was to fight in the UK. Obviously, he ended up fighting [Sergiy] Derevyanchenko and Canelo Alvarez, but now he gets a chance to fight in the UK,” Hearn continued about Jacobs.

“For John Ryder, Tony Sims, Charlie, those guys put huge pressure on me to deliver for John Ryder, and I’m close with all those guys. I felt a huge amount of responsibility to produce a big fight for him.

“For Danny Jacobs, it’s a must-win, and for John Ryder, it’s a must-win. That fight is likely to be an eliminator for the WBA [168] world title, and it’s a really, really good fight,” said Hearn.

Some boxing fans believe Jacobs has lost his ambition since the colossal payday he got from his fight against Canelo Alvarez. According to Celebrity Net Worth, Jacobs is now very, very wealthy with an estimated net worth of $10 million in the aftermath of fighting Canelo.

With that kind of money, you have to question whether Jacobs still has the desire to fight hard like he used to before he became hugely wealthy from the Canelo fight.

Watching Jacobs fights before facing Canelo and the ones he’s had after, it’s like night and day. Jacobs looks nothing like the fighter he’s been when he pushed Gennadiy Golovkin in 2017 and beat Sergiy Derevyanchenko in 2018.

Since his fight against Canelo in May 2019, Jacobs has looked uninspired in his two fights against Julio Cesar Chavez Jr. and Gabe Rosado, appearing to go through the motions in both matches.

Chavez Jr. initially gave Jacobs problems in their headliner on DAZN in December 2019 before quickly gassing out and covering up. Jacobs eventually stopped Chavez Jr. in the fifth after the son of the Mexican superstar Julio Cesar Chavez Sr. quit in his corner due to a broken nose.

Nevertheless, the boxing fans at ringside were unimpressed with the effort from both fighters and showered the ring with trash. Chavez Jr. and Jacobs had to be shielded during the bombardment from fans.

Hearn: Jacobs’ career might be over if he loses

Danny Jacobs could be fighting for his career on February 12th against Ryder, says Hearn. Jacobs cannot afford a loss against Ryder if he wants to stay in position for a possible rematch against Canelo in 2022.

If Jacobs loses to Ryder, it’s going to be very difficult for him to come back from this defeat, as there are far better fighters in the 168-lb division than him.

In the eyes of many boxing fans, Jacobs should have lost to Rosado (26-14-1, 15 KOs), who is a gatekeeper at super middleweight. That fight showed the level Jacobs is fighting at now.

“Jacobs had the loss to Canelo Alvarez, the victory over Derevyanchenko, the [Julio Cesar] Chavez victory, and then the draw against [Gabe] Rosado,” said Hearn.

“He really underperformed, and he’ll be looking to make a big statement. He’ll love it in London.

“It’s so great to bring a massive name over from the States to fight in the UK, and we want to see more of that in 2022. Look, Danny Jacobs’ performance against Rosado was under par, but Danny Jacobs is an elite super middleweight.

“He’s a world-class fighter, and he’s a two-division world champion. He’s a top, top, amateur pedigree, and everything,” Hearn said about Jacobs but forgetting to add that he’s about to turn 35 and hasn’t looked good in a long, long time.

“John Ryder will need to put the performance in of his career to beat Danny Jacobs that night because I think if you would have got Daniel Jacobs that came after the Chavez fight, the one that turned up for Rosado, John might be the favorite going into that fight.

“But this is not; this is a guy [Jacobs] that has a chip on his shoulder. He’s coming to the UK to do a job, and this is career-defining for Danny Jacobs because if he loses to London to John Ryder, I think that’s the end of his career.

“So, he’ll be coming to put on a spiteful performance and looking to win,” Hearn said of Jacobs wanting to impress for this fight.

Hearn says that Ryder will need a brilliant performance to beat Jacobs, but that might not be the case.

The way Jacobs has looked lately, all Ryder needs to do to beat him is to put steady pressure on him, throw a lot of punches and force him to defend.

“For John Ryder, he’ll have to put in a brilliant performance. He’s worked so hard for this opportunity. John Ryder, just down the road in Islington, will have huge support there as well. It’s going to be a brilliant fight and a really good night.

“It’s a great card on the night. We’re going to announce the undercard in the coming days for these fights. You’ve already seen big John Fisher assemble the Romper Ball army for Alexandra Palace on February 12th, and they’re probably going to fill it up themselves. So tickets on sale very soon for that one,” said Hearn on the Jacobs vs. Ryder card on February 12th at Alexandra Palace in London.

Josh Taylor not eager to fight Teofimo Lopez, says he must get in line at 140 »