By Sean Jones: Promoter Eddie Hearn is confident that he’s going to put together a deal for his fighter WBC lightweight champion Devin Haney to travel to Australia to face four-belt champion George Kambosos Jr. for the undisputed 135-lb championship in April.

Assuming Hearn is successful in his negotiations with Kambosos’ promoter Lou DiBella, this would be the stadium fight in Australia that George has been banging on about for the last two months.

Hearn feels that Haney (27-0, 15 KOs) deserves the fight with Kambosos because it would be for the undisputed lightweight championship, and the sport needs that cloud lifted to determine a true four-belt champion.

Haney holds the true WBC 135-lb title, whereas Kambosos (20-0,10KOs) is in possession of the Franchise title with the World Boxing Council, which is a giveaway the sanctioning bestows on popular fighters that they like.

What Hearn ISN’T saying is that the boxing public doesn’t care about the undisputed nonsense. They’d rather see Kambosos fight someone with an exciting fighting style rather than a boring one, which Haney would provide.

The fighters that fans would prefer Kambosos take on are these guys:

Lomachenko (16-2, 11 KOs) would be the ideal opponent for Kambosos to fight, but he’s not expected to get the chance because it would be a mismatch. Loma is a much better fighter than Kambosos, and it wouldn’t be competitive.

You can argue that the only reason Kambosos holds titles now is that his last opponent Teofimo Lopez was injured and weight drained for their fight in November.

Haney doesn’t make the list because of his dull fighting style, which involves a lot of jabbing, holding, and single-shot shots.  Devin brings out the worst elements of Floyd Mayweather Jr’s old fighting style.

For the younger fans that have never seen Mayweather fight, he was a guy that would throw jabs, single potshots, and tie up his opponents. Mayweather wasn’t known for having an entertaining fighting style once he moved up to 147 late in his career.

Haney’s far less entertaining than Mayweather, though, because he doesn’t have his speed, and he does a lot more holding. Mayweather at least would stand his ground and fight. Haney doesn’t do that.

“There’s a lot of conversations going on between myself and [Kambosos’ promoter] Lou DiBella at the moment,” said Haney’s promoter Eddie Hearn to the DAZN Boxing Show. “Obviously, we’re the two promoters.

“We’re trying to find a way to figure out how the structure of this deal works in terms of the international TV, money generated in Australia,” Hearn continued about the negotiations for the Kambosos vs. Haney fight.

“I think we’re in a decent place. I spoke to him [DiBella] this morning, which was three o’clock in the morning his time. He was up, which was working Aussie time as well.

“I think everyone involved wants to make the fight happen, from George [Kambosos] to myself, to Lou [DiBella] to Devin to DAZN. So in that respect, I think we’ve got a great chance to do so.

“We’re getting to the point now where we’re talking about the financials of the deal, which obviously is going to be the make-or-break part,” Hearn said.

Hearn better act quickly to hammer out the Kambosos vs. Haney deal for April because Top Rank promoter Bob Arum wants Lomachenko to be George’s next opponent.

If Arum comes up with a bigger off than what Hearn is presenting, we could see Kambosos go in the direction of Lomachenko. However, if the money is close, Kambosos will likely take the smaller offer from Hearn because he stands a better chance of beating Haney than he does Lomachenko.

Haney ready to travel  to Australia

“Devin has no problems going to Australia, and he said that in the message,” said Hearn. He’s getting vaccinated to do that and is halfway through that puzzle as well.

“He’s [Haney] ready, he’s ready to make that fight for the division to find out who is the true undisputed champion in the division. But always, ultimately, George Kambosos is going to want a lot of money for that fight.

“Haney is going to want what he feels is fair, and we’re getting to that moment now with Lou DiBella and DAZN. I’m confident we can make that fight because I think it’s the fight that both parties want most. Generally, when that happens, you’ve got a great shot,” said Hearn on the Kambosos vs. Haney fight.

“No, I haven’t,” said Hearn when asked if he’d heard the rumor that Golden Boy Promotions wants Kambosos to wait for Ryan Garcia to take a tune-up. “I don’t think George wants to wait around for anything.

“He should capitalize on that great victory [over Teofimo Lopez] as soon as possible, and I think we’re living in a world now where we’ve seen over the last couple of years where waiting around is very dangerous.

Lomachenko is willing to travel to Australia as well for the Kambosos fight, so it’s not a big deal that Haney is ready to travel to that country. Basically, all the four Kings are ready to take a plane to Australia to dethrone the vulnerable four-belt champion Kambosos.

Let’s face it, Kambosos is an easy mark, and there’s a deluge of fighters willing to travel to Australia to rip his four titles away from him.

“He’s [Kambosos]  been in the biggest fights, he’s taken the biggest challenges,” said Hearn in going a little overboard here. Kambosos has only been in ONE important fight against a notable opponent against an injured & weight drained Teofimo. Other than that, Kambosos’s biggest fights were against the past their prime fighters Mickey Bey and Lee Selby.

“It doesn’t matter if you call yourself undisputed, ultimately, there will always be a cloud over that situation until this fight [Kambosos vs. Haney]  happens. The winner of that fight will be the undisputed lightweight world champion, no questions asked, and that’s important.

“It’s one of the best fights in boxing. You got a young man in Devin Haney, who will jump on the plane and make it happen, and he’s ready to do so. You talk about the WBC title.

“Devin Haney wanted to win it in the ring. He wanted to fight Lomachenko, but we’re here in this position and this is a way to clean it all up,” said Hearn in trying to strengthen his case for Haney being the one to face Kambosos by pushing the undisputed angle.

Hearn can talk about the undisputed jazz until he’s blue in the face, but the boxing public isn’t listening. They view Kambosos as the undisputed, but interestingly, they STILL don’t view him as the #1 fighter in the lightweight division.

Kambosos is seen by many fans as the third-best at 135 behind these fighters: 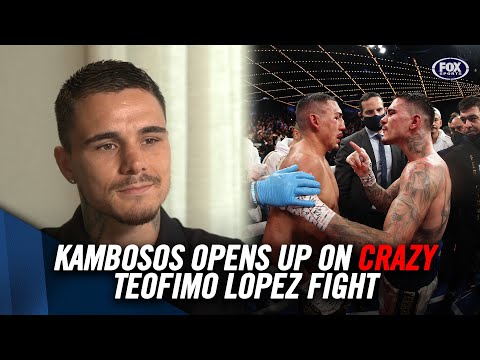 
« Keith Thurman says Mario Barrios is ‘Get back’ fight after 2.5-year layoff