Claressa Shields vs. Ema Kozin LIVE on FITE in the US 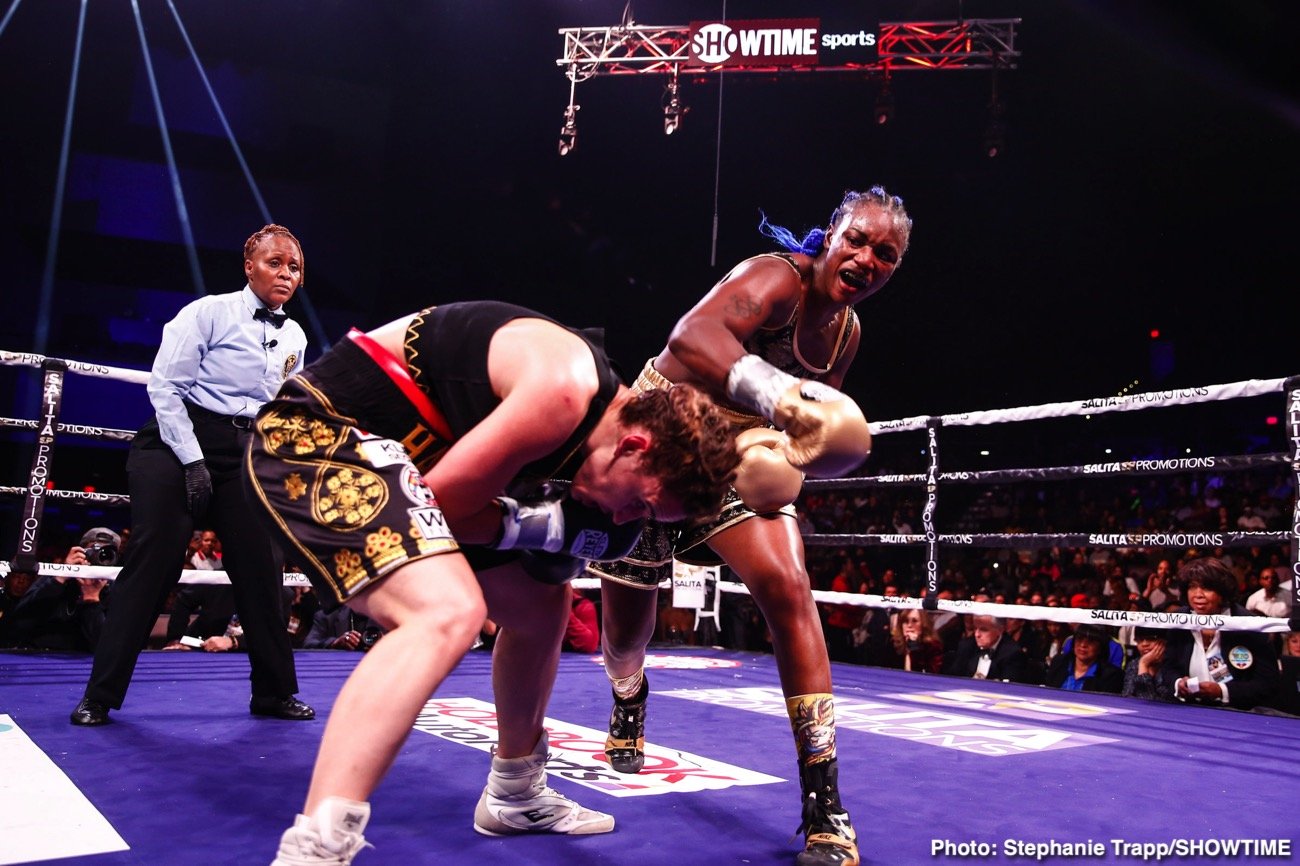 Boxing’s only two-division undisputed world champion, Claressa “G.W.O.A.T.” Shields, held a media workout in Las Vegas on Tuesday as she showed off her skills before her WBC/WBA/IBF middleweight world championship defense against #1 ranked challenger Ema Kozin taking place Saturday, February 5 live on pay-per-view in the U.S. and Canada.

Shields has moved her training camp to Las Vegas as she prepares for the altitude she’ll experience when stepping into the ring at Motorpoint Arena Cardiff in Wales for her U.K. debut as a pro. The four-fight PPV card begins at 3 p.m. ET/12 p.m. PT and features star U.K. middleweights Chris Eubank Jr. and Liam Williams meeting in the main event.

Guided by Salita Promotions, Shields signed a lucrative multi-fight deal with promoter Boxxer and broadcaster SKY Sports in the U.K. that has put her on the path toward a super fight showdown with WBO Middleweight Champion Savannah Marshall in 2022.

Shields met with media Tuesday at Mayweather Boxing Club, where she is conducting training in Las Vegas, and discussed adding co-trainer Gerald Tucker to her team and more. Here is what Shields, and her promoter Dmitriy Salita, had to say:

“I just wanted some new eyes in my camp. I’ve always wanted two different coaches with two different styles in my corner. He fits into my team perfectly.

“Gerald works with Floyd Mayweather, so he brings a different kind of boxing conditioning. He does the pads differently than how I’ve ever done them. We’re able to add some things and my coaches are totally in sync.”

On a potential showdown with Savannah Marshall:

“I’ve never focused on Savannah. She’s been focused on me. If you watch her interviews, she’s always talking about Claressa Shields. I’m definitely happy that the fight with her is getting closer. They’re going to see why I’m a 12-time champion. There is just a huge difference in what we can do as fighters.”

On making her U.K. debut as a professional (Shields won the gold medal at the 2012 Olympic games in London):

“I feel like I’m returning to my old stomping grounds. I’m excited to perform and show everyone in the U.K. how I’ve gotten better as a fighter. When they saw me in the Olympics, I was still a teenager.

“I don’t think they’ve seen my style of boxing over there yet. I’m bringing my ferociousness and my swag. I’m going to show them why I’m pound-for-pound. They should all come out and watch this fight, because I’m building all kinds of new strength and power.”

On switching from MMA training camps back to boxing:

“The mental part is the biggest thing for me. I definitely enjoy learning MMA, so when I’m back to boxing, I have to make that switch back to knowing I just have my left and my right hands. My preference is still boxing training though. I’m still getting better and learning more, even with all I’ve accomplished in boxing so far.”

“Claressa is taking this fight very seriously and is leaving no stone unturned in her preparations. From her work in the gym, to adding Gerald Tucker to her already excellent corner, which includes one of the best trainers in the sport in John David Jackson, I really think this is one of the best training camps of her career.

“I look forward to a statement-making performance against the undefeated and very capable Ema Kozin on Saturday, February 5. All of this hard work is being put in en route to the biggest fight in woman’s boxing history against Savannah Marshall.”

The four-fight pay-per-view telecast will begin at 3 p.m. ET/12 p.m. PT with Shields vs. Kozin serving as the co-main event to the highly-anticipated headliner between middleweight contenders Chris Eubank Jr. and Liam Williams. Guided by Salita Promotions, Shields signed a lucrative multi-fight deal with promoter Boxxer and broadcaster SKY Sports in the U.K. that has put her on the path toward a superfight showdown with WBO Middleweight Champion Savannah Marshall in 2022.

Marshall owns an amateur victory over Shields, the only boxing defeat she has ever suffered in the amateur or pro ranks. Shields must emerge victorious on February 5 to clinch her long-awaited revenge match against Marshall.

“I’m eager to get back in the ring and I can’t wait to return to boxing on February 5 in the U.K.,” said Shields, who is training in her hometown of Flint, Michigan with her coach John David Jackson. “We’ve been pushing through the delays so that I’m 100% ready to display my skills against Ema Kozin. I’m going to give her a beating that’s going to make Savannah Marshall regret agreeing to face me. This is going to be a performance you’re not going to want to miss.”

The 26-year-old Shields defeated the previously unbeaten and then IBF World Super Welterweight Champion Marie-Eve Dicaire in March of last year to make history and become the first boxer in the four-belt era to be an undisputed world champion in two weight classes. Shields has made history throughout her boxing life, as she is also the only fighter in U.S. Olympic boxing history to win two gold medals with wins in London in 2012 and Rio in 2016.

The pay-per-view can be purchased through the recently-launched PPV.com streaming platform from iNDEMAND, FITE.TV and will be carried in North America across all cable, satellite and telco PPV platforms. On TV, boxing fans can order the event through Xfinity, Spectrum, Contour, Fios, and Optimum, among others (U.S.), as well as leading operators in Canada. Complete PPV distribution details can be found below.

**HOW TO WATCH THE February 5 – Claressa Shields vs. Ema Kozin PPV**


« Ryan Garcia says George Kambosos should fight him next