Can Mayweather save Anthony Joshua from Usyk destroying his career?

By Charles Brun: Anthony Joshua is exhausting all efforts to find a way to defeat Oleksandr Usyk in their rematch in April. Last week, the forlorn Joshua (24-2, 22 KOs) turned to Floyd Mayweather Jr. to pick his brain while training in Dubai.

Most boxing fans are reacting negatively to Joshua choosing to ask for help from Mayweather because it’s just going to pollute his already confused brain further.

All these crazy ideas that Mayweather is planting in Joshua’s head will make him fight in an unnatural way in which he’ll be overthinking while inside the ring. It’s like a paint by the number system.

When you get an older fighter thinking about their every move, following an alien system, it doesn’t end well for them.

What former IBF/WBA/WBO heavyweight champion Joshua lacks the chin and the stamina to use the methods Mayweather is showing him, so he shouldn’t waste his time.

At 32, Joshua’s career is pretty much done, and he’s starting to go downhill due to his stamina and chin worsening.

What Joshua needs is to get with a trainer that will help him go all out for two or three rounds to try and score a knockout of Usyk before gassing out. With Joshua, he wasn’t built to last.

He doesn’t have the stamina or the chin to stick it out against a good fighter for a complete 12 rounds, and that’s why he’s starting to fall apart now that he’s facing opposition that exposes his flaws.

The last thing Joshua needs right now is having Mayweather try and plant ideas of having him box Usyk again and get schooled for a second time.

If Joshua had Mayweather or Roy Jones Jr’s hand speed when they were in the prime of their careers, he would have a good chance of beating Usyk. Mayweather and Jones weren’t the greatest fighters technically.

What made them good was their blazing fast hand speed; we saw what happened with Roy Jones once he lost his speed when he got older. He was beaten repeatedly.

In Mayweather’s case, he quickly retired once he started losing his hand speed and was lucky he wasn’t given a defeat before hanging up his gloves in his fight with fringe contender Marcos Maidana in 2014. Mayweather lost that fight but was given a controversial decision.

This is a strange move by Joshua to choose to be helped by a lifelong pure boxer like Mayweather for his rematch with the talented 2012 Olympic gold medalist Usyk. I mean, we already saw Joshua attempt to outbox Usyk, and the results were poor.

It’s only evident that if Joshua uses Mayweather’s methods of fighting:

Those tricks won’t work for Joshua against a skilled operator like Usyk, who has seen all Mickey Mouse garbage in the amateurs and knows how to defeat it.

Joshua is willing to listen to Mayweather makes it clear how hopeless his situation is.

What Joshua should do is go back to how he fought while in the Olympics, in which he was going all out to try and score s knockout of Usyk within three rounds.

If Joshua chooses to box Usyk, he will gas out after three rounds anyway and wind up getting schooled or knocked out in the rematch. At least if Joshua shoots for an early KO, he has a chance. 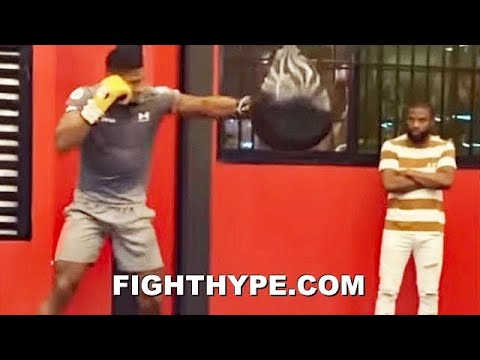 At best, the only thing Mayweather can help Joshua with for the rematch is to teach him how to run, but he’s capable of doing that without his help.

The unbeaten former boxer Mayweather had previously mentioned wanting to help the 32-year-old Joshua react to his one-sided loss to Usyk from September 25th at the Tottenham Hotspurs Stadium in London.